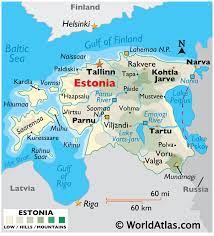 Yet another shake-up among Schwab’s leaders. Estonia’s Prime Minister Kaja Kallas stepped down from her role on a technicality before being reappointed a day later. Kallas’ Reform Party reached an agreement with the Social Democrats and Isamaa Party to form a new three-party coalition.

Estonia shares a 180-mile border with Russia and has strongly supported Ukraine before the war began. Estonia is a small nation with a population of around 31 million and a GDP of $36.29 billion USD. Their inflation rate is among the highest in Europe after spiking to 22% in June.

Estonia has a large Russian population but has the comfort of being a NATO nation. The new government is aiming to eliminate their Russian ties by banning Russian from being spoken in school. Russians and Belarusians now have a more difficult time immigrating to Estonia or even traveling there without a visa.

Estonia is cracking down on potential spies or intelligence agencies at the border. The poster above has appeared around the border, with the government encouraging people to turn in anyone who they suspect is involved with Russian intelligence agencies. Kallas also has the epigenetic fear of her neighbor as her mother, grandmother, and great-grandmother were once deported to Siberia. The small nation will use its strategic position to help the West’s proxy war, and Kallas herself said that negotiating a peace deal with Putin is off the table.

“For us, it is important to not make that mistake again like we did in Crimea, Donbas, Georgia,” she said. “We have done the same mistake already three times saying that, you know, negotiations, negotiated peace is the goal. … The only thing that Putin hears from this is that ‘I can do this because no punishment will follow.’”

War is Never What it Seems

A year ago, school districts got a windfall of pandemic aid. How’s that going?