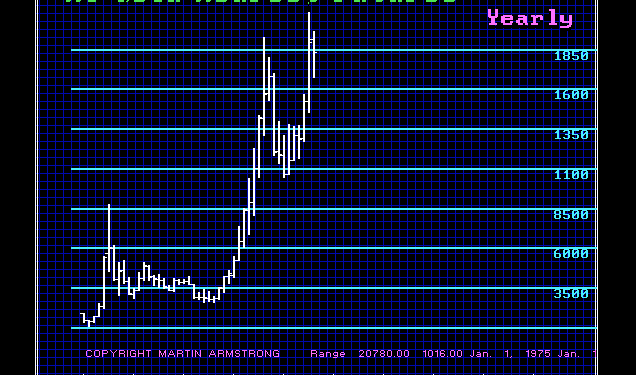 QUESTION: OK. How did Socrates know that they would find 31 million tonnes of gold in Uganda to create a bear market? I really want to hear this one.

ANSWER: I believe that the answer lies in the very same reason I found it has been able to forecast war. Someone has information BEFORE it becomes public. That then impacts the capital flows and market movements. The computer is monitoring everything and it is picking up the very subtle trends that are ever so insignificant to the eye. You are too caught up in the fundamental nonsense. The movie, The Forecaster, showed that the government wanted the source code. To produce such a film, they have to have liability insurance. Llyods of London insured the film and EVERY allegation had to be documented to them in order to even do that film right down to their demand for the source code to Socrates.

This is why some people trolling for the “establishment” or for “government” are so desperate to prevent people from looking at Socrates. They want you to buy the BS and the lies to keep you blind to reality. They are like pretend fact-checkers such as SNOPES who swore that there was no validity to COVID being produced in a lab – it was a natural evolution. Every one of the so-called fact-checkers are funded by the very people they claim to be fact-checking.

Socrates is monitoring everything. Here is the Silver to gold ratio. Notice it is NOT a straight line. This is because, throughout history, the gold and silver discoveries have not taken place at the same time. Hence, the ratio fluctuates wildly since 1792.

Putin: G7 Leaders Undressing Would be a “Disgusting Sight”

Putin: G7 Leaders Undressing Would be a “Disgusting Sight”

Is democracy failing and putting our economic system at risk?