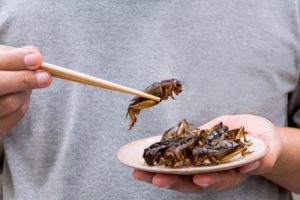 Bill Gates’ dream of a meatless Utopia is coming to fruition one insect at a time. Aspire Food Group of Canada announced that it has created an “alternative protein manufacturing facility.” They are not referring to soy or plant-based alternatives but are encouraging the consumption of crickets.

The facility will produce 9,000 metric tons of crickets annually for both pets and humans. I personally would not even allow my dog to eat this pest. So, the plan is to distribute two billion bugs across the US and Canada. Crickets were previously sold to fish bait and pet shops (reptiles) for around $12 for 250 crickets, according to some estimates. The average female lays up to 10 eggs per day for the duration of her short lifespan. One square feet can hold an estimated 1,000 crickets, making this a much easier alternative to raising traditional livestock. Crickets require less space than cattle and allegedly produce less CO2 despite the fact that livestock is not the main culprit.

While other nations have eaten insects for centuries due to a lack of alternatives, the West has not been exposed to this diet. An article in Farmer’s Weekly noted that bacteria contamination is associated with both wild and farmed insects, including the genera Staphylococcus, Streptococcus, Bacillus, Pseudomonas, Micrococcus, Lactobacillus, Erwinia, Clostridium and Acinetobacter, as well as members of the family Enterobacteriaceae.

Expect the media to normalize eating bugs. Perhaps Ina Garten will do a special on how to roast them for your next gathering. However, we have always had the resources to eat fresh produce and animals that are traditional to Western culture. The idea that eating insects will somehow save the planet from mass climate destruction is absurd.

How Threat-Free Are Americans from COVID-19? Late March 2022 Update

The State of the Union is…