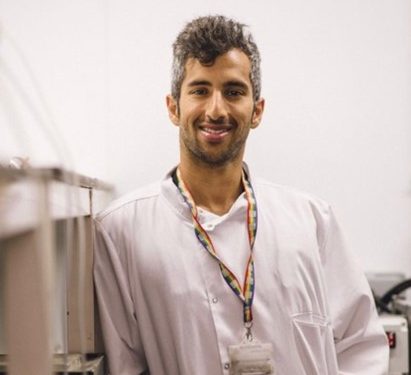 To celebrate UK Pride Month, the British Ecological Society journals have re-launched ‘Rainbow Research’ – a blog series which aims to promote the visibility of STEM researchers from the LGBTQ+ community by connecting each post to a theme represented by one of the colours shown in the Progress Pride flag.

In this new post, Numair Masud, a Senior Research Technician from Cardiff University, UK, discusses the concept and importance of seeking sanctuary with regards to his identity as a gay refugee from Pakistan.

For this Pride Month I pause to reflect on where we as a society stand on the rights of LGBTQ+ people. I have the distinction of being a gay man who is also a refugee and occupy that grey space on the Venn diagram of humanity we call intersectionality. It is fitting that for this Pride Month, which intersects with International Refugee Week, we consider some of the progress, challenges, and potential solutions faced by LGBTQ+ individuals. Consider that the UK government is currently attempting to deport potential asylum seekers to Rwanda to have their applications considered. This is particularly concerning for LGBTQ+ people as Rwanda does not have any anti-discriminations laws that can protect LGBTQ+ individuals. It has already been noted (but not emphasised enough) in the mainstream media just how in breach of international law the current Home Office’s decisions are—particularly in relation to the UN Refugee Convention1. Why should anyone reading this article be concerned about the plight of LGBTQ+ sanctuary seekers, if they themselves are not within this category? Note that I am using the term ‘sanctuary’ now rather than asylum seeker, refugee, or alien. These are traditional terminology commonly used to denote humans in internationally recognised documentation on human rights. In due course you will understand why I use the term sanctuary seeker over the other more commonly used terminology. I will also highlight how we, as ecologists, may be more inclined towards appreciating diversity compared with other scientists.

As a refugee, I claimed asylum while completing my PhD in the UK. I cannot begin to describe the legislative hoops asylum seekers have to jump through—especially LGBTQ+ individuals—to reside in the UK. The amount of time and mental energy I spent worrying about my immigration status, safety, and security is not something any rational human would consider conducive to the scientific endeavour. For instance, consider that if I had to travel for an international conference or ecological field work, as someone with no access to a passport in addition to being a gay man, I would face unique challenges. This came to pass in Mexico City when I was detained for hours, having had my phone confiscated, because the immigration authorities were suspicious of my Home Office issued Travel Document. Also consider that had I been to a country where being gay is a criminal offence (currently about 54 United Nation member states, of which about 15 have stoning as a potential punishment for same sex intercourse2), conducting field work could put me in serious danger due to a mere slip of the tongue. How can ecologists, and indeed all researchers in the UK, help with this serious issue? Here is where higher education institutions can act as sanctums for vulnerable individuals.

The diversity of burgeoning talent that passes through UK university doors every year is impressive. How we choose to manage and treat the diversity of our students will have a direct impact on how they develop as potential scientists. Consider that we almost take it for granted that the diversity of biota (particularly genetic diversity) is a key resource to preserve and cherish. At what point did that principle of preserving and protecting diversity fall short at humanity’s feet? It is plausible to envisage that researchers in the ‘hard sciences’, often far removed from studying life’s diversity, may find it challenging to appreciate the inherent value in diversity. Ecologists should have no such excuse. Higher education institutions can and should declare publicly that they will be institutions of sanctuary for those seeking it. This is a goal within our reach. Currently, a national network of universities exists comprising staff and students who have come together to ensure that higher education is a place that is safe, supportive, and empowering for those seeking sanctuary. The Universities of Sanctuary network is an excellent opportunity for UK universities to pledge and demonstrate how they will endeavour to live up to the Universal Declaration of Human Rights3—widely considered the most important framework for enshrining human rights as inviolable. Specifically, Article 26 of the declaration commences with a simple sentence we must surely all agree to: ‘Everyone has the right to education’. This right to education is strongly linked with Article 13, which states that everyone has the right to freedom of movement, especially pertinent to field ecologists who may need to travel routinely. Therefore, it is incumbent on higher education institutions to have dedicated departments that are actively aware of the key challenges and mitigation strategies in place for LGBTQ+ individuals who are travelling to countries with anti-LGBTQ+ laws.

Even at an executive level, we can witness increments of positive change. For example, the UK government in July 2021 introduced the Graduate Visa scheme which allows international students to stay for a maximum of 2 years after their studies are completed. This was a huge improvement from the previous scheme, providing more flexibility for students who may be seeking gainful employment. Unfortunately, there are still hostile policies woven into the fabric of how we treat immigrants, including our students. Even now, skilled international graduates, which includes vulnerable individuals such as LGBTQ+ asylum seekers, have ‘No Recourse to Public Funds’ (NRPF). In essence, this scheme states that if you are under immigration control as determined by the UK government (an extensive list that includes asylum seekers and international students) you cannot access the majority of welfare support. Hopefully, I will not need to convince the reader how troubling this is from an ethical perspective. Hereto we have a moral obligation to have our voices heard at the voting booth. We must do our homework and consider carefully and critically who it is we are supporting and what immigration policies and reforms they are suggesting. Recent memory of the Brexit debacle can remind us that incautious and uninformed voting can have major consequences.

I will end on a positive note. Ecologists have access to a diverse world of wonders that can be understood and marvelled at. By extension, therefore, we must also have the ability to understand each other through that very same appreciation of diversity. In a world where humanity’s differences may seem all too obvious to ecologists, we may forget how baffling it may be to some who cannot seem to make sense of these variations. If any ecologist reading this article agrees that we have this great privilege of being able to question the world around us and directly profit from it in our careers, we must also be generous in offering this transferable skill to others. We must try to encourage others to ask questions, be curious, and not surrender so easily to the fear of that which is different. For this Pride Month, perhaps ecologists can pledge to openly discuss how their techniques and methodologies have led to a greater understanding of the world around them and how this can be used to increase our understanding and appreciation of each other. This may well lead to a simple acknowledgment that diversity is an asset, and, in doing so, humanity might be taking a few steps closer to greater unity.

US Marines Safe from Religious Prosecutions – Coast Guard Under Attack