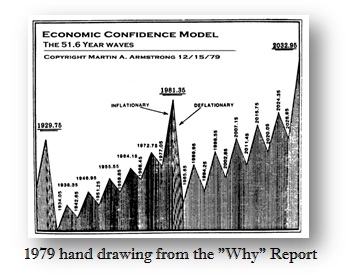 QUESTION #1: Marty, do you think it was destiny that you were somehow intended to discover the hidden order behind the Business Cycle?

I have a friend who has been working on getting Roe v. Wade overturned.  In a groups chat, my daughter mentioned to him how this was going to go into the history books and their generation will be telling our children about it.

It then occurred to me that this could go down in the history books in ways that most do not yet perceive. If your models are correct, this may well be one of the “Ft. Sumpter events” that ultimately lead to a regional breakup of the U.S. by 2032.

Out of curiosity, when did your models first forecast the 2032 breakup?

ANSWER: This is all part of the decline and fall of the United States. There is no constitutional right to abortion any more than there is a constitutional right that the government must provide you with medicare. The Constitution is NEGATIVE, not positive. Read the language of the 5th Amendment — “No person shall be held…” It is a restraint upon government; it is NOT a positive list of rights. Read the text! It is always in the tone that the government shall not do whatever. They held that implicit in the 5th Amendment, there was a right to privacy. That was in the context of Griswold v Connecticut having to do with condoms. That was fashioned into Roe v Wade, and it was crafted to REDUCE the population of minorities. It was a racist decision. Justice Ginsberg made that clear, and she stood for women’s rights.

People then tried to force the government to pay for abortions. That is when HARRIS v. McRAE, 448 U.S. 297 (1980) was decided to point out that the Constitution is NEGATIVE, and thus no right compels the government to pay for abortion. From a legal perspective, there is NO right to abortion any more than there is a right that the government must pay for your healthcare, divorce, or any social benefits. This is the problem of SOCIALISM and that politicians have misrepresented the Constitution to win office on a pure lie.

The rhetoric that a woman’s life cannot be saved in a dangerous birth is absurd. The law in question limited the abortion right to within the first 15 weeks. The facts do not support this rhetoric. There is just this toxic absurd claim to some constitutional right that never existed. It will further divide the states, and I would welcome the separation of the United States. It is absurd that the assumed power of Washington can force social laws upon the whole, as it merely invites the destruction of the United States. Similarly, such measures destroyed Rome.

As Edward Gibbon (1737-1794) wrote in his “Decline and Fall of the Roman Empire:” “The possession of wealth stimulated the diligence of the informers; rigid virtue implied a tacit censure of the irregularities of Commodus; important services implied a dangerous superiority of merit; and the friendship of the father [TRUMP] always insured the aversion of the son. Suspicion was equivalent to proof; trial to condemnation. “

As much as things change – they always remain the same. The name just changes.

I first published that forecast of 2032 back in 1979. That is when I published my findings in what I named the “WHY Report.” I don’t have a single copy of that report as it was lost in the allies of time. I did expand it and republished it again in 1981 after it successfully picked the 1981 high in interest rates. The second edition was published once more in July 1983. I have at least one copy of that one. I hear they all go for well over $1,000 these days; I should probably buy the first two.

I found it very interesting that perhaps I was destined to discover this model after the fact that it was accurate to a day because it was based upon pi – 8.6 years = 3,145 days. Note that the office address was Suite 314. The house I grew up in was 314 South Lippincott Ave, Maple Shade, New Jersey.

The title of that report was my number one question to my parents. I was always curious and asked “why” about everything. My mother would sometimes just respond, “BECAUSE!” So I named the report after my constant question. I suppose I could have been a real pain back then. If it was something I was interested in, I dove in over my head. If it was a boring subject, I really did not pay attention.

I began to use it myself in 1976. I observed it beginning in 1966. I had watched the boom-bust move from market to market — stocks, collectibles, real estate, and interest rates. Each time I had thought the bust was unique to that one market, I began to see that there was no exception. Everything rallied with an emotional peak, and then the crash would come when you could not sell what everyone wanted just months before.

I had gotten divorced but kept my kids. I was living at 16 Palmetto Ave, Marlton, New Jersey, but traveling 1 hour to Princeton every day. So I put my house up for sale, and for months nobody even came to look. Then a couple came. I think he owned some stores like a 7/11, but I don’t recall. He walked in and said he would buy it, but I had to be out in 30 days because his wife was very pregnant. I said, “No problem.” I took my two kids, and we moved into a hotel in Princeton as I began my search for a new home.

I then bought a house at 17 Abey Drive in Pennington, New Jersey, where I raised my kids. It was pointed out to me that 16 was 2x 8 and 17.2 is 2 x 8.6. So I suppose I have always lived with addressed that were linked to pi.

I do not know if it was destiny. I understand many people believe we are here for some purpose. Even in Asia, the idea of reincarnation in Hinduism is perhaps as old as Hinduism itself. General Patton had told my father that he was reincarnated and sent back to win the war. He said he was a General many times in history and said he would describe how they fought battles even under Alexander the Great. I do not have any recollection of past lives, so I cannot answer that question of destiny. Perhaps it is true or just a coincidence. Who knows.

The post WHY Things Happen first appeared on Armstrong Economics.

The male college crisis is not just in enrollment, but completion