Who is Leading America? 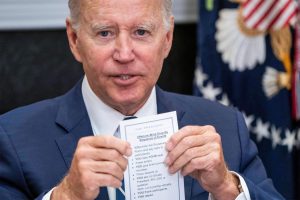 This picture circulating the internet is a clear indicator that President Joe Biden is NOT leading America. We already knew he was a puppet, but the simple commands on this notecard lead me to believe that he may be in the early stages of dementia.

In 2020, I was invited to Mar-a-Lago to watch former President Trump speak to a small audience. He walked on stage and said that although they would prefer he read from the script, he would speak candidly to the audience. He touched on hot-topic issues and was completely alert and open to answering questions that were not pre-screened. They would have physically removed Joe Biden from the stage if he attempted such a stunt.

I have never been asked to read from a script when meeting with clients, nor have I seen anyone come to the table or podium with such a detailed outline for basic human interaction. It is completely absurd. Throughout all my years, I have never seen such incompetence, and this latest example actually makes me pity the president.

The commands on this “Offshore Wind Drop-By Sequence of Events” are frightening. Joe Biden needs to be directed to complete simple tasks such as taking his seat, asking a question, and departing. YOU should not have raised this card in a room filled with reporters! This is why even the leftist media is questioning his mental health. The ship is sinking, and no one is behind the helm. If he cannot complete simple mundane tasks, he cannot rule the world’s leading economy. He probably shouldn’t even be left home alone. Anyone who still believes that Joe Biden is fit for the presidency is simply unwilling to admit they were wrong.

The post Who is Leading America? first appeared on Armstrong Economics.

Who is Leading America?

Should we Cheer for Putin to Lose?

How can democracies harness technology to promote inclusive economic growth and development?