Overcoming the barriers to technology adoption on African farms 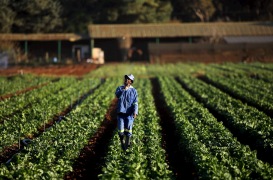 A farm worker gestures as he walks between rows of vegetables at a farm in Eikenhof, south of Johannesburg May 13, 2015. (REUTERS/Siphiwe Sibeko)

Sub-Saharan Africa’s agricultural sector is widely recognized to have vast, under-utilized potential. Land and labor productivity are low compared to other regions and have barely increased over the last 20 years. Low productivity has created widespread rural poverty and food insecurity, so the potential for productivity increases represents an opportunity to boost inclusive growth.

Scholars, development organizations, and some entrepreneurs have identified digital technologies associated with the Fourth Industrial Revolution—the broad shift toward greater machine autonomy, improved analytics, greater connectedness, and advanced robotics—as one potential path toward overcoming these productivity challenges. Anecdotal evidence from well publicized start-ups—such as Hello Tractor, a tractor-sharing platform started in Kenya, and Zenvus, a Nigerian soil mapping company—have fueled a narrative that digital agriculture represents the key to delivering productivity gains to African start-ups. Yet as a recent FAO report admitted, hard evidence that digital agriculture is delivering on this promise is difficult to come by, as long-standing challenges persist in preventing to unlock fully the potential of these technologies.

In a recent report, we use new data and trends in output and employment, review the main productivity issues that are preventing transformation in the African agricultural sector, and ask how Fourth Industrial Revolution (4IR) technologies might address them and unlock better job opportunities. The optimistic narratives around African farmers’ adoption of technology often overlook the more long-standing challenges they face that are preventing the adoption of much older productivity-increasing technology, such as fertilizers and conventionally produced hybrid seeds. For digital agriculture to be effective and transformational in Africa, a concerted effort to address Africa’s long-standing agricultural productivity challenges is needed.

What is the digital agriculture narrative about?

The technologies of the Fourth Industrial Revolution (4IR) offer significant productivity- and income-enhancing potential on the farm and post-harvest. Possible applications include:

These applications are currently in wide use in developed and emerging market countries in other regions, but aside from some technologies like mobile phones used to connect suppliers and traders, most African farmers are not using contemporary technologies like these. And where they have been used, evidence has now emerged that, although access to mobile phones has improved market performance in agriculture at the macro level, the impact at the micro-level is heterogeneous. At the micro level, mobile applications have not systematically improved farmgate prices or on-farm earnings for the average farmer, although they have in some cases reduced price dispersion, especially for perishable crops such as bananas, suggesting that some farmers, possibly in more remote areas, have benefited.

Why have 4IR technologies spread so slowly on African farms?

One reason for the slow pace of technology diffusion among the African agricultural sector is limited internet access. In rural areas, less than 30% of adults in rural areas report having access, mostly to mobile broadband at 2G and 3G speeds, which is not fast enough for many applications. Without access to information about technologies that might improve yields and without the internet speeds to run the relevant applications, technological developments aren’t reaching those who need them most.

Other perhaps more important obstacles to technology diffusion are agricultural policies and contexts that make technological adoption unappealing for farmers. Producers adopt new technologies when they solve a current, urgent production problem at an affordable cost. However, context-specific constraints lead many producers to conclude that the risks inherent in the new technology outweigh the benefits. These constraints include the cost of the technology, a lack of information on how to use the technology, poor access to markets, or expensive or lacking complementary inputs (such as energy, water, or transportation). According to recent surveys of the state of agricultural technology adoption in Africa, context-specific constraints have hindered the adoption of existing technology (such as fertilizer and hybrid seeds) and will probably limit the adoption of 4IR technology on the farm in the near future.

To be sure, the African agricultural productivity challenge is hard, and there are no easy solutions. Rural areas in Africa are less densely populated than in Asia, which contributes to the high cost of inputs and infrastructure expansion. Agro-ecological conditions show tremendous variation in Africa, increasing the need for local and context-specific agricultural research and development, which is one reason why the has not yet been a “Green Revolution” in Africa. Land tenure issues are tricky to resolve when so many rural households working on small plots of land depend on farm production for food security and income.

The past 20 years have brought important changes to African agriculture. Africa recorded the highest average annual production growth rate of all regions in the world—nearly 4%. Although much of this increase was based on land expansion, a number of African countries recorded positive total factor productivity growth (that is, more output per unit of inputs), including Cameroon, Ethiopia, Ghana, Mozambique, Senegal, and Sierra Leone. Innovation in the production of high value-added export crops, such as cut flowers in East Africa and pineapples in Ghana, contributed to productivity improvements, though innovation and productivity improvements in food crops have lagged. As a result, outside of South Africa, the labor and land productivity of African farmers remains well below levels found in other developing regions.

Meanwhile, where ICT infrastructure is available and service cost is affordable for rural households, research suggests that use of mobile phones and the internet have raised household incomes. However, this has occurred by raising incomes off the farm in small-scale nonfarm household enterprises, not by raising agricultural incomes.

What can be done?

Agriculture remains an important sector in African development strategies. Growth in agricultural production supports both sustained economic growth through structural change, as well as poverty reduction. Productivity advances are desperately needed, but will be challenging to achieve.

At the same time, expanding access to ICT services in rural areas should be a priority even if the benefits for farm incomes are elusive for now. Helping households to shift their working hours into more lucrative activities off the farm has widespread, long-term benefits. And if more intensive, context-specific, local agricultural research is able to achieve new breakthroughs, ICT platforms can help spread the message. Eventually, when other farm productivity constraints are reduced, and the cost of new technologies is reduced as well, the digital revolution could eventually benefit African farmers.

Louise Fox is a nonresident senior fellow in the Africa Growth Initiative (AGI), which is part of the Global Economy and Development Program at the Brookings Institution.

Landry Signé is executive director and professor at the Thunderbird School of Global Management, a senior fellow in the Global Economy and Development Program and the Africa Growth Initiative at the Brookings Institution, a distinguished fellow at Stanford University, and founding director of the Fourth Industrial Revolution Initiative.

The Reshuffling Report No. 7: The rise of the post-1970s generation at the 20th Party Congress