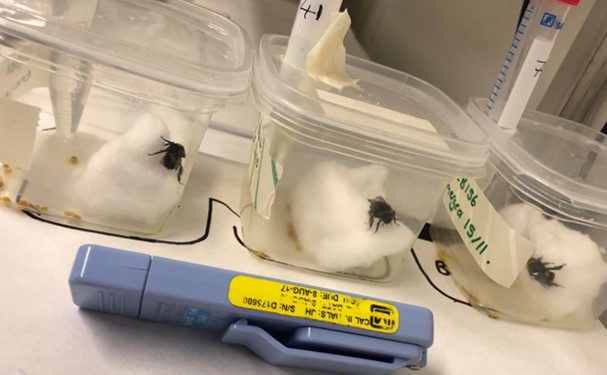 In this new post, Jessica Burrows—a fourth year PhD student based at the University of Stirling, Scotland—discusses her new paper ‘Ecologically relevant radiation exposure triggers elevated metabolic rate and nectar consumption in bumblebees’. Jessica’s PhD research is funded by the NERC IAPETUS doctoral training programme, and focuses on the effects of radiation levels found in the Chernobyl Exclusion Zone on invertebrates.

There has recently been renewed interest in understanding the effects of radiation on our environment with the development of new nuclear power stations. In addition to this, the issue of dealing with legacy radioactive waste often appears in headlines. Whilst the impacts of radiation on humans is well known, there is still substantial scientific debate surrounding the effects of lower doses of radiation on non-human biota. Moreover, debate about the effect(s) of relatively high doses, such as those currently stated as safe for bumblebees in our environment, continues to rage on.

The Chernobyl Exclusion Zone (CEZ) is a radiologically contaminated site that continues to capture the public’s interest due to it being the worst nuclear disaster in history. However, since the disaster in 1986, this landscape has supported growing populations of many ecologically important species. Even though radioactivity has dropped significantly over the past 30 years, the many species that reside in the CEZ are still exposed to varied radiation levels across this habitat. The ecological impacts from these varied levels of radiation are debated in the literature, as field studies are often inconsistent as to whether they find any effects on organisms. In addition, it is hard for field studies to determine the total dose an organism has received over its lifetime, which further creates problems for reaching firm conclusions.

Three bumblebees in their ‘Bumblebee hotels’ being exposed to the same dose rate of radiation. Each hotel had a feeder and nesting material (credit: Jessica Burrows)

Using a controlled laboratory setting, our research set out to re-create the conditions found in the CEZ in order to understand the impacts of levels of radiation currently found in this environment on bumblebees. We focussed on bumblebee feeding and metabolism as a potential measure of the effects of radiation that could be generalisable across other species.   It is important to remember that bumblebees forage in different locations over their lives; therefore, in a landscape with varied doses of radiation, they will be exposed to different dose rates. In lieu of this, not only did we investigate measures during exposure but we also looked at what could happen if bumblebees spent a few days foraging in an area with relatively high radiation levels and asked the question: Will this have knock-on consequences even if they don’t forage there all the time? We found that when bumblebees are exposed to ecologically relevant dose rates, both the volume of food they consume and their metabolism increase significantly. However, when a bumblebee is no longer exposed, the amount it eats still remains elevated, whilst metabolism returns to normal.  Whilst some previous studies have reported negative impacts of radiation on species found in the CEZ, the mechanisms that potentially drive these effects have remained unclear. Radiation-induced changes to organism energy budgets could have wide ranging consequences; therefore, our study may shed light on the drivers of radiation effects both for individuals and for wider ecosystems.

We think these findings are important as they suggest bumblebees exposed to radiation will need to spend longer foraging for food, which subsequently may increase risks of being exposed to parasites or attacked by predators. An increase in feeding and metabolism could also lead to a bumblebee needing to invest more resources into themselves, which would then impact the amount of resources available for developing offspring. In the future we would like to investigate the potential effects of this at a colony level in order to understand if the cumulative effects of an increase in feeding and metabolism could impact pollination ecosystem services.

Bumblebees arranged within a beam of radiation in a controlled environment facility at the University of Stirling (credit: Jessica Burrows)

We hope our work has broader impacts in terms of bringing change to current radiological policy. This study found effects of radiation at levels that international environmental protection frameworks currently consider safe for bumblebees in our environment. We hope that this paper adds to the evidence that the threshold should be lowered. The CEZ today is filled with a wide range of ecologically important species, therefore, it is incredibly important that we continue to improve our understanding of the effects of radiation on organismal biology and ecology.

A bumblebee acclimatising in its metabolic rate chamber. This chamber has two bungs in each end in order to allow air to flow through to machinery. The bungs were adapted so plenty of air could reach the bumblebee but stopped any escape artists! (credit: Jessica Burrows)

Of course, setting up two large experiments with hundreds of bumblebees is never going to be an easy process. One of the greatest challenges of this experiment was simply finding enough hours in the day to do all the measurements that we wanted to. The metabolic rate data was time consuming to collect; therefore, in order to get as many measurements as possible, we created a new metabolic rate measurement apparatus. This was a set of 5 chambers that each contained one bumblebee, in which we then switched airflow between the chambers using a manifold. This allowed us to get sustained measures over five minutes from each bumblebee. This set up gave us reliable measurements and kept bumblebee (and researcher!) stress to a minimum. This was all thanks to some fantastic support and a bit of innovation—a large experiment such as this is often a team sport. A great personal success of this experiment was that I did not get stung once, despite the large number of bumblebees under my care!

As a follow up to this experiment, we would really like to understand if any of the effects of radiation that we have recorded could be seen in other insect species. We are currently investigating how ecologically relevant doses of radiation impact reproduction in common fruit flies (Drosophila melanogaster), which are found extensively across the CEZ.

I completed this study as part of my PhD project, funded by a NERC IAPETUS PhD Studentship, with Dr. Matthew Tinsley at the University of Stirling, Scotland. I am currently working on finishing my PhD thesis, which is dedicated to exploring the effects of radiation currently found in the Chernobyl Exclusion Zone. As a result of the global pandemic, I will sadly never get to step foot in the place I have spent four years studying, which is a huge shame! However, I feel incredibly lucky to have access to facilities that have allowed me to recreate the conditions found there and to have excellent mentorship that has spurred me on through having to re-plan large portions of my thesis.

My passion for ecology and preserving our natural world came a lot later in my career than most. When I moved to University, I was fortunate to meet some incredible lecturers whose passion for our natural world was infectious. For my Master’s project, I completed a research project studying the declining Pearl-bordered Fritillary butterfly species in order to help preserve its breeding habitat. My supervisor told me that it would be the best summer I would ever have, and he was not wrong! After those many weeks spent with this beautiful butterfly, I knew I was hooked for life. I am currently undertaking a work placement with Butterfly Conservation in Scotland and witnessing research suggestions being implemented in real time has been inspiring. If I was to have one piece of advice this early in my career, it would be to spend some time volunteering—it is a great way to step away from the lab bench and immerse yourself in nature.

When not caring for hundreds of bumblebees in the laboratory, I can be found attempting to climb Scottish hills, running around beautiful places with a butterfly net, and greeting every single dog I meet along the way.

I would Never Invest in Disney After LightYear

The Dollar Crisis is Far Greater than Anyone Imagines

Biden’s first-year judicial appointments—prospects for 2022 and beyond