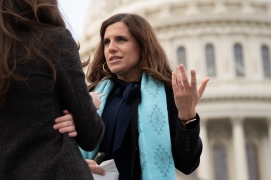 In the hearing room on Capitol Hill this week, a parade of Trump advisors testified that they tried to tell the President that he had lost the 2020 election. It’s possible that Trump knew he had lost but decided to pursue another, more cynical route to power by persisting in what’s come to be known as the “Big Lie.” Or it’s possible that Trump’s narcissism was so powerful that he simply couldn’t believe the experts and pursued the Big Lie out of a delusional fantasy. Sorting this out will keep historians and psychiatrists busy for years to come. In the meantime, however, the Big Lie has become a prominent feature of some Republican primary races around the country and one more way of measuring Donald Trump’s strength within the Republican Party.

The importance of the Big Lie was on display in the June 14 Republican primary in South Carolina. It featured two House races in which Republican candidates embraced Trump’s delusion against two incumbent Republicans who refused to go along. In South Carolina’s 1st district, incumbent Nancy Mace, was running for a second term. In 2020, she flipped a Democratic seat, campaigning as a solid supporter of Trump and ran with Trump’s endorsement. But, appalled by the January 6 rioters, in one of her first acts in Congress she refused to object to the certification of electors, and she called on Trump to get off Twitter. Her opposition to the Big Lie earned her Trump’s enmity and a primary opponent, Katie Arrington, who had Trump’s support. Because the two candidates share many of the same positions on issues, the race largely revolved around Mace’s betrayal of Trump. In South Carolina’s 7th congressional district, incumbent Tom Rice, also broke with Trump over the January 6 riots—going even farther than Mace did by voting to impeach Trump. That got him a primary challenger, state representative Russell Fry, who has been running with Trump’s endorsement. Unlike Mace, Rice has not tried to soften his opposition to the Big Lie. On primary night, Mace won her race and Rice lost his.

The final columns in Table 1 show the percentage of candidates in each category who actually won their races. Surprisingly, the candidates who spoke out against the insurrection did better than those who supported it, but the numbers are small, there are still candidates in runoffs and there are still races to be decided.

We also looked for statements showing how candidates felt about the legitimacy of the 2020 election. More candidates had opinions on this than they did on January 6 but still not very many. As Table 2 indicates, 65 candidates or 8.56% of all candidates to date campaigned on something to the effect of, “Biden’s win was a myth, and Trump would have won without voter fraud.” Notably more candidates believed something like, “the election should have been investigated further, but I don’t believe Biden is illegitimate;” 113 candidates or 14.89% of all candidates to date said something like that in their campaign materials or appearances. As one would imagine, practically no Republican candidates went so far as to state that Biden won the election fairly. But, perhaps most importantly, 74.7% or 567 candidates made no mention of the legitimacy of the 2020 election at all.

Candidates who took the more moderate position, that the election should have been investigated further, did better than candidates who bought into the Big Lie. Only 14 Republican candidates believed Biden was the clear winner and they did well too.

Finally, we looked for general statements about election integrity with a focus on the future not the past. In Table 3, 42.6% or 323 candidates made statements in favor of election reforms that would make it harder to cheat, and only 17 candidates or 2.24% of the total made statements indicating that they’d like to make it easier for people to vote. Clearly the former was a safe haven for most candidates: expressing concern about election integrity without having to support the violence around January 6 or the Big Lie. But even here the majority of Republican candidates—419 candidates or 55.2% of the total candidates to date—stayed away from the issue.

On this issue, overall election integrity, Republican candidates who were in favor of tightening voting rules in the name of improving election integrity did fairly well. No wonder so many Republican candidates adopted this position. It was a forward-looking position that allowed them to express some doubt about the past without getting mired in approving or disapproving the violence of January 6 and without getting sucked into conspiracy theories about the 2020 election.

What are we to make of these findings?

First, January 6 and the 2020 elections do not loom as large in the minds of Republican candidates in 2022 as they do in the mind of Donald Trump.

Second, to the despair of many Republicans, Trump’s strategy for the 2022 midterms has been all about him and the 2020 election. It is a backwards looking strategy that has resulted in mixed verdicts on Trump all across the country—as it did in South Carolina on June 14. And third, most of his victories are in deep red states and districts. Trump is not changing hearts and minds as much as he is activating a cadre of 2020 voters who are among his most passionate and committed.