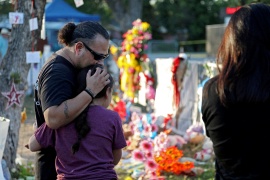 This has been a horrific month in America. While Ukrainians fight for their nation and their lives amid an aggressive Russian invasion, Americans are dealing with the slaughter of their schoolchildren and peaceful grocery shoppers (among others) by their own citizens. And yet at least half of our polity is unmoved and unwilling to support restrictive measures against gun ownership that have proven effective at stopping mass murders in at least 10 other wealthy countries, including the U.K., New Zealand, Scotland, and Australia.

Sadly, we have seen this movie before. The tragedy is that it is real, and the latest victims are 19 fourth graders and their two teachers killed by a troubled 18-year-old with an AR-15 in Uvalde, Texas, and elderly African American community members attacked by a white supremacist, also 18 years old, in Buffalo, New York. These were the 198th and 214th mass shootings in 2022 in the U.S., which is beyond conception of inhabitants in most other countries.

Any number of public conversations (that may or may not lead to progress in solving the problem) focus on the lack of gun control and regulation, the propensity of young men to turn to violence in troubled times, racism, the effectiveness of police responses, and much more. In this short piece, we tell a much simpler story, based on Twitter data, in the hopes that it can contribute in a positive way to potential progress. It is based on emotions and reactions to gun violence according to political affiliation. While there are some major differences, we also point out the similarities that may serve as a bridge toward greater consensus at a time when it seems there is none.

There are some deep ironies noted by our “tweeters”: The police are allocated 40 percent of the municipal budget in Uvalde, yet their response to the shooting was inadequate at best; comparatively, Robb Elementary School is woefully underfunded with a majority of its students being economically disadvantaged. Governor Abbott prescribes the need for better mental health care in the aftermath of the shooting while slashing the budget of the very same mental health programs in Texas. Politicians and pundits blame everything from doors to the Azov Battalion in Ukraine and avoid conversation about the role of guns in the violence while guns become the leading cause of death for children in the U.S.

Our analysis is based on data collected in the aftermath of the recent Buffalo and Uvalde shootings. Twitter data has the advantage that it provides real-time data on reactions to events such as elections, natural disasters, mass shootings, and more, on a large scale. It has a disadvantage that the socioeconomic and demographic traits of the respondents are missing. We can roughly gauge the location of the respondents by their Twitter “biographies,” and we also know that, on average, Twitter users are younger and slightly more educated than the average for the general population. Another detail that is relevant to our study, and is usually self-reported in biographies, is political leaning.

The current discourse is overwhelmed with cynicism and pain that seems to unearth every associated injustice felt by right- and left-leaning users. Without compromise from both sides, no consensus will be possible.

Using this information, we created two broad categories of respondents: right-leaning, pro-gun rights and left-leaning, pro-gun control. Some of our respondents did not fit into these categories, so we dropped them for the purposes of this analysis. We ended up with 98,043 tweets from the right-leaning group and 301,858 from the left-leaning group for Buffalo, and 206,624 and 754,980 respectively for Uvalde. The tweets for Buffalo were collected from May 7-16, and for Uvalde from May 17-31.

Our findings are not surprising in that there are some very different reactions from the two groups, with the right-leaning group more likely to focus on “whataboutism,” the hypocrisy of not mentioning deadly crimes committed by non-white men (such as the Waukesha drive-through at a Christmas parade), and the locations Biden did and did not visit after such crimes. The left-leaning group was more likely to focus on the victims, guns, white supremacism, and the complacent nature of the right-wing media, such as Fox News. These different reactions are visually evident in the hashtag word clouds in Figure 1.

We are also able to distill the emotional response of users using the “yellow face” emojis and sort them into six categories: anger, disgust, fearful, happy, sadness, surprise, and neutral/other. Compared to the reactions of the overall Twitter collection, both right- and left-leaning groups showed more negative emotional responses like anger and sadness, for both shootings. As seen in Figure 2, expressed emotions are different across the two groups, with most right-leaning respondents reporting fear, followed by anger, while anger was the predominant emotion for left-leaning tweeters, followed by a much smaller percentage that reported fear. Sadness was also a prominent emotion, particularly in response to the Uvalde shooting.

There are also differences in what these emotions correspond to. For example, the expressed fears by the pro-gun, right-leaning group in the wake of the Buffalo shooting are emojis used in tweets pushing various conspiracy theories about the Azov Battalion or even that the shooting was a distraction from Hunter Biden’s laptop. The anger expressed by these responders concerned the double standard of media reporting while the anger in the left-leaning group corresponded with the shooter self-identifying as an anti-Semite and white supremacist. These differences slightly converge in response to the Uvalde shooting, where right-leaning responders also shared their anger at police inaction and fear for children going to school, but the cynicism persists with many claiming this is part of a larger Democratic agenda. Particularly for the Uvalde shooting, the anger expressed by left-leaning responders was also about the hypocrisy of pro-life activists who are unable to address gun-related deaths in this country.

Unlike in earlier mass shootings we have analyzed, there was almost no mention of religion or God in these two series, suggesting that any hope in that domain in terms of resolving our gun violence problem, is long gone. Instead, there is a consistency across both groups that this is an issue that needs to be addressed. While individuals who are right- leaning shy away from gun control and left-leaning respondents seem to be angrier, their increasing fear of mass shootings—including their inability to send their children to school in safe places—may change the nature of the conversation.

The current discourse is overwhelmed with cynicism and pain that seems to unearth every associated injustice felt by right- and left-leaning users. Without compromise from both sides, no consensus will be possible. Any sort of reform of gun regulation and access will fall short of what Democrats would like to see, while any such reform is unlikely to be popular with Republicans. The question then, is whether this time is different from previous ones and where the two sides are willing to budge. While the main obstacle is the Republicans’ unequivocal refusal to discuss gun control, that refusal will not change unless Democrats show a willingness to compromise on the extent of restrictions and to accept that there are millions of people in the U.S. that are horrified by the violence but are not willing to give up their right to own guns. While many of us cannot understand such a mindset, the only way to achieve some progress is to find measures that are acceptable to a large-enough coalition of Republicans.

We have passed a ban on assault weapons before (such as the 1994 ban under President Clinton)  and gun violence fell significantly without encroaching on the “sacred” individual right to bear arms in this country. A similar measure, or least one that seeks to age restrict access to such weapons, would be a small if insufficient step in the right direction. While most people, including these authors, do not see why any private citizens needs to own assault weapons (nor did they exist when the Second Amendment was added to the Constitution), such a measure would be a small step toward compromise that may break the ice.

At this point, it is up to all of us to do something about the problem, and we desperately need both sides to participate in the effort. Our very brief analysis suggests that the emotional reactions to these horrific incidences of violence are not that far apart from each other, although the words that they are hidden in remain so. We hope this can provide an opening toward a solution where one did not seem to exist before.