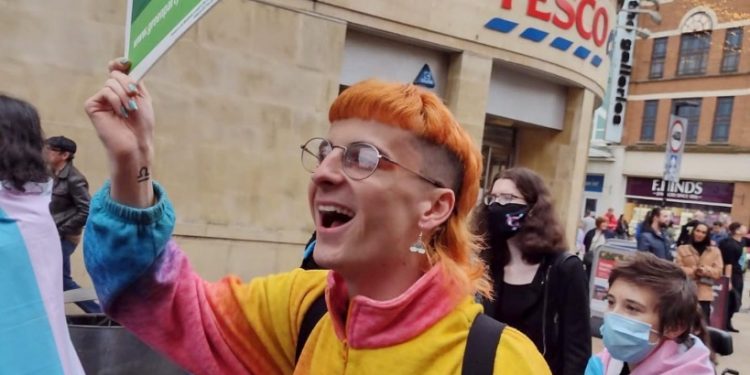 To celebrate UK Pride Month, the British Ecological Society journals have re-launched ‘Rainbow Research’ – a blog series which aims to promote the visibility of STEM researchers from the LGBTQ+ community by connecting each post to a theme represented by one of the colours shown in the Progress Pride flag.

In this blogpost, Billy Wassell, an Ecology and Environmental Science undergraduate at the Univeristy of Gloucestersire, UK, discusses their research into workplace discrimination of LGBTQ+ ecologists in the United Kingdom.

With recent figures showing a steady increase of the LGBTQ+ population in the UK, it is sensible to assume that the number of this demographic in the UK workforce is increasing too. However, this may not be the case. Heteronormativity and heterosexism still dominate many UK workplaces which contributes to hostile working environments for queer employees. Discriminatory workplace environments can lead to adverse physical and mental effects for LGBTQ+ employees, ultimately leading to employment precarity and, eventually, unemployment. The STEM sector in the UK still harbours heteronormativity and heterosexism which pushes LGBTQ+ employees into leaving their roles and results in the failure to retain many LGBTQ+ students post-graduation.

As a young, queer, and nonbinary ecology undergraduate, having representation in a field I wanted to pursue a career in was an important motivation for determining that the field was a place for people like me. But representation was hard to come by. In an interview with LGBTQ+ STEM, an ecologist with fifteen years of experience in the sector said, “there was still very little support for anyone from the LGBT community [in the ecology sector]”. In the same interview, he commented that working in countries with homophobic cultures has been “difficult and potentially dangerous”. I had no doubt that this person wasn’t lying but I was bewildered as to why there was no previous quantitative research on the experiences of LGBTQ+ ecologists, like there were for other STEM fields. This bewilderment evolved into motivation to fill that gap. I did this through my undergraduate dissertation where I documented the workplace experiences of queer ecologists.

Entitled ‘I’m (not) Coming Out!: An investigation into the workplace discrimination of LGBTQ+ ecologists and their relationship with overseas fieldwork’, the primary data I collected was, to my knowledge, the first of its kind that focussed on the work experiences of LGBTQ+ ecologists in the UK. It also explored the relationship they have with participating in fieldwork abroad. By distributing a questionnaire to LGBTQ+ STEM organisations, I was able to collate the workplace experiences of fifty-five ecologists who are currently, or who have previously been, employed in the ecology sector. The results were illuminating.

Billy holding up a placard while participating at the Trans Pride South West march in 2021 (credit: Patrick McAllister)

Only 27% of all respondents were fully out to their colleagues in the ecology sector, with those fully out to management being 31%. Trans* were less likely to be open about their gender and sexual identities than cis gender respondents. Bisexual ecologists were significantly less likely to be fully open about their sexual identity than any other sexual identity demographic. Furthermore, 40% of all respondents had, at some point, overheard derogatory comments regarding gender/sexual identities within the workspace, and almost 10% had been victim to derogatory comments personally directed at them. Gay men were twice as likely to have had derogatory comments directed at them than any other demographic. More than one in four respondents had witnessed exclusionary behaviour towards other LGBTQ+ colleagues, with 15% having personally been on the receiving end of exclusionary behaviour because of their queer identities. In relation to working abroad, a third of respondents had refused overseas fieldwork out of fear and concern over their safety as an LGBTQ+ individual. That number rose to almost 50% for Trans* respondents.

The study provides quantitative insight into the workplace environment of LGBTQ+ ecologists. While similar research has been gathered regarding general workplaces in the UK, as well as the STEM sector, this is the first time an ecology-specific study has been undertaken. We find that there are a range of experiences within the ecology sector, but the results above show strong evidence that the average queer experience roughly follows that of LGBTQ+ experiences in the general UK workplace and STEM workplaces in the UK. In some cases, the queer ecologist experience is more inclusive than in other UK workplaces. This is of course positive news, but it should not mask the fact that the general and STEM workplace for LGBTQ+ employees is in desperate need of becoming more inclusive.

Greater lengths need to be pursued to protect LGBTQ+ ecologists. In the majority of employers, particularly universities, LGBT-specific safeguarding policies for working abroad are virtually non-existent. Any advice given to queer academics about overseas fieldwork is usually highly generalised and ineffective in accommodating LGBTQ+ issues. The ecology sector is also not doing enough to challenge the heterosexist and heteronormative attitudes that are dominant throughout the rest of the STEM sector. Employers have a responsibility to educate their employees on LGBTQ+ identities as an avenue of mediating any discriminatory behaviour.

The Blue in the Progress Pride Flag represents Harmony. By illuminating these experiences, it is the hope that this research will provide valuable evidence for policymakers to create harmonious working environments for LGBTQ+ ecologists. It is the hope that employers use the evidence to implement inclusive practices within their working environment. It is important to acknowledge, however, that this paper is only the start of the process. Due to the paper not uncovering why queer ecologists experience their workplaces the way they do, future research needs to investigate the determining factors of workplace experiences. This paper provides a surface-level understanding of workplace experiences, but a focus on the personal, rather than grouping individuals together, is the next research step. Having this documentation of experiences is the critical first step in overcoming barriers that prevent LGBTQ+ ecologists from thriving in the sector. Nurturing a harmonious workplace environment is integral for LGBTQ+ employee satisfaction and productivity. This research starts that journey towards harmony.

Enjoyed the blogpost? Stay up to date with Billy on Twitter here!

A World Bereft of Statesmanship

How to rein in partisan Supreme Court justices

Manufacturing Output Falls for a Second Consecutive Month in June