5 priorities for funders to support in refugee education 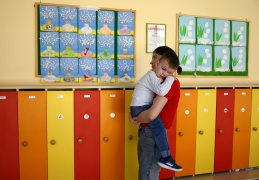 A recent meeting of an international group of education donors, hosted by the Center for Universal Education at the Brookings Institution, confirmed that refugee education is top of mind for international aid agencies and foundations alike. This is perhaps not surprising given how the war on Ukraine has gripped the West’s attention and generated very generous support in the form of government aid packages, welcoming policies by nearby countries, and an unprecedented $1.4 billion in donations from the private sector as of early June, according to United Nations Office for the Coordination of Humanitarian Affairs. But as organizations serving refugees know all too well, surges in financial support have a history of being short-lived and—even worse—amassing insufficient support.

The refugee education crisis, however, has reached a new urgent stage that warrants consistent attention and more innovative and durable solutions. According to the United Nations High Commissioner for Refugees , the number of forcibly displaced people has reached 100 million for the first time, up from 90 million at the end of last year. Ukrainian refugees are part of these statistics, but so too are the millions from other parts of the world, with the highest numbers of refugees originating from Syria, Venezuela, Afghanistan, South Sudan and Myanmar. The sharp increase is dwarfed by estimates projecting the number of displaced people to potentially increase to 1 billion by 2050. This increase in refugees could lead to the international community having to provide support to hundreds of millions of out-of-school children, which would be upwards of three to four times the current amount.

It is against this stark background that donors must rethink their support to refugee education. In our discussion, meeting participants underscored five immediate priorities for donors:

Refugee education donors must center the voices of refugees in designing policy and programming. Too often, refugees are excluded from leading or even giving input into programs that are intended for them, thus resulting in solutions that do not respond to their needs or create unintended barriers. As one Afghan education advocate explained in the meeting, involving refugees, including refugee student networks, in designing education responses would demonstrate that refugees are “not just passive beneficiaries of agendas but active partners” who are “determined to take their fate in their own hands.”

Donors discussed the crisis in Ukraine and how it could help shape refugee education efforts moving forward and open opportunities to advance global policy. For instance, welcoming Ukrainian children into schools across Europe quickly and making it possible for Ukrainian teachers to work are two examples of policies and rapid action that should be consistently applied in all host countries and for all refugee children, regardless of their country of origin, religion, or gender. Underscoring the critical importance of supporting Ukrainian children’s education, the meeting participants also emphasized the need to ensure ongoing attention to refugee populations that are at risk of receiving less support, including Afghan, Rohingya, and Syrian children.

3) Funding needs to be more efficient and innovative.

While greater funding is essential to ramp up access to refugee education, current and new resources must be more efficient and innovative. Greater consideration should be given to how the current education global infrastructure invests in refugee education and the coordination between donors and donor funding mechanisms. At the same time, donors recognize the potential for more innovation in both attracting resources to the sector and exploring more innovative solutions through new partnerships with non-traditional actors, including private philanthropy.

Funding to refugee education continues to be largely limited to primary education, leaving large gaps in access to every other level of education. Only a tiny fraction (0.38 percent in 2017) of overseas development assistance for education in countries affected by crisis is allocated to early childhood education—a level of education widely recognized to have the greatest return on investment for funders and—even more importantly—a high impact on the early development and psychosocial needs of young refugee children. At the other end of the education spectrum, only 5 percent of refugees have access to higher education, without which access to high-skilled jobs and an opportunity to resettle in a third country is nearly impossible.

5) Invest in the resilience of education systems.

Recognizing that crises can be difficult to anticipate, governments and donors should also invest in the resilience of education systems. As clearly demonstrated during the school closures caused by the COVID-19 pandemic, stronger education systems have been able to withstand the impact of the pandemic and support their students and teachers much more effectively. The investments made by countries in digital education during the pandemic will also make education systems more resilient to future crises. For example, the Ukraine Ministry of Education has continued to provide education to its displaced students due to having components of digital education systems in place prior to the current crisis. At the same time, countries likely to host refugees should also consider how they could strengthen their education systems to successfully absorb refugee students. A strong benchmark of the resilience of education systems is teachers’ readiness and the amount of support they can provide to inclusive education. Another benchmark is the degree to which schools are connected to their communities and other government services, especially health and refugee services. Canada and Colombia, two very different education systems, offer interesting case studies for inclusion.

Power politics: Trump and the assault on American democracy

How U.S. policymakers can enable breakthroughs in quantum science