In Bernanke We Trust? 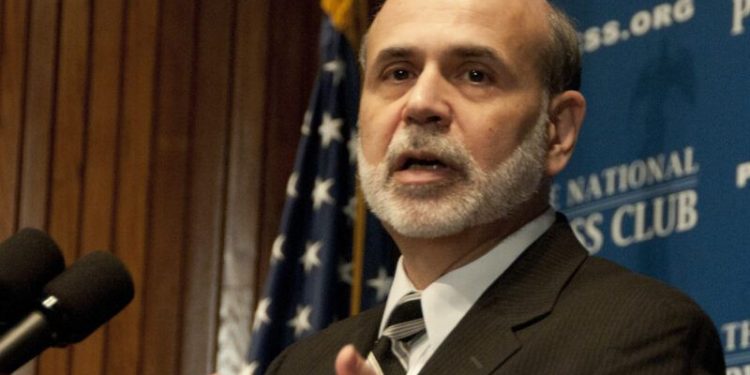 In our present inflationary times, the world’s central bankers are under their highest degree of scrutiny since Alan Greenspan found himself facing a Congressional committee in 2008 demanding to know why he hadn’t seen the Financial Crisis coming. To say that central bankers—once considered the adults in a room of adolescent politicians—presently have a substantial credibility problem is an understatement.

To be fair to central bankers, part of the difficulty is that their reputation for competence forged in the 1980s and 1990s meant that governments found it convenient to let central banks take the lead when Western economies ran into difficulties in the late-2000s. Unfortunately, this has resulted in monetary stability being subordinated time and again to the perceived necessity to react immediately to crises. Now, however, the bill for such policies has come due in the form of the worst inflationary outbreak since the early-1980s. Even that most conventional of economic and political commentators, The Economist, has affirmed that the Federal Reserve failed to fulfill its primary task.

There is more to this, however, than the dysfunctionalities engendered by central banks using monetary policy to try and address non-monetary problems. When central banking’s role is understood in neo-Keynesian terms—i.e., from a macroeconomic standpoint that emphasizes top-down demand-side management of the economy—it’s easy to understand why central bankers might gradually succumb to a Masters-of-the-Universe mindset.

That contemporary central banking operates within this conceptual framework is acknowledged by former Fed Chair Ben S. Bernanke in his new book, 21st Century Monetary Policy: The Federal Reserve from the Great Inflation to COVID-19. “So-called Keynesian economics,” he says, “remains the central paradigm at the Fed and other central banks.” One assumption of this model is that a small group of people, equipped with all the forecasting and management tools developed in the Keynesian revolution’s wake, can and should use monetary policy to smooth the business cycle’s ups and downs. But what if this assumption leads central bankers to overestimate what they can know and therefore do?

That question isn’t addressed in the book. This is a shame because the great strength of Bernanke’s text is that it is written by someone deeply versed in economic history and monetary theory who was also the world’s most important central banker between 2006 and 2014. That rare combination of scholar, theoretician, and practitioner allows Bernanke to provide insight into how monetary policy is shaped not only by the demands of the moment but also by ideas.

Today’s gold standard (forgive the pun) for the history of the Fed remains Allan H. Meltzer’s three-volume History of the Federal Reserve. The final volume ends with Meltzer remarking that while “The Volcker and Greenspan eras restored independence . . . Chairman Bernanke has acted frequently as a financing arm of the Treasury.”

That’s not how Bernanke sees it. His account of the Fed’s post-1970s journey begins with Richard Nixon’s appointment of Arthur F. Burns as Fed Chair in 1969. Much of Bernanke’s subsequent tale is presented from the standpoint of successive Fed Chairs. He illustrates how their strengths and weaknesses shaped their tenure, and the manner in which intellectual commitment to particular points of monetary theory impacted their leadership. But politics also emerges as very much part of the picture. Bernanke confirms, for instance, the assessment of Meltzer and the economic historian Amity Shlaes that Burns proved very susceptible to political pressures from presidents. By contrast, Paul A. Volcker was far more resistant. “Consistency and persistence,” Bernanke writes, “became Volcker’s hallmarks.” Character, it turns out, matters for central bankers.

So too do the precise tasks with which central banks are charged. Like many others, Bernanke believes that a bridge was crossed in 1977 when Congress amended the Federal Reserve Act to formalize what we now call the Fed’s dual mandate of stable prices and maximum employment. This placated, Bernanke notes, conservatives who prioritized anti-inflationary goals but also progressives anxious to see monetary policy used to stimulate employment. Yet, Bernanke notes, “the 1977 law did not say specifically how the two goals should be weighed in policy decisions.” It’s unclear, to my mind, how any legislation could be feasibly designed to prescribe how such a weighing could occur. The effect, however, has been to allow the Fed to emphasize whichever part of the mandate is most likely to legitimize its decisions.

For example, when Volcker jacked up interest rates from 1979 onwards to bring down inflation, he justified the Fed’s decision by appealing to the price stability part of its mandate. He was consequently accused by legislators of ignoring the maximum employment part. Volcker’s response was to insist that employment issues could not be properly tackled until inflation had been bought under control. As it happens, I think Volcker was dead-right. But his critics had a point when they said that Volcker was, for all intents and purposes, sidelining the other half of the Fed’s mandate.

Much of Bernanke’s account of the Fed’s post-Great Inflation history presents a succession of Fed Chairs trying to pay more than lip service to the Fed’s dual mandate. Nevertheless, it’s hard not to notice that the Fed’s long-term perspective, by Bernanke’s account, rarely made it past the peculiarities of the business cycle of the moment. The autonomy enjoyed by the Fed is supposed to insulate it from being excessively swayed by such considerations. But Bernanke’s history indicates that such swaying was more or less the norm. Even Greenspan’s prioritization of an inflation-first approach during the Great Moderation comes across as focused, at best, on the medium-term.

Perpetually reacting to the particularities of a given business cycle or economic downturn was bound to result in the Fed engaging in considerable experimentation. That was a hallmark of the Bernanke Fed’s wrestling with the 2008 Financial Crisis and subsequent Great Recession. This took the form of quantitative easing (QE—the central bank buying bonds and other financial assets to inject money into the economy) as well as efforts to improve management of policymakers’ and the public’s expectations of the probable direction of monetary policy.

“The bottom-line,” Bernanke states, “is that the bulk of the evidence . . . confirms the effectiveness of the alternative monetary policy tools adopted after 2008.” What’s more, Bernanke insists, these measures have appropriately “become permanent additions of the monetary policy toolkit.” Bernanke adds the caveat that they “are unlikely to be sufficient in all circumstances, particularly in very severe recessions or when the neutral interest rate is quite low.” He subsequently concludes that we should consider “what else might be done to make monetary policy, and economic stabilization policy more generally, more consistently effective.”

For Bernanke, QE is simply part of central banking’s new normal, and a potential stepping stone to adding more tools to the Fed’s arsenal. Yet Bernanke devotes much of Part Three of his book to defending QE’s effectiveness. This suggests that Bernanke knows that QE’s place in the monetary toolbox is far from achieving universal acceptance. He also responds to claims that QE benefits particular groups (borrowers over savers, investors over non-investors, etc.), risks creating asset bubbles, and distorts capital market signals. In some cases, Bernanke’s responses should give his critics pause for thought. Other replies are less convincing.

Bernanke maintains, for instance, that QE helped sustain America’s economy during the pandemic and get it back on its feet. These policies, he adds, “have not led to sustained excessive inflation.” Much, I’d interject, depends on what constitutes “sustained” and “excessive.” It’s safe to assume that the Powell Fed’s decision to start tapering the pace of its asset purchases in November 2021 before doubling that speed in December 2021 occurred because enough Federal Open Markets Committee (FOMC) members concluded that QE had contributed to the accelerating and damaging inflation rate which gradually engulfed the U.S. economy from April 2021 onwards.

Bernanke’s account ends with a reflection on a question that preoccupies most central bankers: how they should deal with the world of politics. In the 1980s, the bolstering of central bank independence against political interference became a priority for some policymakers. No central bank, however, is really above politics, whatever the law says. Certainly for Bernanke, this is simply part of the reality of modern American politics. To this, one could add that no government agency with delegated powers should be rendered invulnerable from any influence whatsoever from the three central branches of government.

There is, however, a difference between central banks seeking to navigate politics in order to achieve their specific goals, and central bankers choosing to pursue other objectives that reflect immediate political concerns. While Bernanke holds that “Solving our most difficult social problems lies well beyond both the Fed’s capacity and its remit,” he also states that “when the Fed has the opportunity, the means, and the legal authority to contribute constructively, consistent with the direction set by political leaders and the public, it should do so.”

I doubt that I am the only person with reservations about that claim. Institutions generally lose their focus when they take on issues that lie beyond their immediate competence. Central banks are no exception. Indeed, the more central bankers become involved in matters like climate change or economic inequality, the more they insert themselves into questions that Bernanke himself recognizes to be the responsibility of elected officials.

Such drift also incentivizes politicians and activists to pressure central banks to promote their pet schemes (progressives, for instance, have argued in favor of the Fed funding the Green New Deal). That opens the door to central banks being pushed to direct monetary policy to advance the specific interests and concerns of whatever group happens to exert more political leverage at any given time. The problem is that monetary policy seeks to influence macroeconomic variables such as interest rates. Central banks are thus spectacularly ill-equipped to advance directly the economic well-being of particular groups.

This brings us to what I believe has become crucial to the preservation of central bank independence: the need to narrow the mandate of central banks, including the Fed’s, to maintain monetary stability. Bernanke would, I imagine, disagree. But amending the Fed’s mandate to, at a minimum, prioritizing monetary stability over other goals—as well as central bankers’ willingness to say “No” to politicians, populists, and interest groups looking for quick fixes or favors—is surely the sine qua non to enhancing its independence today. In other words, meaningful autonomy for central banks depends on a constrained brief—not expanding it.

I’d like to think that this is something that the Fed might learn from our current inflationary woes. Alas, I fear that the ongoing desire to believe that state institutions can micro-manage economies made up of millions of people and businesses, as well as trillions of economic assets, will continue to thwart any such outcome. In the end, there’s a wannabe Master of the Universe lurking within all of us—including central bankers.

Weekly Initial Claims Rise to the Highest Level Since January

Weekly Initial Claims Rise to the Highest Level Since January