How do rapid shifts in body size influence population dynamics? 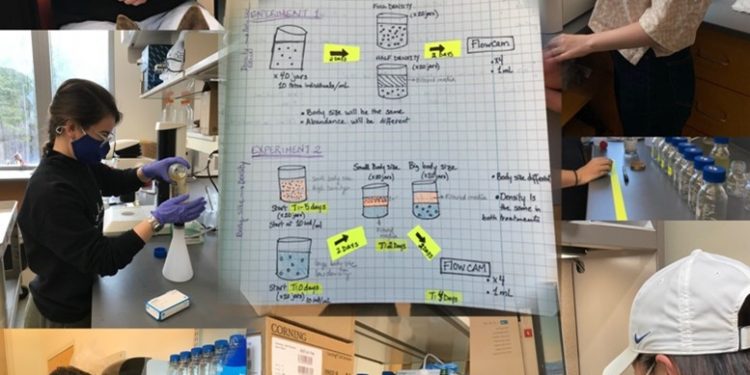 In this new post, Dr. Jean-Philippe Gibert, an Assistant Professor of Biology at Duke University, USA, discusses with us his recently accepted paper, “Feedbacks between size and density determine rapid eco-phenotypic dynamics.”

This paper was born out of serendipity and was a true team effort. Our goal was to quantify possible changes in protist traits over a short period of time as a population grew to carrying capacity. To do so, our co-author and lab manager, Andrea Yammine, collected a phenomenal dataset in which she imaged ~450k individual cells of the protist Tetrahymena pyriformis over the course of only two weeks.

We know that traits can and do change over time—sometimes quite rapidly. But our time-series showed a rate of change I had never seen before: a 70% reduction in body size in two weeks. These are microbes, mind you, well-known for doing crazy things; however, I wasn’t sure such a drastic—and rapid—reduction in size had been described before, or what ecological consequences this might have.

At first, I thought we could easily explain why body size changed in the way it did: as the population reached carrying capacity, increased competition for nutrients perhaps resulted in smaller individuals—i.e., density drives size. But I was wrong.

I used a type of time series analysis, developed by the Sugihara lab (UC-San Diego) in the early 80s which has been refined over time (notably in their 2012 Science paper), to quantify causal effects of size on density and vice versa. This showed that body size had a disproportionately large effect on density, but the opposite wasn’t true. So much for our hypothesis! Change in size was actually driving change in density, not the other way around. But was this actually expected? Could we predict this response from first principles? And when we failed to do the latter, could we use mathematics to model this behaviour? After addressing these questions, we submitted a data-driven result backed by modelling showing that not only were very rapid and plastic decreases in body size happening, they also seemed to be driving changes in density.

Enter reviewer 2. They weren’t convinced. I’m not talking about the proverbial reviewer 2 here, this was the actual “referee #2” who asked for an experimental manipulation of body size and density to assess whether our results held, or whether, instead, they were an artefact of the type of analysis used. At the time, this seemed like a problem. Doing what was being asked involved manipulating body size while keeping density constant, then manipulating density while keeping size constant. I was sceptical we could even pull that off in our system: it is one thing to manipulate size and density with organisms you can see, and another thing entirely to do these manipulations with microbes which are invisible to the naked eye.

I figured out how to manipulate density while keeping size constant while driving to campus, the day after the reviews landed in my inbox. Probably because it was the easy one to figure out. But I couldn’t, for the love of all that was good, understand how to manipulate the protists’ size while keeping density constant. Luckily my lab is composed of people much smarter than I am. Enter my graduate student, Ze-Yi (aka “Z”) Han, a talented experimentalist: “Z, can you help me figure this one out?”, I asked. “Sure, but I need food first”, was her response.

So, I took Z to lunch and explained the problem. It wouldn’t be easy. Protists eat bacteria, so growing protists means growing the bacteria the protists eat. To do this we use liquid media, and so any manipulation would have to also control for minute changes in either nutrient or bacterial levels, or likely, both, while meaningfully altering entire size distributions AND keeping everything else constant. Despite the challenges, it took Z a grand total of 5 minutes to figure it out. She explained what we needed to do in between bites of her lunch and even made a little napkin drawing (current Figure 1c of the paper). I smiled, nodded, and did my best to follow, but I was confident she had solved the problem. And she had.

For months after that conversation, Andrea, with support from Ze-Yi, research assistant Samantha Votzke, and postdoc Dan Wieczynski (who also played a vital role in data analysis and paper crafting), endeavored to pull off the experiment. While the idea was simple, the experimental setup was everything but. Even the simplest procedures (e.g., filtering media to get rid of the larger protists while allowing the smaller bacteria and media to pass through) underwent countless troubleshooting sessions, and every time, something seemed to go wrong. We met more times than I care to admit just to discuss and troubleshoot this one experiment. Think, think, and rethink, with no success. And then, one day, once we had decided it either had to work, or there was no reason as to why it would not…

And she attached the time-lapse below. They had, indeed, done it, and I honestly couldn’t be prouder. All while I was teaching about mathematical modelling and food webs. Topic of the day (my favourite): local stability analysis. But I digress.

Time-lapse of the experiment seting-up with Ze-Yi, Andrea, and Sam (back, working the FlowCam). Double-click to watch (credit: Andrea Yammine)

The data couldn’t be crisper! It showed that the effect of size on density was indeed stronger than that of density on size, in line with our time series analysis and modelling. It did also reveal there was a larger effect of density on size than our first analysis suggested. Now Reviewer 2 was not only onboard but impressed. Onward!

In the end, we showed that body size shifts as rapidly over the course of two weeks as densities do (at least in the protist Tetrahymena pyriformis), which directly influences population dynamics. Our modelling suggests that this change is mostly plastic, not evolutionary. In uncovering the fact that rapid plastic change in body size influences population dynamics more than vice versa, we show the existence of a strongly asymmetric feedback between population growth and plastic change in body size, which we dub a rapid “eco-phenotypic feedback.”

Long time series where both densities and traits are collected are rare and hard—if not impossible—to obtain with most non-microbial organisms. This means that the uniqueness of our time series didn’t come from the rarity of eco-phenotypic feedbacks, but rather from the fact that they are probably underreported. They shouldn’t be ignored, though—we think that eco-phenotypic feedbacks are likely common and should have important ecological consequences, especially in microbial communities. We just have to find good ways to see them.

Gibert is a native of Montevideo, the southernmost capital city in the Americas and the capital of Uruguay, where he was born and raised. Gibert speaks Spanish and French natively (he was born into a French family), Portuguese, which he picked up during his time in São Paulo, Brazil, and English. He currently lives in Durham, North Carolina, with his spouse, his two dogs Fiona (seems like a princess but is an ogre) and Zoey (no, we don’t know what breed she is), as well as their gecko, Jim Morrison (the lizard king). Their other two geckos, Simon (14) and Garfunkel (12), passed quietly not that long ago and are now being recycled into nutrients by the some of the same microbes Gibert fell in love with years ago.

Enjoyed the blog? Read the research in full here.

The EU AI Act Will Have Global Impact, but a Limited Brussels Effect

What does the Tennessee pre-K study really tell us about public preschool programs?