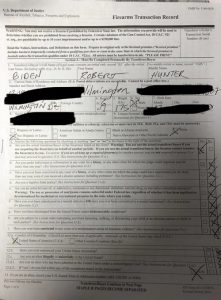 President Biden is worried about firearms falling into the hands of criminals, like his son, Hunter. Hunter Biden filled out BATFE Form 4473 in October 2018 and purchased a .38 caliber revolver from a shop in Delaware. Hunter claimed he was not on drugs at the time of purchase, as it is illegal to sell a firearm to anyone “who is an unlawful user of or addicted to any controlled substance.” Yet, in his memoir “Beautiful Things,” he admitted to smoking crack “every fifteen minutes” and that he even began to spend “a lot of time with thieves, addicts and con artists” who taught him how to cook crack cocaine.

Purchasing a gun illegally while under the influence is reckless, but the events that followed were worse. Hallie Biden, the widow to Beau Biden, feared for Hunter’s life as she thought he may harm himself. Hunter, who was legally married to his wife Kathleen at the time, was dating his fallen brother’s ex-wife. Morals aside, Hallie shortly found Hunter’s handgun in his truck and decided to dispose of it in a trash can across from Alexis I. du Pont High School.

One could only imagine the tragedy that could have unfolded if a teenager had found that gun. Hunter demanded that Hallie retrieve his illegal weapon, but when she went back to the school zone, the gun was nowhere to be found. The Delaware State Police, the United States Secret Service, and the Federal Bureau of Investigation quietly became involved. Politico noted that the store clerk did not want to cooperate with Secret Service as he knew they would cover for Hunter. The gun was later returned by a man who retrieved it from the trash can, allegedly.

Joe Biden cannot control guns within his own family. He criticizes responsible gun ownership while allowing his troubled son to endanger the lives of others.