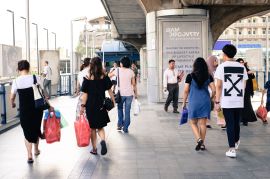 A shadow loomed over Davos as global leaders from business and politics convened in the Swiss alpine resort last week: The war in Ukraine, rising inflation, and the disruption of supply chains dominated the discussions. Last year’s optimism of pre-COVID and pre-war conferences has given way to stabilizing business and the international order in the short term. Indeed, short-term economic growth forecasts have been revised downwardly, but not as much as the popular sentiment would suggest. In the long term, faster growth is expected, especially in the emerging economies and Asia.

In October of 2021, World Data Lab (WDL) projected that the world would add 132 million new entrants to the consumer class (defined as everyone spending $12 per day in 2017 purchasing power parity (PPP)) in 2022. However, beyond the great extent of human suffering, the economic costs of the war in Ukraine are profound. The war has resulted in trade disruptions and rising energy prices, all of which add to the burden faced by the global consumer. Previous WDL forecasts have been revised, resulting in a loss of 22 million new global entrants to the consumer class in 2022. The most significant damage to consumers comes directly from the war. Ukraine will lose at least 12 million consumers this year alone, while Russia another 5 million. China’s zero-COVID policy has resulted in the next most significant revision, with a loss of 3 million consumers since previous forecasts.

The war and its ensuing economic consequences have slowed down growth almost everywhere, with people poorer than projected in pre-war scenarios. But despite China’s slowing economy, this is largely not the case in Asia:  Medium-term growth on the continent has been revised upwardly since October, mostly due to a stronger than expected post-COVID recovery in the Association of Southeast Asian Nation economies and a base effect from new India data. Against commonly held wisdom, the global middle class in Asia has recovered strongly after the COVID shock in 2020. It continues to multiply and is already larger than before the pandemic. Most countries are wealthier than in 2021 due to a continued post-COVID rebound. We now expect Emerging Asia’s share of the global economy to expand more rapidly than we thought in October of 2021.

Asia’s post-COVID recovery is part of a tectonic shift that started at the turn of the century. We can define three distinct periods of the rise of the consumer class:

Asia has been the driver of middle-class growth since 2000, and this trend will continue throughout this decade. The continent is now home to the world’s largest consumer market, both in terms of people and spending (Figure 1).

Figure 1. The consumer class is shifting East: The next decade will be South Asia’s

Asia will face another watershed moment in 2024, when—according to projections by WDL—over half of Asians will be “middle class” (spending $12-120, 2017, in PPP per day) or “rich” (spending more than $120/day). For the first time in the history of the Asian continent, the consumer class will outnumber the vulnerable and poor (see Figure 2).

However, the profile of Asia’s consumer class is different from the Western consumer in two important ways:

In Factfullness, the late Hans Rosling wrote: “It is easy to be aware of all the bad things happening in the world. It’s harder to know about the good things: billions of improvements that are never reported. Don’t misunderstand me, I’m not talking about some trivial positive news to supposedly balance out the negative. I’m talking about fundamental improvements that are world-changing but are too slow, too fragmented or too small one-by-one to ever qualify as news. I’m talking about the secret, silent miracle of human progress.” Many of the recent developments have reinforced the rapid rise of the Asian middle class. Despite China’s COVID lockdowns, a bright horizon lies ahead for the East. The next decade will slowly but surely transition more people out of vulnerability and into the middle class. Consumer spending will increase alongside this transition, and eventually, over half of all money spent will be Asian. Inflation is a risk, especially if interest rates rise and economies slow. However, it is important to realize that some of these fundamental demographic and economic forces have been reshaping Asia’s consumer market and these long-term forces are still at play today. In these turbulent times, it is also important to look at the trendlines, not only headlines.

The CFA franc zone: Economic development and the post-COVID recovery

Enduring preeminence: The US dollar might slip, but it will continue to rule

Enduring preeminence: The US dollar might slip, but it will continue to rule