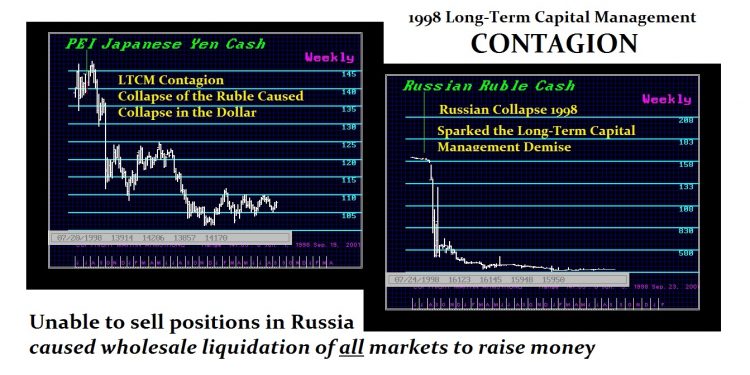 QUESTION: Marty, You were named hedge fund manager of the year in 1998 for producing the highest return during the Long Term Capital Management collapse over the Russian bond crisis. At the WEC in Orlando, you said in 2019 that we were facing a liquidity crisis that would be similar to that event. Well, the Federal Reserve has now warned of deteriorating liquidity conditions across key financial markets amid rising risks from the war in Ukraine, monetary tightening, and high inflation in their semi-annual report. It appears that the forecast of a liquidity crisis distinguishing this crisis from 2007 to 2009 is unfolding. Would you elaborate on this current crisis headed into 2023?

PS, a short interim virtual WEC may be warranted. Just mentioning. People take what you say, call it their own, and pretend you never existed.

ANSWER: What distinguished that ’98 Liquidity Crisis was that the “Club” of bankers and hedge fund guys were all on the same trade as they always did. The capital flows began to sift in 1994 as SE Asia peaked. The bear market that unfolded went largely unnoticed until the Asian Currency Crisis where the “club” then attacked the currency pegs. But the capital had begun to move back in anticipation of the coming Euro.

The 99.9% of fund managers lost their shirts on that capital shift because they were too busy bribing politicians and people in the IMF to look at the markets. They completely misjudged the world economy thinking like Marx and Keynes that they could control it. The shift in capital and attacking the SE Asian currencies led to the idea that all emerging markets were risky. With the Euro coming, the herd of little investors shifts their capital away from the funds heavily trading emerging markets. They were not “traders” but people who were engaged in trying to rig the game.

What they failed to understand was that the world economy is a financial sea of capital. When there is a high tide and capital is flowing in, they expect it will never end. The tide changes and you then move to low tide and the capital retreats outward. This was the first part of the liquidity crisis that would look at Russia as they did SE Asia emerging markets.

Consequently, when it is low tide, capital is retreating on a global level and that is when the liquidity crisis emerges. Thus, were the serious investors and pension funds behind to lose money in SE Asia, and they began unloading emerging markets elsewhere as well. Because all the hedge funds and bankers who try to rig the markets because they are not traders because they were all on the same trade of Russian debt when they tried to sell, there was NO BID. They began selling every position elsewhere which included the Japanese yen. It was a LIQUIDITY CRISIS so they needed to raise money to cover their losses and if Russian bonds were unsalable, all they could do was sell everything else. Thus, a LIQUIDITY crisis defies fundamentals because they are selling this ONLY because they need the money elsewhere. So the fundamental analysis provides no security for everything is connected in the global see of capital.

Edmon Safra of Republic National Bank put on a fancy dinner for the IMF. I was invited and it was all about trying to convince me that they had the IMF in their pocket and that would rescue the day. The pitch was Russia had all these nukes so no way would the IMF allow Russia to just collapse. This created a serious yet difficult situation for the Russian government. What was going on was that Russia had been running a huge budget deficit to pay for public services. They had borrowed $40 billion by issuing three-month ruble Treasury bills. This is what the “club” was bought for they were paying 30% interest to attract buyers. Bribing the IMF to prevent a default, they were all on this trade expecting free money. I refused to join and warned them that my computer projected this was going to collapse. They did not want to hear that. They were CONVINCED paying bribes would create that GUARANTEED TRADE.

The liquidity crisis this time is COMPLICATED. This time we do not have the traditional speculative boom which has produced inflation. This time we have shortages and there is NO WAY a central bank can prevent this type of inflation by raising interest rates. If anything, it will only propel the shortages so we have the ironic situation that economic decline is unfolding into 2023, but the shortages will get worse causing even higher inflation ahead.

Hence, capital is retreating out of confusion creating a period of low tide. But the standard impact is DEFLATION but that means demand is declining relative to supply. Now we have a decline in supply because of the regulations and war. Consequently, prices will rise even in a recession because it is a shortage of supply, not a decline in demand. It is this lack of understanding that is creating the liquity crisis.

As far as people taking my explanations, it is impossible to reach such conclusions unless you lived there and participated in those events.

TRACE – Omicron and beyond

Inflation Creating Cracks in the G7