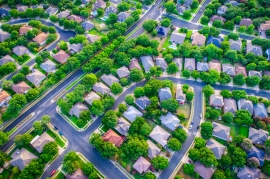 July 22, 2022 will mark the 90th anniversary of President Hoover’s signing the legislation that created the Federal Home Loan Bank (FHLB) system. Motivated by the difficulties mortgage lenders experienced during the Depression in funding loans even to creditworthy borrowers, the FHLBs were designed as a government-sponsored intermediary between those lenders and debt markets. Yet almost as soon as the FHLB Act passed, the mortgage market began to change in ways that eventually rendered that role largely unnecessary. Most lending by FHLBs today is only very loosely connected to their mission of promoting housing finance. But their current business model of borrowing extensively in short-term funding markets and providing longer-term funding to their depository institution and insurance company members carries risks for the financial system. In a recent paper, Stefan Gissler, Borghan Narajabad, and I explain the origins of these risks and suggest a set of reforms to address them.

We think the problem is a structural one that is created by the interaction of two features of the FHLBs: First, the hybrid public-private nature of the FHLBs and, second, the absence of a well-articulated contemporary purpose for them.

The ownership and control of the profit-generating FHLBs are in private hands. The members of each of the 11 FHLBs—mostly insured depository institutions and insurance companies—own the Bank and, by the terms of the Federal Home Loan Bank Act, have a majority of its directors.  There are certain governance requirements inapplicable to purely private banks and certain discrete public interest housing obligations. In general, though, governance decisions will reflect the interests of the members, which are both the shareholders and customers (borrowers) of the FHLBs.

While privately owned and controlled, the FHLBs enjoy significant public privileges. Like their siblings Fannie Mae and Freddie Mac before 2008, the FHLBs benefit from an explicit line of credit with the U.S. Treasury and from the market assumption of an implicit U.S. government backstop for the FHLBs beyond that $4 billion statutory amount. As with the obligations of other government-sponsored enterprises (GSEs), FHLB debt may be purchased on the open market by the Federal Reserve. FHLB debt has privileged regulatory status in the portfolios of commercial banks and credit unions, and is treated as government debt for purposes of the securities laws.  FHLB loans to banks enjoy a superpriority in resolution akin to that of discount window lending from the Federal Reserve.

The potential for moral hazard created by affording public privileges to privately governed GSEs is exacerbated by the absence of a well-defined contemporary mission for the FHLBs in their enabling legislation. While the law provides considerable scope for what the FHLBs can do, it provides little guidance on what they should do.  The original motivation for their creation during the Great Depression is largely irrelevant in today’s housing finance market, in which originators can readily sell mortgages to Fannie Mae, Freddie Mac, or private firms that bundle them into securities that are sold to the public. Unfortunately, Congress has never updated the purpose and role of the FHLBs, even as it has periodically expanded the range of financial firms that can be members. Nor, to be fair to those who run and regulate the FHLBs, has it provided much guidance from which the role of the FHLBs could be inferred.

In the absence of a well-defined role from Congress, the FHLBs have used their public privileges to create profitable opportunities for themselves in financial markets. The fact that these activities rely upon taxpayer subsidization may be reason enough to scrutinize them. Our special concerns arise because some of those activities have amplified funding and financial stresses, and in some cases have also impaired the missions of federal financial regulatory agencies.  In our paper, Gissler, Narajabad, and I detail how the increased maturity transformation by the FHLBs lies at the center of past and, potentially, future problems.

The basic dynamic by which the FHLBs can contribute to stress was observed during both the financial crisis of 2007-2008 and the COVID crisis of 2020. As financial stress increased, some FHLB members had serious difficulty obtaining wholesale funding, on which they had come to rely in their business models. They turned to the FHLBs, which quickly extended loans to those members, mostly with maturities of a year or longer. In the near term this lending appeared to relieve the funding shortfalls, leading some to characterize the FHLBs as “lenders of next to last resort.” However, the FHLBs had financed this lending substantially through issuing debt to money market mutual funds, which for both regulatory and risk management reasons insisted on taking only short-term debt.

Experience during the global financial crisis illustrates the limitations on this FHLB role. By the end of the summer in 2008, investors started to doubt the viability of the other housing GSEs.  Because money market funds did not differentiate in their regulatory disclosure filings among the various GSE’s, FHLBs became “guilty by association.” That is, because fund managers did not want investors wondering if they held debt from the increasingly troubled Fannie Mae and Freddie Mac, they essentially stopped investing in the FHLBs as well. FHLB financing costs soared, straining their access to debt markets.

Unlike the Federal Reserve, FHLBs cannot create their own liquidity.  As a result, the FHLBs could no longer provide funding to their members, which had to rely on liquidity provided by the Federal Reserve, the true lender of last resort. The subsidized lending FHLBs provide before financial stress develops, as well as the lending they provide in the early stages of a stress period that allows members to defer adjustments to their balance sheets, may both ultimately be non-sustainable as the level of stress rises.

The role of money market mutual funds in the increased maturity transformation of FHLBs also illustrates how the policies of financial regulators can be undermined by FHLB activities. After the Securities and Exchange Commission adopted a regulation in 2014 limiting the attractive feature of a fixed net asset value—$1 per share—to shares of money market funds that hold only government securities, the demand for government securities skyrocketed. The FHLBs essentially facilitated the conversion of prime funds (money market funds that hold both public and private debt) to government-only funds by issuing nearly a quarter of a trillion dollars in short-term debt. The funds raised with that debt were recycled to FHLB members at favorable rates. Thus, despite the aims of the SEC regulatory reform, the link between money market funds and bank funding has been preserved, only now with an implicit government guarantee.

An Approach to Reform

The absence of a well-defined appropriate role for FHLBs in contemporary housing markets argues for Congress considering whether there is any such role, ideally as part of an overhaul of federal housing policy more generally. As with so many other national problems, however, the prospects for legislative action are not promising. Accordingly, Gissler, Narajabad, and I recommend that the Federal Housing Finance Agency (FHFA), the regulator with jurisdiction over the FHLBs, undertake a three-pronged reform program.

First, FHFA should enhance both its own transparency and that of the FHLBs to roughly match practices and requirements of the federal banking agencies for comparable activities. At present, it is difficult for outside analysts to determine precisely what those practices and requirements are. Second, in fulfillment of its oversight mandate from Congress, FHFA should revisit its regulations and supervisory guidance to ensure that the FHLBs cannot engage in forms of maturity transformation that can intensify systemic liquidity strains during periods of stress.  Third, under the auspices of the Financial Stability Oversight Council, the FHFA should engage in regular consultations with other federal financial regulators to minimize the adverse impact of FHLB activities on the statutory missions of those agencies.

Organizations whose motivating purpose has been superseded by events often try to perpetuate themselves by taking on new roles. Sometimes they succeed in adapting to perform another valuable social function, sometimes not. When an organization is granted governmental privileges, there should be careful scrutiny of any new role assumed by the organization to be sure the public continues to benefit. This is especially the case when the organization’s new roles may affirmatively cause harm to other social goals. The FHLBs appear to us the exemplary case of organizations that have carried on for decades without a clear public mission. While they do not at present pose an acute threat to financial stability, reform undertaken now would be a salutary example of addressing latent risks, rather than just fighting the proverbial last war.

What can we expect from the January 6 committee hearings?