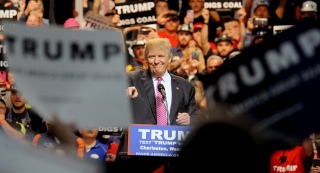 In Nebraska, Trump faced off against a powerful Governor, Pete Ricketts, who, over time has built a political machine based on a family fortune. Ricketts endorsed Jim Pillen, a hog farmer, and a University of Nebraska Regent. Trump endorsed Charles Herbster, a farmer, a rancher and a January 6 participant who tried to turn accusations against him for sexual harassment into a badge of honor. Calling the accusations, a “politically-timed smear,” Herbster said, “They did it to Donald J. Trump. They did it to Brett Kavanaugh.”

For Trump politics is personal. He likes celebrity candidates—they of course, remind him of his own entrance into politics. If there is no celebrity, he looks to how the candidate feels about him. (Other than that, he mostly makes safe bets, endorsing incumbents and candidates who are running in uncontested races in order to make his overall numbers look good.) But sometimes he bets against the establishment. In Ohio, his bet against the Republican establishment paid off with his endorsement of J.D. Vance, the famous author who won the Senate race in spite of having started off his career in politics calling Trump an “idiot.”

But in Nebraska, there was no celebrity candidate, so Trump took on the Republican establishment. The outgoing governor’s wealthy family funded a stop Trump PAC back in 2016. Once Trump won, the family fell in line behind Trump. But Trump never forgets. Despite the Governor’s plea to stay out of the race and away from Herbster, Trump endorsed anyways. Herbster lost, but only by 3 points.

Turning to West Virginia, the story where Trump’s candidate won, Trump’s fixation on loyalty is also on display. Because the state lost a congressional seat in redistricting, the primary in West Virginia’s second congressional district ended up with two incumbents running against each other. Trump’s candidate was incumbent Alex Mooney who ran against incumbent David McKinley and beat him by 19 points. McKinley went into the race with what looked like a lot of advantages. He was endorsed by the Republican Governor and by Senator Joe Manchin. Most of the new district consisted of territory that had been in David McKinley’s old district. What’s more, McKinley voted for the bi-partisan infrastructure bill and repeatedly touted the billions it would bring to West Virginia. West Virginia is a very poor state that has continually relied on largesse from Washington; in fact, it ranks second in the nation, behind New Mexico, in a ranking of states’ dependency on federal aid. In contrast, Mooney, voted against the infrastructure bill—which had become Biden’s infrastructure bill even though Trump had proposed one trillion dollars in infrastructure spending himself.

But outweighing all these factors was McKinley’s mortal sin—a vote in favor of creating the January 6 Committee (one of only 35 Republicans) looking into the insurrection. Given that West Virginia was Donald Trump’s second-best state in 2020 (he won there by 38.9%, more than any other state except Wyoming where he won by 43.4%) it was not surprising that Trump’s endorsement of Mooney helped him win by 19 points.

What we know so far is that loyalty to Trump’s “big lie” is the ticket to his endorsement—unless of course, you are famous.

Rethinking the incidence of the corporate income tax

Rethinking the incidence of the corporate income tax