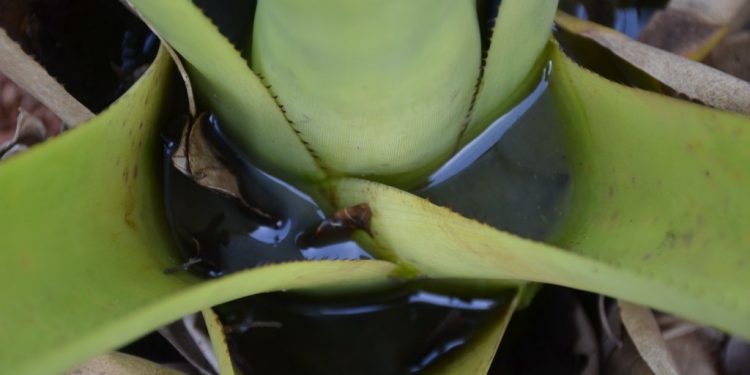 The aim of this study was to understand how biogeographic contexts influence invertebrate community responses to climate change. The replication of standardised experiments testing the effects of climate change at several geographical sites allows us to examine the generality of the responses of communities to emulated changes, while accounting for the interactions between global climate change, and local biotic and environmental contexts. In this study, we manipulated the frequency and amount of rainfall entering natural microcosms from 18°N in the Caribbean (Puerto Rico) to 29°S in South America (Argentina). We found that the stability of functional community structures, in the face of altered precipitation regimes, are not based on the local adaptation of species to natural variability, but instead on the redundancy of functions ensured by coexisting species. This redundancy plays an insurance role in the face of biodiversity loss.

This paper is a product of a larger distributed experiment, designed and implemented by the Bromeliad Working Group (BWG)— a network of South-American, North-American and European researchers who conduct replicated experiments on bromeliad invertebrate communities and food webs across Neotropical sites. More generally, BWG members also share their data collected from multiple sites to carry out large scale syntheses on functional diversity, community assembly patterns, food webs, etc. With this experiment, we wished to analyse the effects of different scenarios of precipitation change at different Neotropical sites. As we were gathering and organizing the abiotic and biotic data from our distributed experiment, some members of the BWG were also involved in a synthesis group at the French Centre for the Synthesis and Analysis of Biodiversity (CESAB), aiming at analysing the functional diversity of bromeliad food webs throughout the Neotropics. This synthesis group has produced a database of functional traits for 852 known taxa of bromeliad invertebrates collected from Mexico to Argentina. We therefore had the idea to leverage the power of our trait database by combining results from the precipitation manipulation experiment with new information on species’ functional traits. This was done to examine how invertebrate traits and functional diversity mediate the responses of entire communities to changes in rainfall patterns across the Neotropics.

This study is original in that we emulated extreme droughts to frequent downpours relative to the current local baselines to explore community responses to large climate parameter spaces. We further tested generalities in community traits and environment relationships across sites. On the methodological side, the experiment required a focal system that is highly replicated in nature, that can be easily manipulated and exhaustively sampled, and that spans a broad range of environmental conditions. The rainwater-filled leaves of Neotropical tank bromeliads and their aquatic invertebrate communities were the perfect system for this purpose.

The paper should be of interest to a broad audience of ecologists, perhaps more particularly to readers interested in the emerging field of functional biogeography. For policy makers, an implicit message is the need to preserve functionally-unique species and the buffering properties of their habitats. Press releases are planned, for we hope that the charismatic nature of tank bromeliads will focus the public’s attention on current ecological research pertaining to climate change issues.

Surprisingly, we did not face any noticeable difficulties from set up to take down of the experiment at the various field sites. The different teams following up the various sites kept in contact to collectively solve local issues, and some of us, including Faculty, PhDs and Post-Doctoral fellows travelled across sites to ensure consistency in methods. We also attended workshops to organise the data, set up online collaborative tools, and discuss statistical workflows. Aside from the science, it has been a great and multicultural human adventure.

Beyond our specific study system and species, our research carries two important messages. 1) The future of communities and ecosystems cannot be solely predicted from projected climate scenarios because both local environments and biological diversity mediate the impacts of global-scale changes. 2) We support an “insurance hypothesis” rather than a “local adaptation hypothesis.” That is, the response of functional community structure to climate change is primarily driven by functional redundancy within species pools, not by physiological matching to local conditions.

The next big question is to understand how different scales of biological organisation (organisms, functional community structure, metacommunity, and their interactions) drive community re-assembly and resilience following climate events that range from the current norm to extreme events. The experiments conducted at a single site, or at multiple sites, mostly focused on the immediate outcome of temperature or precipitation change (“before-after”), ignoring the recovery and resilience trajectories after a disturbance (e.g., a severe drought) has passed. Hence, we don’t know what organismal traits and ecological mechanisms mediate the post-disturbance trajectory of communities and ecosystem functions. Secondly, metacommunity theory predicts that immigration from source patches should prevent extinction in sink populations, but we know nothing of how habitat patch-size and distance-to-source populations interactively mediate resilience to drought.

Back in 1989, after my BSc in life science, I attended a summer school of hydrobiology at the field station of Besse-en-Chandesse (France) where I learned a lot about aquatic invertebrates and freshwater ecosystems. This is when I really got involved in ecology and decided to pursue a Master’s and PhD. I am currently Full Professor at University Paul Sabatier – Toulouse, France, and Head of the Department of Functional Ecology & Environment. I’m interested in the mechanisms that drive community and ecosystem responses to local and global scale disturbance. I mostly study aquatic invertebrates, but I sometimes collaborate on works that deal with fish, terrestrial insects, or plant-insect interactions. Over the past 10 years, I have almost exclusively focused my research on the rainwater-filled leaves of tank-bromeliads—using this natural microcosm as a model ecosystem in either observational studies or manipulative experiments.

Community ecology is about patterns and processes that involve many coexisting species—sometimes hundreds of species from different clades. Accumulating knowledge of their natural history is a long process, but I do believe this is key to critically interpret model outputs and recognize what is behind the numbers, otherwise you will only manipulate statistical units and you might lose connection with the real world. As an invertebrate ecologist, I was impressed and inspired by the generation of freshwater scientists who preceded mine, for I felt they were mastering its entirety, from the natural history of species to big ecological theories. My advice for someone in my field would therefore be: know your study organisms—spend time in the field observing them in nature, learn what they eat, how they move and interact with their environment, how they reproduce, etc. If you are lucky to base your research on fieldwork, many ideas will pop up while watching nature doing its thing!