Alex Austin: You get what you’re given? Solitary bee larvae demonstrate the ability to regulate their nutritional intake 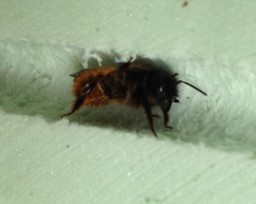 Nutrition is linked to almost every aspect of an animal’s behaviour and physiology, and we really wanted to explore this in solitary bees. Bee declines are no secret, and we know that lack of nutritional resources is one of the major factors; however, we know so little about their nutritional needs, especially in solitary species. We also know remarkably little about the nutritional relationship between the parents and offspring of any animal, and bees are a perfect example of this. In fact, our knowledge of larval bee nutrition is astonishingly sparse given their ecological significance. Therefore, we decided that this would be our focus—to investigate whether larval bees had any control over the nutrition they consumed. If they could not, then they relied purely on parents—parents that a) may not be able to detect the nutritional quality of the food they provided, and, b) may not actually share the same interests as the larva.

O.bicornis in nest. This was our model organism, Osmia bicornis, or the Red Mason Bee—A solitary species common in Northern Europe that has a precedent for experimental manipulation. They readily use artificial nest constructs which allowed us to manipulate their pollen provisions (Credit: Alex Austin)

We designed an experiment to determine whether larva showed any ability to regulate their intake of protein and carbohydrate by manipulating their pollen provisions. This would be the first time a truly solitary hymenopteran was investigated using the Geometric Framework for Nutrition (GF) so we were really excited about what we might find. Surprisingly, not only did we find that bee larvae did show the ability to regulate their intake, they also regulated to a specific amount of carbohydrate as opposed to protein. This was unexpected and exciting in myriad ways. 1) Our solitary bee species, Osmia bicornis, is a mass provisioner with larvae which receive a finite amount of food, so why regulate? And, 2) previous studies in social bee larva had indicated regulation to a protein, not carbohydrate, which is more in keeping with what we expect in free-foraging insects. We observed the complete opposite pattern in our study!

I have a real passion for bees, particularly the unsung ‘solitary’ species—an interest my new supervisor, Dr. James Gilbert, shared. However, it was when James introduced me to the GF that the project really started shaping up. I was hooked! I believe the GF (like all the best scientific concepts) is, at its core, simple and elegant but it has the ability to incorporate the complexities of the biological world. N.B. Simply put, the GF allows us to investigate the foraging decisions of animals and map their nutritional intake graphically in multi-dimensional nutritional space.

O.bicornis larvae in nest. It was really easy to see how the larvae grew and developed within the nest with our experimental set-up. Our nest had a removable lid meaning we could get access to developing larvae easily (Credit: Alex Austin)

What we found certainly showed that we shouldn’t rely on results from more commonly studied honeybees to infer what may occur in other species. Additionally, the more we studied the data the more we realised that our results had far broader implications. We realised that what we’d found was important to parental care more generally, and to animals that practise mass provisioning and whose offspring are sedentary. Lots of new questions arose. For example, was the ability to regulate a method for offspring to mitigate parentally imposed costs as a result of differing evolutionary interests? This really made us think about our findings in terms of understanding the nutritional ecology of species with parental provisioning more broadly.

Both James and I were really proud of the work we’d done, and I think one of the key contributors to our success was that we clicked immediately. I was James’ first PhD student, which I actually think was an advantage, as we worked together like colleagues as much as student and supervisor, each of us coming up against challenges and solving them as a duo; and the research certainly came with challenges. There are a couple of problems that I’m pretty proud of overcoming, with one in particular that I think is worth mentioning for anyone reading this who is from a similar background to me.

Firstly, our research budget was tiny and the fact that we pulled it off and produced a paper worthy of being published in Functional Ecology is something I’m very proud of. Value for money is something that doesn’t get as much attention in science as it should, and I really believe we delivered that with this paper.

Secondly, being the surrogate parent to a group of bee larvae was one of the most exhausting things I’ve ever done! Long 15-hour days making their food and changing their diets, going home just to sleep, and then starting all over again took its toll. It gave me a huge amount of respect for a number of my colleagues who did all their research and looked after a young family at home (a journey I’m about to embark on myself). They were as inspiring to me as any notable scientist.

O.bicornis larvae – experimental. This image shows the larvae on their formulated provisions. I removed the larva from its natal nest and placed it into a new one that contained the food I wanted them to consume. These were my babies, and I spent many a long night looking after them as they grew (Credit: Alex Austin)

Lastly, I’m a first gen. I’m the first in my family to attend university in the traditional sense and I’m from a working-class background. Never had I felt this more acutely than coming into academia. I remember looking at the credentials of senior scientists and thinking, ‘Well, not much chance for someone like me then.’ The ugly word ‘pedigree’ and my lack of it swam about in my thoughts more often than I liked. I must stress, not once was I ever discriminated against at my institution, but I mention this as I think many people like me feel like imposters in a field that has traditionally been an elite profession. It is definitely changing and although there is certainly more work needed to level the playing field, I believe that much of the feelings of inadequacy come from our own minds. I’d encourage anyone who feels this way to not let it get the better of you and be open with your colleagues about it. I assure you, there’ll be plenty of others feeling the same way.

I was so excited when I started my PhD. I’d been trying for years to find a place and I remember saying to myself, ‘this is the last year, if nothing comes of it then brush yourself off and move on’. So, when I got the call to say that I’d been accepted I was utterly overjoyed.

However, it’s safe to say that my PhD didn’t exactly start smoothly. Just weeks before I started, I got a call from my prospective supervisor to say that he’d found another job and would be leaving. I remember the horrible sinking feeling in my gut at the thought of getting this close only to miss out, but as it happened there was a new lecturer at the university starting his first permanent position that would be happy to take me on. At the time, I thought ‘Great, worst start to a PhD ever?’. Wrong. It was the best thing that could’ve happened.

Top tip: Things will go wrong on a PhD. Constantly. Don’t let it get you down! Solving those problems is what it’s all about, and you’ll be a stronger scientist (and person) for it.

Shipping hive to Sydney. I now live in New South Wales, Australia, where I’m employed at Ku-ring-gai Council where I work with native bees on a daily basis. I have a great work-life balance and really love what I do. My PhD was a critical component in achieving everything I have accomplished (Credit: Lindy Williams)

Where am I now? Well, after my PhD my wife and I fulfilled a lifelong dream of moving to Australia. We arrived down under in 2019 having never been before and with only two suitcases to our name. We couldn’t be happier. I work in local government as an environment officer, and manage and run a native bee program in Northern Sydney. I get to work with bees every day, engage the public in invertebrate conservation, and collaborate on research, currently with Sydney and Macquarie University.

The protester paradox: Why do anti-Islamist activists look toward clerical leadership?

Figure of the week: Developing digital infrastructure in response to COVID-19 in Africa

Ratifying Kigali: Can the U.S. go the distance on a global climate treaty?