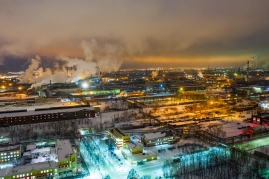 The scientific community is at the forefront in raising the alarm over climate change and providing incontrovertible evidence on the link to human activity. Yet economic policies to decarbonize economies continue to lag behind the urgency of the warnings. Indeed, the lukewarm response of the economic policy community is part of the disconnect between knowledge and action in addressing the climate crisis. Some excellent research notwithstanding, mainstream economics has not factored climate change into its growth calculus. Part of the reason is the fear that strong climate action will sap short-term economic growth.

Climate action is not costless. By one estimate, investments of an additional $3.5 trillion annually will be required to reach net zero carbon emissions by 2050 by limiting global warming to 1.5 degrees Celsius to reduce the chances of catastrophic climate events. The message from the economics of externalities or spillover harm is that the cost of action is far lower than the carbon and climate cost in the case of inaction.

To move the needle on climate action, mainstream economics needs to get into step with the climate science.

In finding solutions to daunting problems, be it HIV-AIDS or terrorism, a key is evidence linking cause and effect. Scientists have been clear in connecting the dots in the climate change ecosystem—greenhouse gas emissions, rising temperatures, sea level rise worsening floods and storms, and heatwaves aggravating fires (see Figure 1)—but cautious in attributing individual events to global warming. But new studies are doing just that—concluding that the extreme heatwaves in Siberia and the Pacific Northwest in 2021 would not have occurred without climate change. Or that climate change made the 2021 extreme rains and floods in Belgium and Germany more likely and more intense.

Figure 1. Connecting the dots in the climate change ecosystem

The economics of negative externalities call for taxing carbon emissions. While around 40 countries have initiated carbon pricing, powerful lobbies continue to block climate action. Big oil has been misleading the public about the damage from greenhouse gases since the 1970s. Fossil fuels enjoy large subsidies, which—inclusive of their estimated damage to health—add up to $5 trillion a year. China, Japan, and the United States are the largest financiers of new fossil fuel plants. Multilateral development banks (MDBs) have also invested in fossil fuel projects.

The relative absence of economics at the policy table is an opportunity lost. At the last count, the top economic journals still barely publish articles on climate change. The widely cited Quarterly Journal of Economics had not published any and the quantitative Econometrica—only two. A Nobel Prize in economics went to Nordhaus for “integrating climate change into long-run macroeconomic analysis,” but the cited work and its follow up did not recognize exponential damages, tipping points, and irreversibility.

Underlying this error of omission is valuation centered on GDP, a gross measure of production that does not net out environmental and biodiversity damages. Making no allowance for carbon intensity is a signal to maximize GDP growth regardless of the damages. The “East Asia miracle” implicitly celebrated fast GDP growth at the expense of ecological destruction. Rapid growth in China and India, as in advanced economies earlier, has worsened the environment. Southeast Asia has the highest rate of increases in emissions, despite being the most climate vulnerable.

Once conventional economic growth is adjusted for CO2 emissions per capita, a truer picture emerges that can help guide policy. One such measure is the planetary pressures-adjusted human development index (PHDI) proposed by the United Nations Development Program to qualify its own human development index (HDI). Country rankings change notably in going from HDI to PHDI—for example, top-ranked Norway falls 15 places, and the U.S.—ranked 17th—drops 45 places.

The World Bank has estimated national wealth as the sum not only of produced capital and human capital but also natural capital for 146 nations from 1995 to 2008. The United Nations Environment Program (UNEP) also estimates inclusive wealth as the “social value of natural capital, human capital and produced capital” of 135 countries’ during 1990-2014. UNEP shows a larger adjustment for environmental loss, presumably since the World Bank’s measure, according to the report, does not subtract the social cost of carbon from fossil fuels, nor include the value of carbon sequestration from conserving ecosystems.

Growth analysis rightly emphasizes productivity in addition to physical and human capital accumulation as well as worker participation, but ignores environmental sustainability. The World Bank and the International Monetary Fund, which have produced reports on climate change, must integrate climate impacts in growth projections. A big role for the MDBs could be in helping to address global public goods, like the environmental health across countries.  In this case, they could ramp up lending for climate mitigation and adaptation, as some promise to do. The World Bank has a new Climate Change Action Plan that, among other things, aims to align operations of the International Finance Corporation to the Paris Climate goals by 2025.

To move the needle on climate action, mainstream economics needs to get into step with the climate science. Growth economics—influential in country policy—could integrate climate change and the environment. It is time to complement, if not replace, gross domestic product with a measure of quality growth that is net of climate cost damages.

If the Metaverse Is Left Unregulated, Companies Will Track Your Gaze and Emotions

The Threat to Liberty is Coming from Inside the House