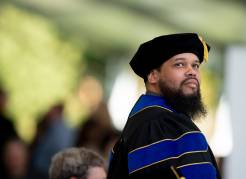 Increasing the diversity of students in Ph.D. programs is crucial to creating a pipeline of future researchers and educators in the nation’s system of higher education. College faculty remain far less racially and ethnically diverse than both college students and the national population as a whole. As of 2017, only 24% of the nation’s postsecondary faculty were nonwhite, compared to 45% of students.

Given the relative lack of diversity in the nation’s graduate programs, it is perhaps unsurprising that the pipelines into research positions in both the academy and industry are still disproportionately white. In 2016, for example, less than 9% of doctoral degree recipients in STEM fields were Black, Latino, or Native American. This underrepresentation severely restricts the ability of research to be adequately informed by a broad diversity of backgrounds and perspectives, and to provide representation in the academy to future generations of scholars and researchers.

Our new study, just published in AERA Open, provides evidence that increasing the financial support offered to potential Ph.D. students offers a promising approach for attracting a more diverse pool of doctoral students. Along with co-authors Christopher Bennett, H. Kenny Nienhusser, and Milagros Castillo-Montoya, we studied Ph.D. student application and enrollment patterns at a large public research university in the Northeast. We were interested in how the diversity of the Ph.D. students changed corresponding to a change in the financial support offered to doctoral students.

For students entering in the fall of 2015 and the fall of 2016, the university offered a comprehensive fellowship to some students in education Ph.D. programs. The fellowship offered full tuition (around $15,000 for in-state students and $35,000 for out-of-state students), a guaranteed paid stipend for research assistantship work (between $22,000-$24,000 per year), highly subsidized health care, and funding for travel to academic conferences for four years. Many top-ranked programs have long offered similar (or better) financial supports to Ph.D. students, but this is not the norm across all Ph.D. programs, where students often take on substantial financial responsibility for their studies (as was previously the case at this institution).

By comparing Ph.D. programs eligible for the fellowship to other programs that were not eligible (we separately use both Ph.D. programs across the university and master’s programs from within the School of Education as comparison groups), we found that the number of applicants and the racial/ethnic diversity of the applicants and enrollees increased substantially after the introduction of the fellowship program. In the first year of the program, applications increased by 28%, going from 133 to 170. The share of Black applicants more than doubled, from 4.5% to 11.2%. Even after accounting for trendlines at other programs of study in the university, we found evidence of significant increases in the percentage of applicants and enrollees who were Black, with suggestive evidence for Latino students and students who identified with multiple races. Notably, the increase in diversity was not accompanied by any clear change in academic preparation (as measured by required GRE scores).

While the fellowship program was not targeted specifically for racially and ethnically minoritized students, previous research suggests several reasons why we might expect such a fellowship to disproportionately benefit Black and Latino students in particular. In 2019, Black and Latino families had one-eighth and one-fifth as much wealth as the median white family, respectively, making the financial burdens of graduate school especially large. Moreover, Latino families have been found to be especially averse to taking student loans, making graduate school potentially even more out of reach without institutional financial support.

In order to understand why the fellowship may have impacted students’ decisions to apply or enroll, we also surveyed current Ph.D. students at the university. When we asked which factors were the most important to students when deciding where to apply, various financial factors (availability of stipends, amount of stipends, and scholarships for tuition) all ranked at the top of the list. These financial factors were rated as especially important for racially/ethnically minoritized students. This offers a key insight into why the fellowship was able to attract a more diverse applicant pool and enroll a more diverse set of students.

We also surveyed students about their experience in their Ph.D. program, and found that the students who were offered funding were more satisfied with their overall financial situation, as well as their access to health care and mental health services. Students offered funding were also able to spend more time on work related to their degree and had to spend less time on work unrelated to their studies, compared to other education Ph.D. students who did not have funding from the institution.

In recent years, several institutions have taken similar steps to reduce the financial burden of graduate study, with institutions like the University of Chicago, the University at Buffalo, and Emory University all substantially increasing their support for Ph.D. students. In 2019, New York University made the medical school tuition-free—and subsequently saw a 102% increase in students who were from populations underrepresented in medicine.

For institutions and policymakers looking to increase the diversity of graduate programs, this study offers financial support packages as a potential policy lever. Given that some universities operate in states with affirmative action bans (and with recent movement from the Supreme Court on Students for Fair Admissions, Inc. v. President & Fellows of Harvard College), it is notable that the fellowship we studied was race-neutral in design but had the greatest impact on racially/ethnically diverse students. Increased financial support may offer one possible avenue for attracting a more diverse Ph.D. student applicant pool, even in places where race cannot be explicitly considered in admissions decisions.

The lack of diversity in doctoral programs represents a clear shortcoming. By increasing the diversity of new scholars being trained through doctoral study, we can expand the questions that research aims to explore and bring new perspectives that will inform research across a range of disciplines. We can also build a base of teachers and of researchers in both academia and industry that reflects the nation’s entire population. With the evidence that this short-term incentive and others like it can immediately change the representation of students in Ph.D. programs, increased financial support for Ph.D. students should be seriously considered as a promising policy for universities and policymakers.

The male college crisis is not just in enrollment, but completion

Overruling Roe v Wade – To Be or Not To Be