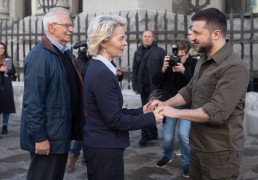 Welcome to the fifteenth edition of the Trans-Atlantic Scorecard, a quarterly evaluation of U.S.-European relations produced by Brookings’s Center on the United States and Europe (CUSE). To produce the Scorecard, we poll Brookings scholars and other experts on the present state of U.S. relations with Europe — overall and in the political, security, and economic dimensions — as well as on the state of U.S. relations with five key countries and the European Union itself. We also ask about several major issues in the news. The poll for this edition of the survey was conducted from April 5 to April 8, 2022. The experts’ analyses are complemented by CUSE Director Thomas Wright’s take on what to watch in the coming months.

Center on the United States and Europe Director Thomas Wright lays out events, issues, and potential developments to watch for in the months ahead.

I am delighted to share with you the fifteenth edition of the Trans-Atlantic Scorecard, a quarterly evaluation of U.S.-European relations produced by Brookings’s Center on the United States and Europe.

The first quarter of 2022 in trans-Atlantic relations has been dominated by the Russian troop buildup on the border with Ukraine and launch of the invasion on February 24. This iteration of the Trans-Atlantic Scorecard offers a snapshot of the impact of the war on U.S.-Europe relations to date, as well as other developments from the quarter.

On the questions specific to events and developments of this quarter, respondents unanimously disagreed that there would be a full Russia-Ukraine ceasefire before April 30, 2022. 85% believe that the war in Ukraine will expedite Europe’s green energy transition, while 80% agreed that China’s position on Russia would damage EU-China relations (10% were neutral and 10% disagreed). 89% thought that U.K.-EU relations had improved since the Russian invasion of Ukraine. On the question of whether Macron would face widespread discontent, weakening his capacity for reforms, even if reelected, respondents were divided. 60% agreed, while 10% disagreed and 30% were neutral.

Looking ahead to the second quarter of 2022, our attention remains fixed on Russia and Ukraine. We will continue to closely follow trans-Atlantic security relations in the coming months, including how Germany’s historic shift in defense policy influences European security debates and possible Finnish and Swedish accession to NATO. With the French two days away from going to the polls to choose between the incumbent Emmanuel Macron and the far-right populist Marine Le Pen at the time of writing, we will also be watching the outcome of the election and impact on Europe and the world. Finally, as we look ahead to late spring and early summer, we will be watching the G-7 and NATO summits in June.

Thank you again for reading the Trans-Atlantic Scorecard.

Mandate Drift at the Fed Is Par for the Course

Mandate Drift at the Fed Is Par for the Course

Lisa Cook is Unqualified for the Federal Reserve Board