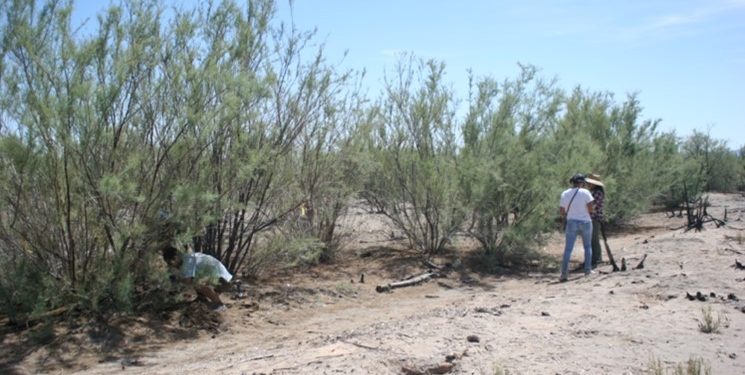 In this new post, Randall Long, a new ecological researcher working at the University of California-Santa Barbara, USA, shares his paper: Spenders versus savers: Climate-induced carbon allocation trade-offs in a recently introduced woody plant—recently shortlisted for the Haldane Prize for Early Career Researchers.

As ecologists we assume that trade-offs exist in organisms when limited resources are allocated to multiple competing demands. In plants, we often consider this in the framework of the plant economic theory proposed by Bloom, Chapin, and Mooney in 1985. This theory predicts that plants are under selection to allocate carbon to growth, reproduction, and/or storage to maximize fitness in their environments. There has been a lot of research and support for the expected trade-offs between these pools across broad taxonomic scales and life histories—for example, annuals allocate less to storage than long-lived trees do; however, exploring the nuances of the theory within closely related taxa is a still emerging field. I was working with Tamarix, a non-native woody plant in the American Southwest, and thought that the way that different populations allocate carbon to these competing pools may explain part of its invasive success.

I was fortunate while I was forming these questions during graduate school that my collaborators had been planning to set up a Tamarix common garden in Yuma, AZ. They had collected cuttings of Tamarix from across a strong thermal gradient in Arizona, with a large range in both minimum temperatures (-7.6 to 6.3°C) and maximum temperatures (32.4 to 42.4°C). At the common garden, I collected data to represent the three competing pools outlined in the plant economic theory. Canopy growth and basal area increase over a growing season was used to represent growth, number of flowering catkins were counted as a proxy for reproduction, and root and stem non-structural carbohydrates were used to symbolize storage. I predicted that plants from the colder environments, that could be exposed to late freeze events in the spring that cause tissue mortality of new growth, would allocate greater carbon to storage to fuel regrowth of foliage. Conversely, the plants from locations that never experience these late freezes should allocate their carbon to growth and reproduction.

Tamarix growing at the Cibola National Refuge in California. Some of my work at these sites led me to asking whether populations in warm areas like this allocate carbon differently than those from colder locations (Credit: Randall Long)

We found that populations from colder environments did indeed allocate greater carbon to storage with the expected reduction in growth and reproduction. We found a slightly more complex story with the plants from warmer locations, and the pattern was not immediately obvious. We did find that they had less storage than cold locations, but without a significant increase in growth and reproduction. After looking at graphs with non-significant trends for a long time, and feeling like I missed something, it dawned on me that the plants were allocating carbon to growth OR reproduction. Some of the warm populations had a lot of flowering catkins and some had a lot of biomass, but none of them had both. To address this, I normalized the data for all three metrics by converting the values to z-scores and then combined the scores for reproduction and growth into one score for spending. When I compared the scores for spending to saving (storage as non-structural carbohydrates) the relationship became clear—warm populations were spending carbon while cold populations were saving carbon.

Our research stands out as we were able to detect this nuanced trade-off that supports the plant economic theory within a species. The fact that this perennial woody species was introduced to these sites just over a hundred years ago, and that we are seeing divergence in allocation, suggests that the selection pressure for spending vs storage is strong. Our work also highlights that simply measuring storage and comparing it to growth may miss trends as carbon could be allocated to another pool that increases fitness—such as reproduction or defence. The study contributes to our understanding of carbon dynamics in plants, and should be especially of interest to those studying long-lived woody plants.

We were fortunate enough to be working with a woody plant that grows relatively quickly, as setting up common gardens with long-lived species can be challenging. We hope that other researchers with common gardens can expand on our findings and explore whether these relationships hold up in other species. One of the biggest gaps in ecology remains in our understanding of these smaller, but ecologically important, differences between populations. This is especially pertinent as we try to understand how various populations will respond to environmental stressors.

The Tamarix common garden located in Yuma, AZ. The garden was planted with 10-15 cm cuttings in April 2015 (Above).
By October 2016 the plants had growing to over 3m in height and the canopy was mostly closed (Bottom) (Credit: Randall Long)

Although we were fortunate to be working with a relatively fast-growing woody plant, we faced other challenges due to the climate of the Tamarix common garden. We collected data throughout the year, including in July and August, when temperatures in Yuma are regularly over 40 °C. One day, when collecting gas exchange data with a Licor-6800, the machine stopped working because the temperature reached 50 °C! Of note, when I told a Licor representative the types of measurements I was going to make and asked if he thought the machine would work at those high temperatures, he said he would guarantee it to 50 °C. Needless to say, I was unable to get a useful data set from that day.

My path to ecology has been a winding one. I grew up on a family farm and was always interested in plants. I worked in agriculture into my late twenties at which point I went back to school to get a bachelor’s degree to advance my agriculture consulting career. While I was an undergraduate at CalPoly, I took a class with Dr. Matt Ritter and realized that my passion for plants had less to do with agriculture and more to do with observing plants. I also realized that it was way more fun to make these observations in nature with unruly plants as opposed to well behaved plants in neat rows. I started becoming interested in ecophysiology and applied to the graduate program at the University of California, Santa Barbara, where I worked with Drs. Tom Dudley and Carla D’Antonio and obtained my PhD in March 2020.

After leaving Santa Barbara, I worked as a postdoc with Dr. Juliana Medeiros at the Holden Arboretum in Ohio, where I continued to investigate intraspecific differences in woody plants—this time looking at Juniperus virgiana and how populations that are encroaching on grasslands differ from those found in its more historic range. I currently live with my partner in Portland, OR where I am a visiting assistant professor in the biology department at Lewis and Clark college and teach in the Ecology and Conservation Biology. My lab focuses on exploring trait plasticity in conifer species by using arboretums and botanic gardens across the United States.

If I had a time machine to go back and give young grad student Randy (or any other grad student) some advice, I would tell them to always do research that is interesting to them and surround themselves with good support. During my PhD, I started off with a different question but started getting bored, so I changed to thinking more about trade-offs in plants. I was much happier after changing paths and do not know if I would have finished the other project. I have been fortunate that I had a great network of friends and collaborators during my PhD, and Juliana was the best postdoc advisor I could have hoped for at that time in my career. Whenever we would discuss doing something new, she would ask “How is this going to get you the job you want?” That is the type of person you want on your team!

Healing Democracy from the Bottom-Up