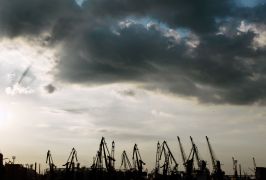 This was to be the year of post-COVID normalization, labor market healing, and a growth revival. Instead, it is turning into a fraught period of geopolitical realignments, persistent supply disruptions, and financial market volatility, all against the background of surging inflationary pressures and limited room for policy maneuver. The latest update of the Brookings-Financial Times Tracking Indexes for the Global Economic Recovery (TIGER) shows an overall loss of growth momentum, with considerable unevenness across countries in their vulnerability to adverse domestic and international developments.

The war in Ukraine, the resurgence of COVID-19 in China, and the limited macroeconomic policy space that now confronts most governments will make 2022 a tough year for global growth. The disruptive impact of COVID-19 seems contained in most other parts of the world, although it remains a wildcard as new variants emerge.

The spike in geopolitical tensions has exacerbated global supply chain disruptions. With prices already surging and demand holding up well in most major economies until recently, an escalation of inflationary pressures around the world is in prospect. Consequently, most governments and central banks cannot easily use monetary or fiscal policy to bolster demand that shows signs of flagging in the face of mounting economic uncertainty and financial market volatility. Consumer and business confidence have taken a hit, which bodes ill for consumer demand and especially for business investment.

Click a country name below the Composite Index to view charts for the main TIGER indexes by country.

The U.S. economy continues to power along, with the labor market in particular having healed to pre-pandemic levels, at least in terms of headline employment and unemployment numbers. Industrial output has been robust while domestic demand overall remains strong and continues to be a major engine of global growth. But the Fed is at real risk of losing control of the inflation narrative and could be forced to tighten even more aggressively than it has signaled, raising the risk of a marked slowdown in growth in 2023. High oil prices, yield curve inversion, and a flailing stock market are all signs of and feed into a sense of impending difficult times.

China’s determination to stick to its zero-COVID strategy seems increasingly unviable. Consumer demand, investment, and production are all showing signs of weakening, which could have implications beyond China. Housing prices have leveled off, financial pressures have receded, and consumer price inflation remains relatively moderate. This implies that, unlike in most other major economies, the Chinese government and central bank have room for and probably will invoke more stimulus measures to counter weakening growth momentum. One constraining factor is the government’s commitment to holding the lid on longer-term financial risks.

Eurozone economies are engaged in the difficult task of weaning themselves off from Russian natural gas, which will be disruptive to some industries although the overall hit to growth could prove modest and short-lived. The German economy was in the midst of a strong rebound that now appears shakier if diminished energy supplies begin to exact a toll. Japan’s consumption-driven rebound has been derailed by the disruptive effects of omicron, clouding the prospects for a sustained recovery. The U.K. economy rebounded strongly from the pandemic and into 2021 but faces a difficult period ahead with rising inflation, higher taxes, and supply chain disruptions adding up to a formidable set of headwinds.

The vise is tightening further on many developing economies that were already suffering from surging inflation worldwide, a rising dollar, and unfavorable financial conditions that will restrict their access to foreign funds. Surprisingly, most major emerging market currencies have generally held up well, reflecting modest current account deficit financing needs and healthy stocks of foreign exchange reserves. And the spike in commodity prices is of course good news for some developing economies.

India is in the midst of a sharp economic rebound, although high inflation and rising oil prices could crimp growth if they prove persistent. Brazil is experiencing a modest growth revival but remains beset by political instability. The Russian economy has been hammered by a combination of trade, financial, and technological sanctions. This will not directly impact global growth, as Russia accounts for barely 2 percent of global GDP, although the country’s importance as a commodity exporter adds to price pressures that in turn affect other countries’ central banks’ room for maneuver.

Policymakers have a daunting and high-stakes balancing act ahead of them. In most economies, monetary policy is constrained by inflationary pressures while fiscal policy is limited by high levels of public debt. Keeping the global economy on a reasonable growth track will require concerted actions to fix the root problems, including measures to limit pandemic-induced disruptions, steps to tamp down geopolitical tensions, and targeted measures such as infrastructure spending to boost long-term productivity rather than just fortify short-term demand. This will take strong domestic political will and concerted international cooperation, both of which remain in depressingly short supply.

What U.S. policymakers can learn from the U.K.’s Online Safety Bill

Are Democrats Going to Dump Biden?