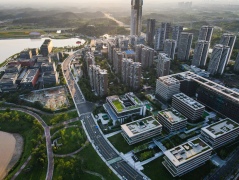 Overseas research and development conducted by U.S. multinational corporations has grown nearly four-fold in the last two decades, and much of that growth has been in developing economies. Britta Glennon, an assistant professor in the Wharton School of Business at the University of Pennsylvania, joins David Dollar in this episode to explain what’s behind this growth and which countries have become new hubs for R&D investments. Glennon and Dollar also discuss the national security implications of this trend and what it signals about the likelihood of any decoupling between the U.S. and China.

DAVID DOLLAR: Hi, I’m David Dollar, host of the Brookings trade podcast Dollar and Sense. Today, my guest is Britta Glennon, a professor at the Wharton School at the University of Pennsylvania. The Economic Studies wing of Brookings recently published a book on the role of multinational corporations in today’s world called “Global Goliaths.” Britta coauthored a chapter called “The New Global Invention Machine” about the internationalization of research and development. It’s a topic I found really fascinating, and that’s what we’re going to discuss today. So thank you for joining the show, Britta.

BRITTA GLENNON: Thanks so much for having me.

DOLLAR: So traditionally multinational corporations, particularly U.S. MNCs, did their research and development at home. But you show in your study that’s changing. So what is this new pattern that is emerging?

GLENNON: Yes, so there’s a few pieces to this. The first is just that there’s been really significant growth in the amount of R&D that U.S. multinational firms are doing abroad. So this has grown four-fold since the mid-1990s. I do want to be clear that they do still conduct the majority of their R&D at home. It’s something like 83 percent currently, but that’s down from 95 percent or so in the early 1990s, and in some sectors this is even more staggering. In professional services, for example, 40 percent of R&D is now abroad. But regardless of how you cut it, there’s really been a massive increase in R&D spending by U.S. multinational firms outside the U.S.

The second piece of this is that it’s not just that there’s been an increase, but also there’s been a pretty dramatic change in the location, or the footprint, of foreign R&D. In 1989, U.S. multinationals did 74 percent of all of their foreign R&D in just five countries. So the UK, Germany, France, Japan, and Canada. Now, only 43 percent of all foreign R&D is being done in those five countries. In other words, U.S. multinational firms are doing foreign R&D in many, many more countries than before. Then if you take a closer look at all of these new locations, we call them new hubs in our chapter, a lot of them are actually in emerging economies. And what’s kind of surprising about that is that this kind of challenges the way we traditionally think of comparative advantage.

Economists and management scholars have long thought that one of the main reasons why multinational firms do R&D abroad is actually to learn. So if you are a car manufacturer, you want to go to Germany and do R&D there and learn from kind of some of the top car companies in the world. Now, this change in location to emerging markets seems to challenge that idea.

Then the third piece of this new pattern is just that there’s really rapid growth in cross-border collaboration. So, in other words, we are seeing that multinational subsidiaries aren’t acting independently. There’s a lot of collaboration between subsidiaries and between the subsidiaries and the parent. So what you are seeing is kind of these global innovation teams within the multinational firm—this kind of network of R&D performing affiliates working with headquarters. So all of this is new. These are trends that were not really present 30 years ago.

Recovering the Path to Manhood