Rising to the challenge: Navigating competition, avoiding crisis, and advancing US interests in relations with China 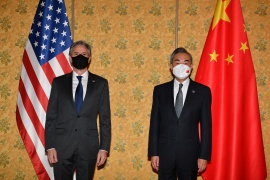 The Brookings – China Institutes of Contemporary International Relations (CICIR) Dialogue began in 2019 against the backdrop of the 40th anniversary of the establishment of U.S.-China diplomatic relations. By that time, it already had become clear that the previous framework for managing bilateral relations was fraying, and that a form of strategic rivalry was the new baseline reality of the relationship.

In the intervening two years, American policymakers and analysts have laid out two main alternative frameworks for the management of U.S.-China relations for the coming decades. One is a strategy of omni-directional containment, seeking to confront and constrain China — limiting China’s expanding capacity in the military, technological, economic, developmental, normative, and multilateral spheres; undermining the legitimacy of its governance and economic models; and seeking to blunt China’s diplomatic gains. Although there is a coherence to this approach, it also carries costs and risks. It could limit buy-in from key allies and partners, inhibit calibrated U.S.-China coordination on the provision of critical global public goods, and diminish the capacity of both major powers to manage tensions. As an alternative, some voices in the United States have argued for a return to a variation of the preTrump administration status quo, where an effort to secure cooperation on global issues like climate change is prioritized alongside efforts to expand access to the Chinese market.

For any version of this more benign approach to be realistic, however, would require not simply a shift in American policy and perspective but a fundamental change in Chinese behavior, both external and internal. There is little evidence to suggest that China is prepared to embark on any major reorientation of its domestic and foreign policies in the near term.

To maximize its ability to influence how China pursues its interests, the United States will need to advance a strategy that is capable of securing both long-term allied participation and sustained support from the U.S. public and key political constituencies. Our conclusion is that a concept of persistent competition leavened with calibrated cooperation holds the greatest promise of sustaining support at home and with allies and partners.

A framework for managing the relationship in ensuing decades could start with the following principles:

The following report lays out the elements such a framework that can help minimize risk of conflict, push both Beijing and Washington to recognize the merits of bounding and managing competition, and enable both sides to pursue calibrated coordination on shared challenges.