Hutchinson & the Real Lie Behind this Latest Scam 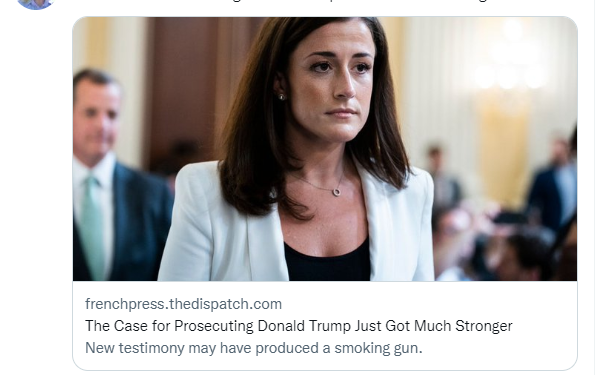 It is very curious that Cassidy Hutchenson is testifying to what would be considered inadmissible evidence in a court of law. She has said that President Donald Trump was so irate that his Secret Service detail wouldn’t take him to the Capitol on Jan. 6 that he tried to grab the wheel of the armored limousine, then attacked one of the agents, according to testimony from a top former White House aide. This is HEARSAY and this political agenda of January 6th is a kangaroo court in its grand sense.

The entire object here is to claim January 6th was an armed insurrection so they can constitutionally prevent Trump from running again. This so-called “evidence” from Cassidy Hutchenson would NEVER be allowed in any court of law. The only person who could give such evidence would be the Secret Service agent. It must be someone with personal knowledge. Hutchenson has ruined her career for who would hire her fearing she could testify against her boss and makes up anything.

A proper constitutional investigation would be to take Hutchinson’s statement, identify the Secret Service agent, and then subpoena him to the stand. The fact that they never contacted the Secret Service raises a HUGE red flag that they are simply trying to poison the minds of everyone, knowing that this is NOT acceptable evidence in a court of law.

This is like a disgruntled neighbor calling the cops saying they “think” you killed your spouse because they have not seen them for a week when they are merely out of town. I have deep concerns that now Hutchinson may have been offered something in return for this testimony. Liz Cheney’s father created the Iraq War on fake information, killing millions of people, and was responsible for the rise of ISIS. Now she is claiming falsely that “the case for prosecuting Donald Trump just got much stronger.” She is NOT stupid. She is an American attorney and therefore knows that HEARSAY is not acceptable in any court in the world. She is DELIBERATELY lying to the public to prevent Trump from ever running for president.

I hope Wyoming just moves West and joins California, for hopefully they will secede from the Union, and I will cheer – good riddance! This is not about the rule of law. This is about oppression. The Justice Department is trying to give people who were just there taking a selfie five years in prison.

The post Hutchinson & the Real Lie Behind this Latest Scam first appeared on Armstrong Economics.

Weekly Initial Claims Tick Up but Remain Near Record Lows