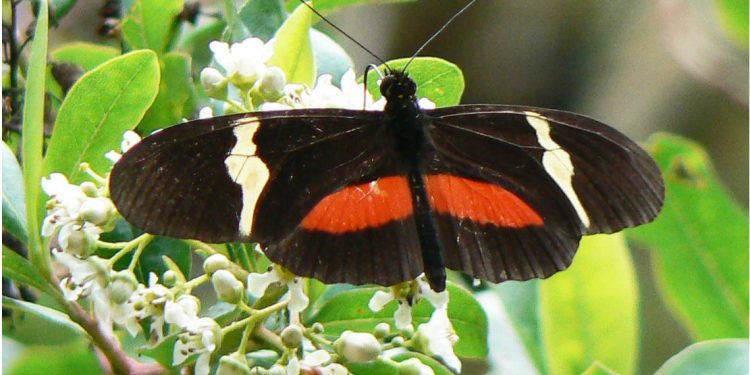 Have you ever noticed that bumblebees usually share similar colours and patterns or that some hoverflies and moths look like wasps? You are witnessing examples of defensive mimicry: some species resemble the colouration and patterns of other species to obtain protection from predators. Let me tell you a short story about why mimicry is so much more than what we can see.

Our research focuses on understanding how certain species of damselflies (the more delicate relative group to dragonflies) are capable of mimicking butterflies by resembling the ultraviolet colours and even flight style! Before we start, let me give you a quick overview of how important mimicry is in butterflies, especially in the tropics. Heliconians are probably the most famous neotropical (central and south American) toxic butterflies. You do not need to travel to the tropics to see them since they are normally bred in captivity in most butterfly houses.

One example of a heliconian butterfly depicting the conspicuous warning colourations. Image by David Outomuro

Heliconians normally have very vibrant colours and patterns and participate in complex examples of mimicry. These conspicuous warning colorations are commonly called aposematic. When unpalatable species mimic each other, i.e., they are co-mimics, this relationship is known as Müllerian mimicry. However, evolution works very selfishly, and some palatable species have evolved to mimic unpalatable model species. This relationship is known as Batesian mimicry, and it could be considered parasitic since the mimic is not contributing to predator education as the model does. Our research organism is slightly less famous than the heliconians but still beautiful and delicate in appearance: neotropical butterflies of the tribe Ithomiini, also known as clearwing or glasswing butterflies.

These butterflies are unpalatable to their main predators, birds, since they accumulate pyrrolizidine alkaloids in their bodies. These alkaloids are naturally produced plant defenses against herbivory. While most adult heliconians obtain their toxic compounds from their diet as caterpillars, glasswing butterflies normally obtain their alkaloids at the adult stage, by feeding on nectar and sap. Ithomiini is probably the second most important neotropical group of butterflies in terms of mimicry. For example, up to eight mimicry rings have been observed in Ecuador, involving not only glasswing butterflies, but also other groups of butterflies, moths, and even one species of damselfly. But how is it possible that a damselfly would be mimicking a toxic butterfly?

Two examples of glasswing butterflies from the study area in Colombia. Note the white wing patch. Photo by David Outomuro

This question is what brought us here today. First of all, there were no known species of damselflies or dragonflies that were considered to be mimics. Moreover, there are no known unpalatable species of damselflies or dragonflies, suggesting that if this mimicry case was confirmed, we would be studying a case of Batesian mimicry. Back in 2015, we started investigating a mimicry study system in the Colombian Andean cloud forest: a couple of species of damselflies of the family Polythoridae (also exclusively from the neotropics) that had been suggested to mimic glasswing butterflies. These animals share a white wing patch, which had been hypothesized to be the aposematic color signal that alerts predators of possible unpalatable organisms. Importantly, in butterflies this white patch reflects ultraviolet light, which is perceived both by insects and birds, but not by humans. Moreover, to untrained human observers, these butterflies and damselflies seem to fly quite alike (keep in mind that they are very distantly related groups). Are damselflies mimicking both colour and flight of the model butterflies?

A male Euthore fasciata, one of the damselflies that presumably mimic glasswing butterflies. Note the large white wing patch.

In our research, we found that the white wing patches of both butterflies and damselflies had a very strong ultraviolet component. While butterflies produced this colour thanks to the microstructure of certain wing scales, damselflies, however, overconcentrate wax filaments on their wings.

These waxes are generally present at smaller densities in most species of damselflies and dragonflies, offering a waterproofing layer. However, our damselflies have increased the thickness of the layer and the size of the wax filaments where the white wing patch is located. The white wing patches were also found to be perceived as similar by birds (using mathematical models that estimate colour perception), adding more evidence to the use of this trait as an aposematic signal. We also studied bird predation in the field, using replicas of butterflies and damselflies. These replicas had a plasticine body and plastic wings covered in wax. You can count the bird predation attempts because birds leave V-shaped marks on the plasticine and wax of the replicas. The replicas without any white patch were the most attacked by birds, while the replicas with ultraviolet reflecting white patches were the least attacked, confirming our hypothesis that the white patch is indeed an aposematic signal that guides bird predation decisions. What makes this system even more interesting is that the ultraviolet-reflective wing patches are relatively uncommon in butterflies, and that aposematic colours in animals are usually based on yellow, orange and red.

Damselfly replica with a V-shaped mark on the plasticine body as a result of an attempt of “predation” by a bird. Image by David Outomuro

We also studied linear flight of these animals within a long mesh tube and found that butterflies and damselflies largely overlap in wing-beat frequency (how many times they flap their wings per unit of time), and partially in flight speed. We then went back to the forest and set up a large field insectarium where we recorded the flight of butterflies and damselflies using three simultaneous cameras. Although we are still analysing the data obtained, it seems that mimic damselflies show similarities to model butterflies in flight trajectory (e.g., sinuosity, acceleration, speed), especially for female damselflies. Female damselflies are considered “poorer” mimics, since they do not have as much white pigmentation. Are they compensating the less accurate colour mimicry by resembling more their flight style?

We will need further research to answer that question. I hope you now appreciate more Polythoridae damselflies and glasswing butterflies, a fascinating example that illustrates the complexity of natural selection, where mimicry targets colour vision channels out of reach for the human eye, and possibly extends not only to colour, but also to flight.

Winning the web: How Beijing exploits search results to shape views of Xinjiang and COVID-19

Fixing the climate crisis will require local experimentation and solutions