From COVID-19 to culture wars: The growing hostility of education politics 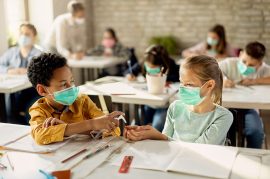 On Dec. 9, 2021, the Brown Center on Education Policy at Brookings hosted an expert discussion on the politics of education. Panelists discussed recent events and what they mean for students, schools, and society, as well as how education might factor into the 2022 elections.

Jon Valant, director of the Brown Center on Education Policy, moderated the discussion. He opened by inviting Lauren Camera, a senior education writer at U.S. News and World Report, to set the stage by describing the current state of affairs and how it compares to what preceded it.

Camera noted that the “major pressure points that you are seeing in education right now already existed,” but the pandemic intensified those pressure points and brought attention to problems that had been well known to the education community. She described a confluence of stressors—remote learning, a decline in student outcomes, a highly charged political environment, a national reckoning with racism and inequality, and COVID-19 fatigue—as producing a “boiling-over moment.” Today, Americans find themselves on opposing sides of many issues in education, and the decentralized nature of education governance means that these debates are playing out in different ways all across the country.

Martin West, academic dean and professor of education at Harvard University’s Graduate School of Education, described polling that he has analyzed through the Education Next Survey of Public Opinion. While parents in the survey did express concerns about “learning and mental health,” they reported being satisfied overall with their children’s schools. West sees the polling as surprisingly stable through the onset of the pandemic, at least relative to narratives of widespread unrest. He described himself as “a little bit skeptical of claims that the pandemic has brought about a fundamental shift on public opinion in education”—and of claims that education was decisive in last month’s Virginia gubernatorial race.

Jonathan Collins, assistant professor of education and international and public affairs at Brown University, sees value in public debate—but only when the debates are grounded in facts and evidence. On many topics, Collins argues, that has not been the case. For example, public discussions of COVID-19 and critical race theory have been weighed down by conspiracy theories and misinformation, while discussions about gender identity have paid too little attention to the vulnerability of transgender students. He worries that there is “too much distance between the most pertinent evidence on a policy-related issue compared to the actual debates that are materializing.”

Valant then turned the conversation to school boards and referenced a study by Collins that explores whether Americans actually want school boards as the governing body of local education. Collins said that, for all of the problems we see in school boards, most Americans ultimately prefer the local school-board model to alternate forms of government control. Working in their favor, school boards offer an opportunity for “the everyday parent to have access to the policy decision-making process” around issues that matter to people. Still, the reality of many school-board meetings is that they are mundane and procedure-driven, and when people do engage with school boards—as they are now—it’s often not in healthy, productive ways. Collins sees allure in what school boards can be, and perhaps should be, though school boards often have not fulfilled that promise.

West weighed in on school boards, noting that our model for electing school-board members is largely designed to “limit electoral participation in school board elections.” He cited a series of reforms at the beginning of the 20th century—such as moving school-board election dates off the state and national election cycle and making offices nonpartisan—as drivers of very low turnout. On top of that, those who vote are often not demographically representative of their communities and students. West says he shares Collins’ desire to reinvigorate school-board governance, but worries about problems within the school-board governance model and whether today’s boards are truly vehicles of representative local control.

Camera noted that the current conversations about school boards and disruptions in school-board meetings could exacerbate the problems that West flagged by discouraging even more people from voting in these elections.

To finish the conversation, Camera suggested that the push and pull between administrators, teachers unions, and parents will be something to watch. West said that he believes that education systems are resistant to change and sees these current issues in the politics of education more as a “blip” than a “tectonic shift.”