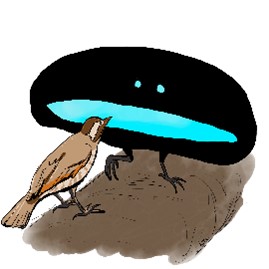 Dakota E. McCoy of Harvard University dazzles us with a tale of showy creatures and the complex world of ultra black colouration.

Pop quiz: you are a male bird trying to find a mate. You know females love bright colours, but you’ve already made your blue feathers as bright as possible. What do you do to make yourself stand out? HINT: use the power of illusion! Many male birds and spiders convergently evolved “super black” patches, an optical illusion that makes nearby colours appear impossibly bright (as if they are glowing). To achieve the darkest possible black, these creatures rely on a variety of intricate structures that manipulate light. Read on to learn how super black works in different species, what it tells us about the evolution of beauty, and how we humans may be able to improve our solar power technology by mimicking these antireflective animals.

Birds-of-paradise, native to the montane jungles of New Guinea, are perhaps the most bizarre suitors on earth. Ornate males perform elaborate mating dances for comparatively drab females. Some early European explorers thought they were winged visitors from paradise who spent their entire life in the sky. Female birds-of-paradise have high standards, and only a small percentage of males successfully mate. Over millions of years of intense sexual selection, birds-of-paradise evolved finely-tuned optical adaptations which are the envy of human engineers. In general, sexually-selected male birds are brightly coloured; however, many bird-of-paradise species have black feathers surrounding their bright colours, so dark that they appear to be a dimensionless black hole. My colleagues and I, giving in to curiosity, decided to investigate this mysterious black colour.

Male birds-of-paradise evolved bizarre, 3D feather structures that eliminate nearly all reflections from a feather surface. The feathers act as light traps, bouncing photons within the structures until as much as 99.95% of incoming light can be absorbed. Remarkably, super black feathers still appear super black even when coated with a thin layer of gold particles (Figure, right). This shows that the ultra-black colour arises from micro-scale surface structure rather than internal pigments alone. Apart from birds-of-paradise, super black evolved convergently at least 15 times in birds alone, each time with subtly different microstructural features.

Across a narrow stretch of ocean from our New Guinean birds, tiny spiders recreate the birds’ mating dances in miniature. Peacock spiders live in Australia, charming humans with their elaborate mating dances, huge eyes, and brilliant colours. Peacock spider males are masters of optical design, from vivid blue scales to microscopic rainbows on their abdomens. Just like the distantly-related birds-of-par­adise, males invest massive time and energy into elaborate mating dancing for selective females. Only a few males get to mate, and they are highly incentivised to outcompete their peers. Amazingly, peacock spiders—the ecological analogue of birds-of-paradise—also evolved super black near brilliant colour.

Peacock spiders produce super black colour due to many tiny bumps termed “microlens arrays” which focus light onto melanin pigments within their cuticle. On top of the microlens arrays, some males also evolved brush-like scales which multiply scatter and absorb light (akin to a bird-of-paradise feather). The microlenses of super black cuticle in peacock spiders bear a striking resemblance to anti-reflective ornaments in other organisms — including flower petals, tropical shade plant leaves, light-sensitive brittle star arms, and moth eyes. In other words, evolution has produced microlens arrays many times—a strong signal that they are optimal for decreasing reflection.

What does the convergent evolution of super black in birds and spiders tell us about the evolution of beauty? Both birds-of-paradise and peacock spiders have precise colour vision, colourful male displays, and intense sexual selection; both evolved broadband, featureless black colour near their bright colours. We propose that super black is an evolved optical illusion to make colours appear brighter. Once a displaying male has already made the brightest possible blue feather, he can outcompete his peers by adding a super black frame: nearby colours appear impossibly bright, or even glowing. The illusion works because eyes and brains control for ambient lighting. A bright red apple looks equally red in sunlight or in shade. Super black hijacks this innate sensory control system, creating the illusion that bright blue feathers are so blue “in the shade.” Apparently, colour vision, which evolved separately in birds and spiders, has a fundamental sensory bias which can be exploited by super black.

Super black, in animals, is a remarkable natural technology which can inspire new improvements to solar panels. These birds and spiders evolved efficient, tough structures that reflect nearly 0% of light and remain useful across many habitats and weather conditions (requirements for solar panel design). Further, the particular size and shape of peacock spider microlenses is optimally tuned to a balance between (i) enhancing melanin absorption and (ii) decreasing surface reflectance (goals for solar panel design). Based on these super black spiders’ structures, engineers have already designed new solar-harnessing structures to decrease light reflectance and enhance power output —and further work may generate new applications to optics, thermal technology, and more.

All of these super black animals are the result of 3.5 billion years of life experimenting, adapting, and evolving. Nature is a near-endless source of innovation and a captivating font of mysteries—and there is still so much more to learn.

Did We Need Operation Warp Speed?