Biden’s Africa strategy seeks to revitalize ties with the continent 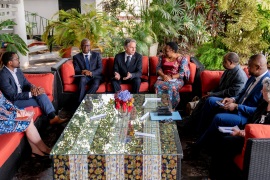 President Biden is delivering on his commitment to make Africa a priority for the United States.

Most notable is his administration’s sharp uptick in U.S. diplomacy toward the region. With visits to Kenya, Nigeria, and Senegal last November, Morocco and Algeria in March, and South Africa, the Democratic Republic of the Congo, and Rwanda this month, Secretary of State Antony Blinken has visited the continent three times in just 10 months. This frequency of outreach is a first for any U.S. cabinet official, let alone a secretary of state and represents a more hands-on approach from the Biden administration. Indeed, one tangible outcome of Blinken’s most recent visit was an agreement between the presidents of Rwanda and the Democratic Republic of the Congo to initiate direct communications aimed at ending tensions in eastern Congo.

The U.S.–Africa Leaders Summit in December will be a critical steppingstone to delivering on the Biden vision of a revitalized relationship that is at the core of the new Africa strategy.

Blinken is not alone in this diplomatic upswing. A number of senior officials have engaged their counterparts this year across the continent on various issues ranging from counterterrorism to climate change, food security, strategic minerals, democratic governance, and human rights. The announcement last month by Vice President Kamala Harris that the administration will convene the second Africa Leaders Summit in Washington on December 13-15, has further energized this process.

As Blinken landed in South Africa, the White House released its promised U.S. strategy toward sub-Saharan Africa, which has been in the making for nearly nine months. The Biden Africa strategy seeks to affirm an “African agency” and work toward a more “flexible regional architecture,” which is a welcome paradigm shift from the previous administration. Indeed, as the new approach notes, the U.S. “must reset its relations with African counterparts, listen to diverse local voices, and widen the circle of engagement to advance its strategic objectives to the benefit of both African and Americans.” If acted on and sustained, this approach could substantially deepen ties with African governments and other stake–holders on the continent.

Moving away from the Cold War

In contrast with the Trump administration’s approach to the region, which largely saw the continent as a “great power” battleground between Russia, China, and the United States, the Biden approach is considerably more balanced and recognizes that Africans live increasingly globalized lives. China’s mercantilist approach to the continent is rightly criticized, as is Russia’s efforts to foment instability for its strategic and financial benefit. In support of common objectives that Africans regard as integral to their national security, the Biden administration understands the importance of working multilaterally with its partners from Europe, the Middle East, and the Indo-Pacific. Yet, there are few details about how the administration might work toward a new, more flexible regional architecture.

The first pillar, fostering openness and open societies, commits the United States to working with its African partners to transparently leverage natural resources, combat digital authoritarianism, and strengthen independent judiciaries, among other priorities.

The second pillar, delivering democratic and security dividends, underscores the linkage between poor governance, corruption, human rights abuses, and the growing influence of malign actors. This pillar reflects enduring U.S. priorities when it comes to democracy promotion, and conflict mitigation and prevention, which the administration emphasizes will be done in tandem with African governments, regional bodies, and civil society groups. Enhancing democracy and security remains a significant challenge as the strategy notes, given the instability in the Sahel and the fact that there are only eight countries in sub-Saharan Africa that Freedom House regards as free, which is the fewest since 1991.

The third pillar, advancing pandemic recovery and economic opportunity, focuses on enabling African countries to sustainably recover from COVID-19 and mitigate its economic and social consequences. Hopefully, this pillar will also focus on strengthening Africa’s health care system in the long term.

The importance of the private sector is implicit throughout the Biden Africa strategy, but it could have been more pronounced. Indeed, the fact that the U.S. government has helped to close 800 deals across 45 countries for an estimated value of $50 billion in exports and investments over the last three years, according to Prosper Africa, challenges the perception that the U.S. is not commercially engaged on the continent. Now, U.S. companies and leaders across Africa are interested to know more about the Biden game plan for building on this success. Importantly, an Africa Business Forum will be part of the Africa Leaders Summit. The strategy also highlights the administration’s support for the implementation of the African Continental Free Trade Agreement and working with Congress “on the future” of African Growth and Opportunity Act (AGOA).

When it comes to commercial and economic diplomacy, the Biden administration’s strategy frames its priorities around pandemic preparedness and leveraging different financing mechanisms to support country goals. The inclusion of conservation, climate adaptation, and a just energy transition is also a key difference and may help to differentiate the strategy from less favorable development models.

The Biden strategy notes that there has been bipartisan support for a deeper U.S. engagement in Africa for three decades. Such collaboration has led to a host of programs, such as AGOA, the President’s Emergency Plan for AIDS Relief, the Millennium Challenge Corporation, Power Africa, Feed the Future and, most recently, the creation of the U.S. Development Finance Corporation. The Biden administration is well positioned to build on this legacy and renew the momentum of engagement that was lost with the previous administration.

The U.S.–Africa Leaders Summit in December will be a critical steppingstone to delivering on the Biden vision of a revitalized relationship that is at the core of the new Africa strategy. Indeed, as Blinken said in Senegal last November and recently repeated at the University of Pretoria in describing the Biden strategy to the region, Africa “shaped our past, is shaping our present, and will shape our future.” The question remains about whether the summit will be a one-off or a further steppingstone to a new era of sustained engagement with the continent.

The FTC ups the ante for federal privacy legislation

Africa and the future of digital diplomacy

Durable-goods Orders Remained Strong in May