Can the abortion issue save Democrats in the 2022 midterm elections? 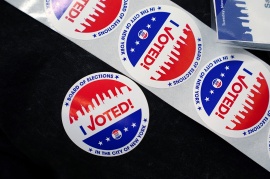 Ever since June 24, 2022, when the Supreme Court issued a ruling overturning the right to abortion, people have been trying to predict its impact on the upcoming midterm elections. Polling data offer some clues; Gallup found that the number of Americans identifying themselves as pro-choice rose to a near record high in the aftermath of the Court’s decision.

But trying to determine whether the abortion decision will affect voters’ decisions about individual candidates is pretty complicated. Throughout this year the big issues driving the election have included not just abortion but also inflation, gun control, and now, according to a recent NBC poll, “threats to democracy.”

The polls offer no clear picture of what might happen in head-to-head races between Democrats and Republicans in November.

This year’s elections have been mostly party primaries which also offer no clue as to how the abortion issue might affect the midterms. The two parties are so very clearly divided on this issue, that almost all the Republican candidates are in favor of the Court’s decision and almost all the Democratic candidates are against it. However, in the months since the Supreme Court’s decision, we have had four special elections which pit Democrats against Republicans. In Minnesota’s 1st congressional district (MN-01), a special election was called to fill the vacancy created by the death of U.S. Rep. Jim Hagedorn. In Nebraska’s 1st congressional district (NE-01), the seat became vacant after the resignation of incumbent Republican Rep. Jeff Fortenberry who was indicted on campaign finance charges. In New York’s 19th congressional district (NY-19), a vacancy was created by the resignation of Democrat Antonio Delgado, who became New York’s lieutenant governor. And in New York’s 23rd congressional district (NY-23), the Republican Tom Reed resigned after sexual harassment allegations.

Although special elections are generally low turnout affairs, we can compare the performance of the Democrats and Republicans in these four races to past performance of candidates of their parties and to the performance of Biden and Trump in the 2020 presidential race to see if there is a pattern developing.

Let’s start with the special election in NE-01, held four days after the Supreme Court’s decision. In that race the Republican emphasized his sponsorship of a law that banned abortion after 20 weeks, while the Democrat criticized the Dobbs decision and emphasized her support for abortion rights. As the following chart shows, while the Democratic candidate, Patty Pansing Brooks, lost, she outperformed the last Democrat to run in a midterm by 7.7% in a very Republican district and she outperformed the Democratic candidate in 2020 by 9.7%. She also did better than Biden did—outperforming him by 6.2%.

MN-01’s special election was held on August 9, 2022. In that election the Republican Brad Finstad ran as a clear opponent of abortion while the Democrat, Jeff Ettinger, ran as a pro-choice candidate with the backing of Minnesota Senator Amy Klobuchar. But Ettinger ran behind the Democrat who ran in the last midterm election and only slightly ahead of the Democrat who ran in 2020. But he did run 2.9% ahead of Joe Biden’s numbers in 2020.

In New York on August 23, there were two special elections—one in a swing district and one in a very Republican district. In NY-19, the swing district, the race turned into a very clear cut battle over abortion rights. The Democrat, Pat Ryan, won a narrow victory there—almost reaching the vote of the Democrat who ran in 2018 and exceeding the vote of the Democrat in 2020. In addition, Ryan ran 1.3% ahead of Biden in 2020.

A few things stand out in these four early tests. First, in each one of these districts (three of which were Republican districts and one an evenly matched district) the Democratic candidate in 2022 outperformed Joe Biden in 2020 and the Republican candidate underperformed Trump. Second, in the two races where the abortion issue seemed to stand out, NE-01 and NY-19, the Democrat did well—winning narrowly in NY-19 and losing but dramatically improving Democratic performance in NE-01.

What does this all mean?

As of August 10, the Cook Political Report had 25 Democratic seats in the toss up category and 8 Republican seats in the toss up category. Control of the House may still end up in Republican hands, but to see what may be coming down the pike politicians look at margins in addition to winners and losers. In these special contests the Republican margins shrank and most of the Democratic margins grew. November is looking a little less grim for the Democratic Party today than it did a few months ago and as these races show, the abortion decision may be having a major role in the change.

“Great people of a great country!”: How the Ukrainian Military Serves at Checkpoints

How do rapid shifts in body size influence population dynamics?