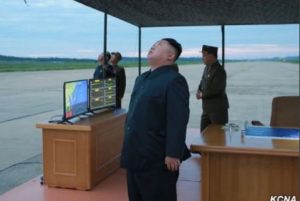 On Korea’s liberation day, President Vladimir Putin responded to Kim Jong-Un’s request to join the fight in Ukraine. In a letter to the North Korean dictator, Putin said North Korea had been a friend to Russia since Japan’s defeat during World War II. Kim is calling for “strategic and tactical cooperation, support and solidarity” between the two nations, and Vladimir agrees that it would be in the best interest of both parties.

Putin is seeking to “expand the comprehensive and constructive bilateral relations with common efforts” with the hermit kingdom. North Korea needs Russia and China to survive. In 2011, Kim J0ng-Un’s father, Kim Jong-il, visited Russia and negotiated a contract to send North Korean workers to Russia. US sanctions were intended to reverse this proposal but it was largely ignored. Both Russia and North Korea have been banished from doing business with the West entirely, so all bets are off.

This arrangement is certainly more beneficial for North Korea as it is desperate for allies. The move will undoubtedly anger the West, but this is the result of failing to hold diplomatic talks with Russia and imposing endless sanctions.