What drives increases in state funding for education? 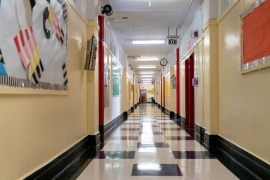 We’ve been working to understand what drives major changes in state-level investments in education. In the recent school finance literature, there is generally little description of the diverse ways states intervene to increase elementary-secondary revenues. Many studies published in the past decade have focused on the courts, and though the courts are important (as we describe below), they cannot be the most proximal catalyst for reform: they cannot raise taxes or write budgets. Further, legislatures vary in how quickly they react to court rulings (if at all). And in many cases, legislation is passed without rulings, sometimes because of the threat of a suit or just because the state government sought change. All this nuance and heterogeneity has been missing from discussions about school finance reform. We sought to provide such nuance and rich description.

While many states have steadily increased their investments in education over time, others have abruptly and dramatically increased state contributions. Figure 1 depicts examples of these abrupt “change points” in state educational investments. It shows state revenues per pupil in Michigan and New Hampshire from 1960 to 2008, along with a (much smoother) national trend line for context. Michigan, in green, experienced a changepoint in 1995, with state spending per pupil more than doubling. New Hampshire, in red, experienced a changepoint in 2000, with state spending increasing by a factor of five.

In a new working paper, we study these abrupt changes—or change points—to state educational investments. We are interested in change points because they likely represent policies adopted by state legislatures to reform their education finance systems, often in the pursuit of equity. Moreover, documenting the diversity of events leading up to change points can have implications for future policymaking and advocacy.

Using a change point estimator and newly digitized state-level finance data, we identify change point events for all states from 1960 to 2008. Essentially, this estimator uses a statistical algorithm to identify specific years in which a state’s education revenues abruptly changed. We exclude years beyond 2008, as they are affected by the Great Recession. Once these change points have been detected statistically, we focus on the years 1990 to 2008 and conduct an archival search to identify legislative statutes giving rise to these events, as well as other state policy factors preceding statutes and change points. The period in which we conduct our archival search is often referred to as the “adequacy era” because lawsuits filed against states based their arguments on a state’s constitutional requirement to provide an adequate or sufficient education, as opposed to an equal one.

Previous school finance reform studies generally focused on high-court decisions that overturned a state’s funding formula. In contrast, our study develops a more comprehensive list of legislative activities and reforms to state education finance systems. We show that court involvement is relevant in some states but not in others. The full range of events that affect change in school finance is, we believe, generally underrecognized and understudied.

To conduct our search, we first looked for legislative statutes that preceded change points by no more than five years. In four states (Nevada, Oklahoma, Pennsylvania, and Maine), we could not identify statutes, and in New Mexico, where state education revenues increased more gradually, we identified legislative events following the change point. We then supplemented our search to document additional events preceding both the change points and the identified legislative statutes. Figure 2 summarizes the results of this search process and displays the sequence of key events—legislative acts, court activities, constitutional amendments, or resource shocks—preceding each change point.

By generating this more comprehensive set of events, we start to see some patterns, visible in Figure 2. First, state-level education finance reforms occur through a diverse set of processes. For states like Kentucky, a suit was filed, and a statute was passed one year prior to the identified change point. For states like Ohio and Texas, a change point is preceded by multiple lawsuits and minor legislative changes. In other states, such as West Virginia, North Carolina, and Virginia (among others), a single statute is passed immediately prior to a change point. In sum, the paths states undertake before arriving at change points are varied.

While there are differences among the states, we also observe many commonalities among them. First, in the adequacy era, 35 states experienced a change point, meaning that despite the diversity of processes, 70 percent of states experienced a school finance reform in this era. Further, these change points, on average, increased state education revenues by about $900 per pupil. That’s an increase of about six percent of average total revenues per pupil and an increase of about 12 percent of average state revenues per pupil.

In many states, juridical persuasion catalyzes the initial stages of finance reform. For instance, based on the results of our archival search, which was restricted to states with change points, 20 of the 35 states with a change point had at least one lawsuit, and when a state experienced a lawsuit, the probability of a school finance statute occurring increased by 50 percentage points.

The results from this paper have “half full” and “half empty” interpretations. Pessimistically, a plausible interpretation of these data is that many states with change points have not initiated these reforms without prompting from the courts. And because the courts do not rule unless a suit is brought before them, we conclude that stakeholders and activists are ultimately the catalysts for reform in many cases. Therefore, as state budgets recede during fiscal crises, like they did during the Great Recession and COVID-19 pandemic, these same stakeholders and activists must be vigilant, as we should not assume public elementary-secondary education spending will return to pre-crisis levels without pressure from external stakeholders.

Optimistically, the results of this study demonstrate much greater state investment in the public educational system than has been previously documented. We identify more states with change points and, using this more complete list, larger effect sizes from change points relative to existing literature that relied almost exclusively on court rulings. Because state revenues are so important for equalizing educational opportunities—or, at a minimum, providing a guaranteed level of spending for all students—these results indicate that states have not backed away from their educational commitments, especially since 1990.

We also see something of a roadmap for those interested in creating change. Lawsuits brought about by activists and stakeholders are necessary antecedents for the courts to rule, and the courts, in turn, are a catalyst of legislative action in many cases.

At the same time, the courts are only one step towards change. Ultimately, it is the legislature that is responsible for raising taxes, appropriating revenues, and establishing funding formulas. Our current understanding of what prompts legislatures to act outside of court mandates is limited. The economic conditions, relationships with teacher unions, and political party dynamics are all likely important contextual factors that give rise to legislation and would be worthy of further study.

Fireside chat with Superintendent Adrienne A. Harris of the New York Department of Financial Services

Inflation Creating Cracks in the G7