The end of Roe creates new challenges in higher education 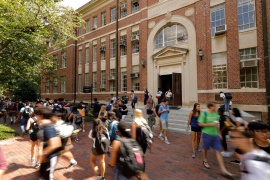 The recent Dobbs decision by the Supreme Court, which overturned half a century of abortion rights, will affect wide areas of society, and higher education will be no exception. The impacts on higher education will fall into (at least) five areas: reduced college enrollment, particularly for Black women; disruption of training in medical schools; changes in on-campus student health services; reductions in out-of-state enrollment in anti-abortion states; and shifts in faculty location decisions away from anti-abortion states. For some of these issues, existing research provides a useful guide to likely outcomes. Other outcomes will take time to unfold and depend on how anti-abortion restrictions and enforcement evolve in individual states, but informed guesses are possible.

There is very solid evidence that restricting abortion reduces educational achievement for women, at least for Black women. As part of the Dobbs case, 154 economists filed a Brief of Amici Curiae that summarizes economic research findings on the effects of abortion availability and that reads in part:

One study finds that recent targeted restrictions by states that reduced access to abortion for women under the age of 18 reduced college enrollment and completion for Black women by one to three percentage points. Presumably, the elimination of most abortions will have a much larger impact, though the availability of medicinal abortion may provide alternative routes for some. Other research looking at the effect of allowing minors access to abortion without parental notification shows large positive effects on college graduation rates for Black women, who tend to have higher levels of unmet need for contraception than white women.

Some part of college enrollment shifts is due to avoiding unwanted births that make attending college difficult or impossible; some part also appears to be due to women with greater access to abortion and control over fertility timing choosing to make larger investments in human capital. Evidence from the pre-Roe period shows that young women’s access to abortion—even more than access to contraception—allowed women to delay marriage and motherhood.

Disruption of training in medical schools

Turning to the question of training in medical schools, the response to abortion restrictions is just beginning to be worked out. The response of universities is complicated both by the fact that standards for medical training are national and by the fact that some medical schools supply cross-state training. Roughly 44 percent of obstetrics and gynecology residents are in states where abortion training is likely to be restricted. Standards for training in this field are set by the Accreditation Council for Graduate Medical Education, which has proposed that medical schools located in states where training in abortion cannot be offered will be required to offer that training in other states—presumably through partnerships with schools in other states. Further complications for medical schools arise when training is provided across state lines. For example, the University of Washington medical school provides medical training for students from Idaho and Wyoming, both of which restrict abortion. While training specific to obstetrics and gynecology occurs only in Washington State, abortion training as background for family medicine doctors also occurs currently in the states that will be restricting abortion. It is not yet clear how the University of Washington or other institutions will change training in light of the conflict.

Most universities provide student health services, though the extent to which these services include abortion varies. The demand for abortion services by college students is not likely to be small. Reliable data is not available, but estimates based on demographically adjusted abortion rates in the population suggest that in California alone, students at public universities had medicinal abortions (using abortion pills) at a rate of between 300 and 500 students per month and in California community colleges at a rate of 800 to 1,100 a month. (California has approximately one million students in four-year public universities and approximately 1.2 million in community colleges.)

Student health services will also need to deal with increased demand for “Plan B” types of pregnancy prevention pills, which, even though they do not induce abortions, may still turn out to be restricted in some states. In many circumstances, there will be significant uncertainty over what is legally/politically acceptable, especially in coming months as institutions adjust to the new legal contexts in states. As an example, the University of Texas at Austin has recently removed a paragraph from its website informing students about options when pregnant. In June, Vanderbilt University established a task force to work out a response to Tennessee’s strong restrictions on abortion. The Federal government’s recently proposed changes to Title IX clarify that pregnancy, miscarriage, and abortions are conditions entitled to the same protections as other medical conditions (e.g., being medically excused from classes). Exactly how protections for pregnant students interact with restrictions on abortion—privacy protection for students seeking information about abortion, for example—will take some working out.

About one in five college students attends college out-of-state. Will fewer out-of-state students choose to study in abortion-restricting states and will more high school graduates choose to leave these states for college? The Washington Post gives the example of Rice University in Texas, where a quarter of the students come from states such as California where abortion remains legal while 40 percent of the students are from Texas and another 12 percent come from other states prohibiting most abortions. Will Rice see either an outflow of Texas students or a reduced inflow from California? It is too early for there to be evidence on the magnitude of abortion-restriction induced changes in student location choices. What we do know is that states with restrictive laws have hitherto imported out-of-state college students at roughly the national rate, with the exception of Texas where a relatively small portion of students are from out-of-state. What seems likely is that many universities will see little effect, as they have few out-of-state students and serve populations not likely to attend college out-of-state—but the enrollment risks for colleges where potential students have more options will be uncertain over the next several years.

Shifts in faculty locations away from anti-abortion states

If one believes the Twitterverse, many faculty are seeking to quit jobs in abortion-restricting states and move to more woman-friendly environments. (Anecdotally, motivations include protecting the health of young women faculty, bringing up daughters in restrictive states, and perhaps political discomfort from faculty who tend to be more pro-choice than the population at large in abortion restricting states.) It has also been suggested that universities can raid disaffected faculty in restrictive states. It is too early for there to be any real evidence on whether many faculty will move. It may be worth noting, however, that there is not any research currently on abortion access as a major determinant of faculty location before Roe, or in the face of more recent decreases in abortion availability in many states. In practice, faculty rarely move, especially once they’ve earned tenure. Our best guess is that the change in the law will induce fairly few moves but that the change may lead faculty who are moving for other reasons—notably, those at the beginning of their career—to favor destinations that have not imposed restrictions on abortion, impacting the recruiting opportunities for many colleges.

In summary, it seems certain that the loss of Roe will reduce college attendance of Black women in states restricting abortion. We expect that some universities will see shifts in student demand across state lines, but the magnitude of such shifts is not known. A variety of policies pertaining to both medical training and student health provision will need to be rethought. And while there may be effects directly on faculty, we anticipate that actual relocation of faculty will be relatively small, at least initially.

How do we solve social media’s eating disorder problem?