A Cycle Has Changed Inside Russia 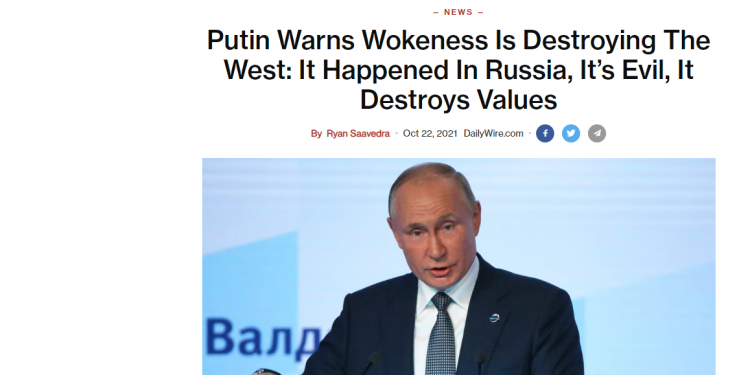 To my total shock, I know a family that fled Poland to flee from Russia and went to Canada. They then fled Canada because of all the insanity of Trudeau and refused to return. Since their visa for America is expiring, they said to me that they may now go to Russia. I was completely stunned. They said Western culture is pushing them to return from pronouns to canceling anyone who has ever said anything, even 25 years ago, and the total craziness in politics. What they once fled from is still far better than what is taking place here.

Every person I know here in America who fled from Russia when the USSR collapsed says the same thing. What they fled from is now here. Putin has come out and warned that wokeness is what destroyed Russia. His popularity in Russia is double that of Biden because he has turned Russia back to traditional values. Using the wrong pronoun is now offensive. I remember going to the Latin Casino in Cherry Hill, New Jersey, and seeing Don Rickels live in the ’70s. There was not a single race or ethnic group he did not make a joke about. There was a time when we once could laugh at ourselves. Those days are gone.

There is a cycle to everything. The culture shift in Russia is actually hopeful that we too will shed these restrictions of wokeness, and I will not be offended if you say, “Hey, you!” Civilization is when everyone comes together for mutual benefit. Wokeness is all about division. When you ask an American what are you, they will typically respond half-German and half-Irish or whatever their mix. That illustrates that America was the melting pot where everyone merged into one, whereas you do not see that in Europe except on rare occasions. This is what is being torn apart by wokeness, and we will see oppression and civil unrest that could lead even to civil war because of it.

When I was growing up there was just straight, gay, and bi-sexual. Today, I am told there are 70 distinctions. I have absolutely no idea anymore but it no longer makes one look upon everyone as equal. You suddenly have to stay to yourself and be afraid to address someone for being accused of racism or sexism or whatever new term they manufacture. We once were all Americans. I hired Robert Howe who was probably the first black analyst because he was qualified. Today, you get inquires from the state demanding to know how many minorities and women you have on your staff. We have every race and gender on our staff, as well as religion. Perhaps I am old fashion, but I never hire people because of quotas.

It’s not a question of patriotism, and it is not wrong for that family to suddenly say they are moving back to Russia all because of the political propaganda. The traditional values that once kept American culture as the beacon of light in a dark world have been overthrown. The public forum, where the people once discussed differences and enacted their laws as well as elected their representatives, has been enclosed by fences at times to protect it from the people, and the chamber that shined for the world as an example of freedom has been reduced to one of hatred and has been exploited by foreign agendas seeing a Great Reset. The public and private institutions that were founded for eternity lie naked and broken by partisan politics indistinguishable from the ruins of ancient Greece. Those stupendous relics of the past are all that has survived the injuries of time and the folly of men.

Today is a sad statement of our times. Our leaders not only preach war, but they also seek to divide our nation by turning brother against brother until our civilization exists no more. The Democrats have exploited every distinction to separate and divide us while seeking 5 years imprisonment for those who only entered the capitol and took a selfie all to paint their opposition with hatred.

The possession of wealth today only stimulates the hatred of others and any traditional rigid virtue of centuries now offends and warrants censure. The irregularities of voting are swept aside and those who seek to investigate are targeted as conspiracy theorists. Anyone who objects is always insured the aversion of those in power who search for any excuse to imprison them until death for their part.

Suspicion has merely become the equivalent of proof and any trial is mere pretense to condemnation. They seek the execution of Donald Trump and paint 50% of the people are worthless scum unworthy of a seat in their hallow hall of dictatorial wokeness power. Once they have tasted supreme power, they have become incapable of pity or remorse no less respect for human rights of liberty, and justice for all. Those words have become just propaganda as their meaning has crumbled to dust on the foundation that was once the bedrock of the American dream. Our highest standard of living has been pushed aside as racist or some other terminology crafted with an endless redefinition of the English language.

As I have been stating at conferences, Schwab will fail in his quest to seize control of the world with his unoriginal theories. The very cornerstone of civilization of bringing people together because it is mutually beneficial to all has been broken. The temple of freedom and dignity has fallen. These power-hungry people are separating and dividing us as they turn even families against one another. They vary from the above but can see no differently than Karl Marx who thought he could redesign society. The rise and fall of political states, Schwab believes, can be prevented if the people surrender everything that makes life worthwhile. Schwab and his co-conspiractor at the World Economic Forum seek to turn our corporations into fascist limbs of the state all preaching Schwab’s stakeholder economics and suppressing human rights for at the heart of all of this, there is no divine right because there is nothing divine about them. The future is only theirs to shape – no one else’s.

The world so many rebuilt post-WWII is collapsing — deliberately. It must always appear darkest before a storm and the new light of day that will arrive. We cannot save the institutions of today. We must plan for what comes after this house-cleaning we must go through. Academics such as Klaus Schwab have always presented the greatest threat to societies. Just as Putin said Lenin was just a Bolshevik and not a statesman, someone in the future will remember Klaus Schwab with the same dismissive comments. Posterity will remember his name as it remembers Marx, Hitler, and Stalin. Napoleon sought to conquer Europe, but he had no designs to change human nature.

The post A Cycle Has Changed Inside Russia first appeared on Armstrong Economics.

100% Democracy: The case for universal voting

Climate change, development, and conflict-fragility nexus in the Sahel

Preparing for the (non-existent?) future of work