Trump is not the only threat to democracy 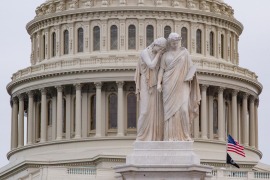 The investigations into the January 6, 2021 Capitol Hill insurrection reveal how close America came to overturning its democratic system. The peaceful transfer of power that has long characterized U.S. history was threatened last year and it took considerable effort on the part of many individuals to survive the challenges of Donald Trump and his allies. Disturbing testimony over the last few weeks revealed coordinated efforts to seat Electoral College electors who did not represent the winning side of the popular vote and lawyers who encouraged then-sitting Vice President Mike Pence to nullify two centuries of constitutional rule through the view that he alone could decide who won the campaign.

Yet it is a mistake to focus solely on Donald Trump’s role in these efforts. In my Brookings Institution Press book, Power Politics: Trump and the Assault on American Democracy, I argue there are several systemic threats to the future of democracy, such as copycat candidates, legal coups, a toxic information ecosystem, the decline of authoritative institutions, and the widespread prevalence of counter-majoritarianism in our political system. Trump represents an existential threat to our current system, but he is not the only challenge facing the country.

One of the problems we have now is the rise of copycat candidates who parrot Trump’s moves and endorse his anti-democratic tactics. Possible presidential candidates Ron DeSantis, Ted Cruz, and Josh Hawley as well as dozens of congressional candidates spread the Big Lie about 2020 election fraud and some Republicans show a willingness to have electors chosen who do not respect the popular vote winner within particular states.

One of the worst things Trump has done is to show many other aspirants how to engage in power politics using unethical steps. Between his unorthodox behaviors challenging the legitimacy of the 2020 results and his continuing efforts to push Republicans in illiberal directions, he has become a role model for many candidates around the country. Rather than seeing Trump as a dangerous demagogue who threatens our democratic system, many Republican candidates are mimicking his tactics and pushing the country down the road towards illiberalism.

Investigations into the 2020 election aftermath furthermore reveal a number of legal coup possibilities due to imperfections in current laws. Through devices such as the Electoral Count Act, emergency power declarations, the Insurrection Act, and voting changes that disproportionately benefit one political party, it is possible for leaders to exploit statutory deficiencies and gain power through undemocratic mechanisms.

For example, the Electoral Count Act is vague on key elements such as whether state legislatures have the power to appoint electors who do not represent the winning side in an election, how to handle allegations of ballot fraud, and the role of the vice president in election ascertainment. With the likelihood of substantial controversy surrounding the upcoming 2024 elections, it is vital for Congress to clarify these issues right away to avoid risky outcomes in that campaign.

There are similar possibilities for mischief via emergency power declarations and the Insurrection Act. The former allows presidents to declare national emergencies in key areas and rule unilaterally. Congress cannot overturn many of these actions and the major requirement for chief executives is to disclose the declaration and provide a brief rationale. The Insurrection Act was passed early in the nation’s history to empower the chief executive to deal with popular uprisings, such as Shay’s Rebellion, the Whiskey Rebellion, and battles with indigenous populations. Presidents could deploy state or national military forces without any authorization from Congress to put down anything from mass rebellions to public protests.

There are voting changes that advantage one party over the other that could skew democratic elections. For example, a number of states have enacted laws making it difficult for marginalized voters to cast ballots or through administrative actions that reduce the number of polling places in minority neighborhoods. These steps harm voters who historically have leaned towards Democrats and systematically aid Republicans. It isn’t likely that tanks and troops will decide the next election in classic coup style, but there may be legal changes or statutory loopholes that rig the election in favor of a specific party and enable perfectly legal coups.

The current information environment makes it easy to spread misinformation, disinformation, and outright propaganda that distorts voter representation and leadership accountability. Algorithms disseminate false information widely to millions of people and convince them to cast ballots in ways that run contrary to their self-interest or further internal political divisions. Leadership accountability requires voters have access to reliable information, but the prevalence of fake news and false information undermines democratic elections and endangers the system as a whole. We see these risks not just with elections, but with misleading information about mask mandates, vaccine requirements, and climate change, among other areas. All of these flaws in our information ecosystem harm democracy and weaken popular sovereignty.

The Decline of Authoritative Institutions

News organizations, universities, nonprofits, and think tanks are vital to democratic systems, yet they are under attack as experts are discredited and organizations whose missions are to hold leaders accountable and support democratic values fall under attack. There are threats to academic freedom that make it difficult for professors to transmit knowledge to the next generation and help students learn valuable critical reasoning skills. By delegitimizing knowledge sector organizations, these attacks weaken accountability and harm system performance. The undermining of civil society makes it difficult to address basic problems such as gun safety, climate change, and income inequality.

The United States has a political system that allows small groups of people to thwart action desired by large groups of individuals. Called “counter-majoritarianism”, this malady refers to institutions that overrepresent certain areas at the expense of others. One of the clearest examples is the U.S. Senate, which overrepresents small and medium-sized states. Because of the equal representation of Senators per state, California with 39 million residents has two Senators, the same as Wyoming with 581,000 residents.

The political success enabled by counter-majoritarianism allows Republicans to dictate policymaking, stack the federal judiciary, and dominate government actions. Bills supported by large numbers of voters languish and make voters cynical about congressional inaction. Stopping or delaying action wanted by large numbers of voters weakens public confidence in government and reduces trust in the integrity of the political system. Taken together, these maladies harm democracy and pose significant threats to the future of the United States.

Paying for cancer drugs that prove their benefit

How much do teachers struggle with stress and burnout?