Should Donald Trump be prosecuted? 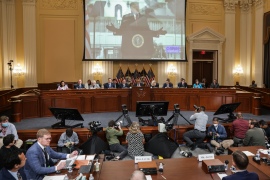 After eight congressional hearings investigating the January 6 insurrection at the Capitol, one thing is clear: there is enough evidence to prosecute Donald Trump on a variety of charges. The committee has the option to refer cases to the Justice Department for prosecution, but such a step is not necessary. The Justice Department could decide to prosecute at any time, on whichever charges for which they find sufficient evidence. Already more than 800 people have been charged in connection with the January 6 events—although most have been charged with lesser crimes. So far only 50 have pleaded guilty to felony charges.

But all along, the issue has been not what the 10,000 people who came to Washington D.C. for the rally knew or even what the 2,000 people who made it inside the Capitol building knew. All along the issue has been what did the president know and what did he intend? Was this a rally that simply got out of control? Or was it the first attempt ever by an American president to stage a coup d’etat?

If it was an attempted coup, it was a pretty pathetic and incompetent one.

From the hearings, we now know that Trump did not even have the support of his own family and friends nor his handpicked White House staff. To pursue his plans, he had to rely on a close group of advisors known as “the clown show” led by Rudi Giuliani, a pillow manufacturer, and a dot-com millionaire—none of whom was in government and none of whom controlled the most important “assets” (guns, tanks, planes etc.) needed to take over a government. In contrast to most successful coups in history, Trump had no faction of the military, no faction of the National Guard, and no faction of the District of Colombia Metropolitan Police at his disposal.

As we learned in some of the most recent hearings, it was Vice President Mike Pence who was in contact with the military and the police, and most importantly, the military and the police were taking orders from Pence not Trump, the commander in chief! During the entire 187 minutes between Trump calling for the mob to march to the Capitol and his meek video gently asking the mob to go home, he made no calls to the military, the National Guard, or the Metropolitan police. The Chairman of the Joint Chiefs of Staff, General Mark Milley was surprised that Trump never called him. Did Donald Trump really think that 2,000 people, many of whom were unarmed, could take control of the Capitol against a mobilized law enforcement and military—which, while late, did show up? Did Trump really think that a riot so dangerous that it sent one of his most loyal supporters, Sen. Josh Hawley running for his life through the halls of Congress would have the Republican backing needed to succeed? Did Trump really think that a riot could force Congressional leaders who were, by then, in secure locations in the Capitol Complex along with Vice President Pence, to delay their constitutional duties?

But an incompetent coup attempt could still be treason—defined as “the betrayal of one’s own country by attempting to overthrow the government through waging war against the state or materially aiding its enemies.” Many will argue that Trump committed treason, particularly because the definition of treason simply requires the “attempt” not success in overthrowing the government. However, there are other grounds to prosecute him. He could be prosecuted for “obstructing an official proceeding” in his efforts to block the Electoral College vote. He could be prosecuted for “conspiracy to defraud the United States” for his various schemes to overturn the election. He could be prosecuted for “dereliction of duty” for his refusal to intervene to stop the attack on the Capitol. He could be prosecuted for “inciting an insurrection.” Section 3 of the 14th amendment which was passed after the Civil War to keep Confederates out of office could be used to keep him from ever running for office again. It provides: “No person shall … hold any office, civil or military, under the United States, or under any state, who, having previously taken an oath … to support the Constitution of the United States, shall have engaged in insurrection or rebellion against the same.”

For some, the decision to prosecute is easy; no one is above the law, including Donald Trump, and the decision to prosecute should be based solely on evidence. But for others, prosecuting a former President of the United States whose followers maintain an almost cult-like loyalty to him is a decision with enormous consequences. Would a successful prosecution and perhaps jail time make Donald Trump a martyr and exacerbate the ugly divisions he has launched on the country? Prosecution would take place under the Biden Administration’s Justice Department which would, no doubt give birth to even more violent conspiracy theorists.

Is the end game really to put the guy in jail or is it, as Rep. Liz Cheney has maintained from the beginning, to make sure that Trump is never within 1000 feet of the presidency again?

The hearings themselves, absent any prosecutions, seem to be weakening Trump. A recent NYT/Sienna poll had Florida Governor Ron DeSantis moving into a strong second place behind Trump among 2024 Republican primary voters. The article points out that “His share of the Republican primary electorate is less than Hillary Clinton’s among Democrats was at the outset of the 2016 race, when she was viewed as the inevitable front-runner, but ultimately found herself embroiled in a protracted primary against Sen. Bernie Sanders of Vermont.” And in the Republican primaries for Congress to date Trump has a mixed record. His endorsed candidates have won some high-profile races such as the Republican Senate primary in Ohio and lost others such as the Republican gubernatorial and secretary of state primaries in Georgia.

Prosecuting Trump is not a simple matter of determining whether the evidence is there. It is a question embedded in the larger issue of how to restore and defend American democracy. The January 6 committee has done an admirable job so far arguing that Trump is not fit for office. They have led. In an ideal world the voters would follow with the final word.