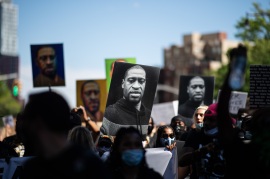 It’s been two years since the broadest protests in U.S. history erupted across the country after George Floyd was murdered by a Minneapolis police officer. There are many reasons why these protests were different from previous waves of activism against systemic racism: most of the country was reeling from more than 2 months of stay-at-home orders due to the COVID pandemic, responses to the protests by President Trump and law enforcement agencies around the country created an outrage multiplier, and turnout at these demonstrations included a much more diverse group of protest participants. Even though a lot has been written about the scope and scale of the protests during this unprecedented period of peaceful activism, much less is known about what led to the increased diversity of the participants who joined these protests.

In a new paper published in the Proceedings of the National Academy of Sciences, Stella Rouse and I ask why the post-George Floyd protests were so much bigger and more diverse than previous waves of activism in the US. Like recent studies of intersectionality of at large-scale protests, we focus on what motivated participants to join by analyzing data collected from a random sample of activists who participated in racial justice-focused protests in the summer of 2020.

As expected, we find that almost everyone who participated in these protests (94%) reported racial justice and/or police brutality/Black Lives Matter as one of their reasons for joining the crowds in the streets. In addition to these anti-racist motivations, protesters reported numerous other reasons for participating. About a-third of those surveyed also reported being motivated by women’s rights (39%), LGBTQ rights (36%), or immigration rights (29%) to join the protests.

Looking at what explains who selected these other motivations, we find that they were tied to participants’ personal identities. In particular, women reported also being motivated to join the protests by Reproductive Rights and Women’s Rights, people who identify as LGBTQ+ were motivated by LBGTQ Rights, and people who identify as Latino/a were motivated by Immigration Rights. Based on what we know about how numerous political and social movement organizations called for solidarity with the Black Lives Matter movement after George Floyd was murdered, many individuals who joined were likely activated by calls to mobilize from a range of groups. These collective efforts, coupled with identity-based motivations, and the moral shock of witnessing the murder of an unarmed Black man by a police officer over social media provided a dynamic catalyst for participation across race, gender, sexual orientation, and other salient identities.

In other words, not only did this moment hold salience for people concerned about racial justice, but it also mobilized individuals who felt connected to a number of other overlapping intersectional issues that were aligned with their personal sub-group identities connected to their gender, sexual orientation, race, and/or ethnicity. As a result, these mass mobilizations against systemic racism drew a broad crowd that included individuals with multiple identities that interacted to affirm group similarities.

This moment in the struggle against systemic racism in the U.S. provides important insights into how to get a critical mass in the streets that has the potential to motivate greater social change. By combining solidarity, identity, and moral shock, the movement was able to mobilize the masses and sustain their engagement throughout the summer of 2020. Movements that aim to employ outsider tactics like protest would be wise to learn from these mobilization strategies to attract a broad base of support and engagement.

The question that remains is how to translate such a diverse and prolonged mass mobilization into social change. Unfortunately, the effects of the protests in summer 2020 have been relatively disappointing so far, yielding mostly what Keeanga-Yamahtta Taylor calls “the low-hanging fruit of symbolic transformation.” Systemic racism is one of a range of progressive priorities that have highlighted the vast distance that must be traveled between protest and legislation or other forms of policymaking. Once the masses are mobilized to participate in sustained activism, there is still much to learn about how to channel outrage in the streets into enduring social and political change. There is no question, however, that the opportunities are substantially increased when protests are large, persistent, and include crowds that are diverse enough to be representative of the general American public.