Who are the 1 million missing workers that could solve America’s labor shortages? 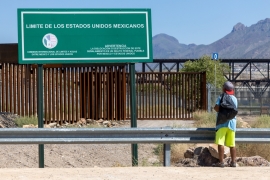 The recent tragedy of the death of over 50 migrants in an abandoned overheated truck in Texas forces us to reevaluate whether there is a better way for the United States—and there must be—to deal with the immigrants trying to reach the country.

This reevaluation includes not only adopting a more humanitarian approach to border policies, but also challenging preconceived ideas about these immigrants, which will allow us to embrace them as they are: much-needed workers that can complement the American workforce.

Our argument is simple; the U.S. workforce is aging and cannot meet the economy’s capacity. Yet, for nearly 20 years, U.S. authorities have deported over 1 million immigrants originally from Central America’s Northern Triangle to their home countries through Mexico. But these potential workers are essential to the U.S. right now: Historically immigrants have been young and have joined the workforce in occupations that very few Americans are able or willing to fill today.

The need to fill these occupations is evident from the market forces that continue to attract immigrants from Mexico and Central America, despite the incredible and increasing difficulties they face crossing the border. On the Mexican side, the use of “coyotes” (people smugglers) has gone up by 30 percent⁠—from about 45 percent in the second half of 2020 to nearly 60 percent in the last quarter of 2020⁠—as measured by surveys of returned Mexican migrants. According to these surveys, coyotes charged sums close to $6,000 per person smuggled in 2019, though that cost is reported to have gone down in 2020, presumably because of the slowdown in crossing caused by COVID-19. Nevertheless, the mere existence of this illicit market on the border is, arguably, a result of the dramatic increase in U.S. efforts—and resources—to stop this migration. In May 2022, U.S. Customs and Border Protection registered 240,000 encounters that month, up nearly 70 percent from May 2019, putting fiscal year 2022 on track to hit a record number of border encounters in recent history.

Despite the conditions at the border, a deep dive into the data speaks for itself on the need for the U.S. to drastically redesign its migration policy with respect to Mexico and Central America and to put forward legal pathways for immigrants to enter and work in the United States instead of trying to apprehend them at the border.

Let’s first look at the current American reality. According to the latest data from the U.S. Bureau of Labor Statistics, there were over 11.2 million job openings (May 2022). In the construction industry, there were an estimated 434,000 job openings (May 2022), yet there were just 389,000 unemployed in that same industry (June 2022). In other words, there is a shortage of almost 50,000 workers. In retail trade, the gap is even wider. With 1.14 million job openings and 720,000 unemployed, there is a labor supply deficit of 420,000 people. If that’s still not surprising enough: The number of unemployed people in the accommodation and food services industry is 565,000, while the number of job openings totaled 1.4 million. Even if every worker in that industry were employed, there would still be 835,000 job openings.

From a broader perspective, in just 12 years, adults 65 and older will outnumber children under 18 for the first time in the history of the United States. And shortly after, by 2040, projections suggest the country will have 2.1 workers per Social Security beneficiary. According to these calculations, the system needs at least 2.8 workers per Social Security beneficiary to maintain its economic feasibility.

Let’s now add into the equation some stylized facts about the 1 million workers that the U.S. has deported back to Central America since 2009. The data comes from representative surveys carried out by Colegio de la Frontera, a Mexican research institution that surveys deportees from the U.S. in Mexico’s south border on their way back to their home countries of Guatemala, Honduras, and El Salvador.

The vast majority of these deportees are men and have a high school diploma or less, according to the most recent data from 2019. They are also overwhelmingly young—with nearly 90 percent of them between the ages 15 to 39 and 65 percent being between the ages 15 to 29. Compare this to all other migrants in the U.S. who have a median age of 46 years.

Among the deportees that gathered some work experience in the U.S. during their stay (the ones who stayed for longer, naturally), they worked in a very diverse set of occupations that, ironically, have remarkable overlap with the occupations in high demand right now in the U.S. For instance, about 60 percent were in the construction industry, about 20 percent worked in services (such as the food industry), nearly 10 percent worked in industry, and 8 percent were technicians and administrative staff.

Migrants on the U.S. southern border are able and capable of filling labor gaps in the American economy if they are given the chance, particularly in fundamental occupations like the ones we document above. Moreover, perhaps with some skills training, they could fill other in-demand occupations, too.

American politicians and policymakers must act to transform the energy and resources poured into keeping these immigrants away into creating enough legal pathways for these migrants to join the American labor force without further delay. These migrants are already paying enormous costs, endangering their lives, and taking massive risks to come to America, which is a testament to their need and determination.

If the United States wants to grow and compete in the global economy, immigration—including that from the Northern Triangle—is part of the solution, not part of the problem.

Would Putin Use Nukes?

Should We Replace Racial Preferences with Socio-Economic Preferences?