Assessing UN state building in South Sudan, the Democratic Republic of Congo, and beyond 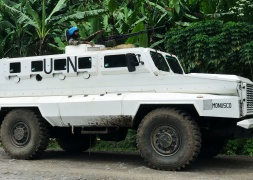 Despite massive international resources deployed to places such as South Sudan, the Democratic Republic of the Congo (DRC), Mali, Central African Republic, Libya, and Somalia, few have shown significant improvements toward more stable, inclusive, and accountable governance. After two years of one of the most ambitious U.N.-led state building missions in history, the U.N. mission in South Sudan gave up its state building effort to focus instead on protection of civilians in the face of a country-wide civil war in 2013. Twenty years after deploying to the DRC, the U.N. mission there now confronts more armed groups in eastern Congo than ever before, while its mission to extend state capacity and reform the security sector has achieved little. In Mali and Somalia, persistent governance challenges and erosion of international engagement has strengthened and attracted jihadi fighters and militias and private security companies.

On July 25, the Brookings Institution’s Initiative on Nonstate Armed Actors and Africa Security Initiative will hold a panel discussion exploring the following questions: What does the record of U.N. state building tell us about international intervention in today’s conflicts? What role should state building play in the U.N.’s response to the evolving situation in Yemen, Somalia, the DRC, and elsewhere? How is Russia’s invasion of Ukraine impacting U.N. stabilization and state building missions and what considerations should guide the design and implementation of such U.N. missions?

After their remarks, panelists will take questions from the audience. Viewers can submit questions via email to events@brookings.edu or Twitter using #NonstateArmedActors.

Are cities engines of production or consumption, and does it matter?

African democracy in 2022: 3 elections to watch

The War That Never Ends