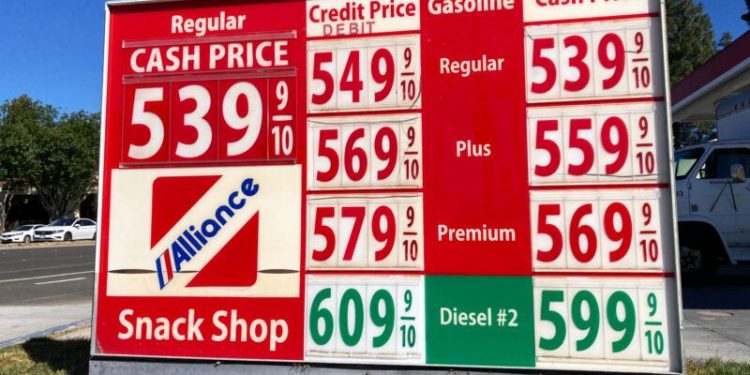 My message to the companies running gas stations and setting prices at the pump is simple: this is a time of war and global peril. Bring down the price you are charging at the pump to reflect the cost you’re paying for the product. And do it now.

On July 1, 2022,  the average price of gasoline in the United States was $5.34 per gallon. That’s down from the high of $5.47 per gallon hit two weeks ago, but still a historically elevated level.  On the New York Mercantile Exchange (NYME), gasoline futures prices are up 57% in 2022. Diesel recently topped $5.75 per gallon and now sits at $5.73 per gallon, its highest price in decades.

The largest factor input for both gasoline and diesel is the price of oil, which has eased back some over the last month. The major reason for the price declines in both oil and products derived from oil are a mounting accumulation of economic data suggesting that an anticipated recession may already be here. (The first calculation of the second quarter US GDP number will be released on July 28th.) But even despite the recent price declines, West Texas Intermediate (WTI) remains up over 37 percent in 2022, Brent Crude up 38 percent.

Both misinformation and disinformation are essential skills in politics, but under the pressure of rising inflation and slowing economic growth the current administration has expanded the practice to new frontiers. The tweet, which was undoubtedly not written by the President but to which he has lent his name, begins with a salvo directed at “the companies running gas stations.”

In fact, of an estimated 145,000 fueling stations across the United States, less than 5 percent (7250) are owned by refiners who would be, as the President says, “setting prices.” But even that small number of gas stations are not ultimately setting the price of gasoline. The prices first derived on world oil markets, a major contributor to which are decisions of the Organization of the Petroleum Exporting Countries (OPEC), are the major factor.

Further, more than 60 percent of retail stations are establishments singularly-owned by a family or an individual. And while the number has undoubtedly changed over the last decade, 2013 Census data reported that 61 percent of those stations are owned by immigrants. Thus the Democratic administration that rails daily against billionaires and “big companies” has taken direct aim at ‘mom & pop’ stores, in so doing assaulting the newest arrivals to the United States, upon whom it is clear the left and much of the Democratic Party stake their political future.

As for the present time being one of “war and global peril,” how tied the interests of the United States are to either of the combatants in southeastern Europe is a matter of opinion. If indeed peril is to be avoided, adopting a far more neutral stance than that which has tens of billions of taxpayer dollars and lethal weapons being sent 5000 miles would be a wiser approach.

But it is by admonishing gas station owners to lower their prices that what is deep-seated ignorance, profound dishonesty, or both are exposed.

In fact, even at the current prices, most gas stations earn a pittance from, or actually lose money, selling gasoline alone. According to IBISWorld, whereas the average US business has a profit margin of just under 8 percent (7.7 percent), the average gas station scrapes by at less than a quarter of that: 1.4 percent. At $5.34 per gallon, the average national price of gasoline over the Independence Day weekend, a 1.7 percent profit would come to $0.09 cents a gallon.

The Hustle estimates that after overhead (labor, utilities, insurance, credit card transaction fees, and so on), a gas station owner receives on the order of five to seven cents per gallon. Even selling a few thousand gallons of gasoline per day would only generate a few hundred dollars free and clear to the owner. Franchise City estimates that $50 spent at the gas pump goes

$30.75 to the oil company, $7.00 to refineries, $4.00 to the delivery company, $1.25 on processing and transaction fees, and finally right at the end of the chain you get $1.00. And that number can and does change, sometimes even lower, most owners suggesting an average [profit] of 1 to 3 cents net per gallon.

And none of this takes into account other costs and headaches which accompany gas retailing. Miniscule profits come with the costs and recordkeeping associated with environmental regulations at the local, state, and federal level. Competition tends to be fierce, with numerous locations clustering at high-volume transportation junctions. The price sensitivity of many drivers is active at differences of as little as one cent. Many stations operate 24/7 to maximize revenue. And for those which operate as franchises, in return for name recognition and some volume discounts the associated fees can be enormous. (Not only do franchisees have to pay fees to the parent company, they also have to price their product in accordance with national promotions, which can undercut profitability.)

The awful business economics of gas station ownership are, in fact, why large oil firms and refiners are not interested in it. And it is why they’ve reduced their exposure to the consumer-facing end of the energy sector over several decades. Unsurprisingly it is lousy financial prospects that have pushed fueling stations into retailing food, drinks, cigarettes, toiletries, and a wide variety of other goods travelers may want or need. All of those goods have appreciably higher profit margins than retail gasoline sales, and for many independent, single owner-operated service stations are the key to their very survival.

So why do so many immigrants choose a business with seemingly dismal financial prospects? Trisha Gopal explored that question in Eater a bit over a year ago; kindly remain mindful of Biden’s July 2nd tweet while reading her explanation:

As I speak to each owner, I realize the choice of a gas station is always a utilitarian one. When I ask her why they chose a gas station, Angelina Rizo gives me two answers. The first is one I hear from every restaurant owner I speak to: People need gasoline, so as long as people are driving, the more likely they are to have customers, and the more likely those customers will need something to eat. It’s an explanation rooted in the same immigrant mentality I’ve seen and heard my entire life: Look for opportunities, stay on your toes, and always find a way to be useful. When we wonder why immigrants are so entrepreneurial, it’s because so many of us are taught to first look to see where we are needed, and then, once we are there, go beyond.

There is a darker component to Biden’s redirection of blame as well. It is ironic that an administration built upon an ideological commitment to political correctness and the notion that words should be selected with surgical precision would message this clumsily. Gas station owners, a business community overrepresented by new immigrants to the United States, have frequently been targets of racist and xenophobic ire. Saddling them with blame for a particularly damaging aspect of the ongoing inflation increase is, beyond wildly inaccurate, irresponsible and morally unconscionable.

No one expects government officials, especially career politicians, to understand any of this. Neither have they any incentives to take real economic, financial, and business details into their static, oversimplified missives. The image of gas station proprietors as richly-compensated corporate executives at the helm of multinational corporations is one the Biden Administration has a vested interest in promoting. And there is no better measure of a political body out of ideas than an increasingly frenzied leap from scapegoat to scapegoat.

The future of American democracy: A conversation with U.S. Representative Jamie Raskin

The End of Ukraine – The Cyclical View