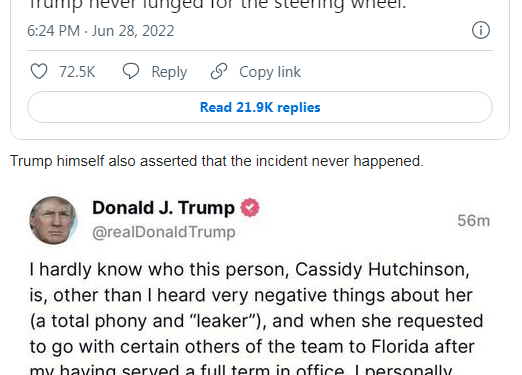 The story of Trump lunging for the wheel appears to be total perjury. The Secret Service said they would testify, but were not called because Cassidy Hutchinson appears to be the new Amber Heard 2.0 as she is starting to be called all over the place. She wanted to work in Florida for Trump a few days later after January 6th, but Trump rejected her application. Is this payback? She better be very careful now for if the Republicans take back the Hill, I would call her to the stand and dig into all those who coached her on how to testify and what to say. That is the way prosecutors handle their witnesses.

Anyone familiar with this type of limo knows that it would be impossible for anyone sitting in the back to move all the way forward and then reach over the driver and try to grab the wheel. She was coached on what to say and how to say it. This is more fake news orchestrated by Cheney just like her father did to create the Iraq War and hand billions of dollars to the very company he headed. I believe her father was corrupt and an evil person and she is proving that the apple does not fall too far from the tree. Cheney is now asking Democrats to change their registration to Republican so they can vote for her.

COMMENT:  RE: Recent article on Cassidy Hutchenson’s hearsay testimony.
I Martin, Thank you for all that you do. One thing to point out, Cheney is pretty much alone with her antics. The people of Wyoming DO NOT support what she has done. She has NOT acted as a Representative of Wyoming People, she is doing her own show. Our Primary elections will be held in August and you will see Cheney be dissolved. The polls are against her recently by 28 points. So no Wyoming doesn’t want to join California. We are of a different cloth.

REPLY: Thank you. Well, I normally stay clear of donating to politicians. However, I will be donating to whoever Trump endorses against this woman. If this was an honest mistake it is forgivable. But she is an attorney and she knows you CAN NOT introduce HEARSAY which is nothing but a rumor and if you ask Huctinsin, she cannot testify that what was said was true because she was not there.

Putting HEARSAY up like this is defamation of character and that is what is going on here because most Democrats will believe it simply because they hate Trump, which is what these people have been doing from the very start of his victory in 2016. This is NOTHING but propaganda to manipulate the Mid-Term Elections. I would haul Cheney into a real court and move for Conspiracy to commit treason against the United States. I for one would put her on trial for coaching witnesses and supporting perjury before Congress.

This has nothing to do with Trump anymore. This is about ending the propaganda from those who have occupied the Hill. Hopefully, by 2032 we get to start all over again. At least voting Republican will stop the WOKE nonsense and restore energy. However, they too will be cheering World War III simply because they will listen to the Neocons.