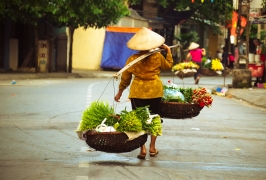 Micro-, small-, and medium-sized enterprises (MSMEs) constitute the backbone of most countries’ economies, representing about 90 percent of businesses and more than 50 percent of employment worldwide. Formal MSMEs contribute up to 40 percent of GDP in emerging economies, making them key to accelerating the achievement of the Sustainable Development Goals (SDGs), especially SDG 1 (no poverty), SDG 5 (gender equality), SDG 8 (decent work and economic growth), and SDG 10 (reduced inequalities). For this reason, the United Nations General Assembly has designated June 27 as MSMEs Day to highlight the contributions of these enterprises.

Central to the development of a vibrant MSME sector is entrepreneurship because it creates new businesses, which in turn create jobs, enhance competition, introduce innovation, and increase productivity. In the face of the unprecedented global challenges brought on by the COVID-19 pandemic, investing in women and diverse entrepreneurs has become central to inclusive and sustainable recovery and development. As East and South Asia remain the most dynamic regions with growing influence on the world economy, a brief overview of female entrepreneurial activities in these regions, particularly in Bhutan and Vietnam, will help focus attention on promoting needed structural changes in the economy to become more gender friendly.

Women’s entrepreneurship in Bhutan and Vietnam

Bhutan and Vietnam are among the fastest growing economies in East and South Asia and share many similarities in landscape, culture, and people. The Troika consisting of Bhutan, Thailand, and Vietnam has publicly committed to engaging in sustainable development and poverty eradication efforts. Against that background, women-owned MSMEs in these countries are growing rapidly. However, their ventures tend to be informal, small, and concentrated in low productivity sectors, which put them at greater risk in times of economic crisis. During the COVID-19 pandemic, for example, women entrepreneurs in these countries have suffered more than their male counterparts from temporary business suspension and permanent closures.

According to a recent study commissioned by the Bhutan Chamber of Commerce and Industry (2022) and led by 2014 Echidna Global Scholar Nima Tshering, 91 percent of businesses in Bhutan were negatively impacted by the COVID-19-related lockdowns and business restrictions, with women-owned informal and home-based businesses most affected. Similarly, in Vietnam 80 percent of women-owned businesses were among the most impacted sectors, as compared to 60 percent of businesses owned by males. The pandemic intensified major barriers women already faced, such as small networks, legal challenges, limited access to technology, and reduced time for education due to higher work-family conflict. In other words, women entrepreneurs are overrepresented at the base of the economic pyramid in general and with respect to MSMEs in particular.

Empowering women entrepreneurs to survive and thrive amid the pandemic and beyond: Education as investment

In response to the current economic crisis, some governments have put in place measures to support the survival of women entrepreneurs. For example, in Bhutan, entrepreneurial innovation has been promoted as a COVID-19 recovery strategy for businesses. According to the Minister for Economic Affairs Loknath Sharma, the “innovate first, regulate later” approach, which allows Bhutan’s entrepreneurs to open a business in under a minute, has been implemented as a solution to remove barriers facing women entrepreneurs. This is an important and relevant support because most of the women entrepreneurs in Bhutan are in informal, cottage, and small businesses. Furthermore, new capital business investments of less than 2,000,000 Nu (around U.S. $26,000) will be allowed to commence operations without requiring a license or regulatory clearance, except for those on the prohibited and controlled list. Likewise, in Vietnam where women still experience limited access to land and credit, the government has given financial assistance to enterprises affected by COVID-19—including a 15 percent reduction in land rental fees and a 2 percent reduction in loan interest rates—as an emergency response.

These policies may provide immediate supports to women entrepreneurs, but as countries move from recovery to development, due attention should be paid to interventions that balance short-term economic objectives with sustainability and resilience in the long run. A growing body of research demonstrates that no tool is more effective for doing that than education. Educated girls and women can “understand their social and legal rights, become economically independent, acquire a voice in the affairs of the family and the community” (Pachaiyappan, 2014, p. 187). As they exercise agency, greater gender equality can be achieved, economic performance enhanced, and development outcomes for future generations improved.

While access to education for today’s girls and women has dramatically expanded, they are still less likely to receive education than boys and men, which has major consequences on their personal growth and well-being. In Bhutan and Vietnam, the disproportional representation of women entrepreneurs at the bottom of the economic pyramid may have its roots, in part, in girls’ and women’s limited access to quality education. In Vietnam, according to a 2020 report by UN Women, lack of knowledge and skills is the major barrier facing women entrepreneurs. Investing in girls’ and women’s education, therefore, will put them in the fast development lane.

The Informal Economy Diagnostic Study in Bhutan conducted by the Ministry of Economic Affairs (2021) shows that 90 percent of workers in the informal economy have not completed secondary education, with 39 percent of women having no education compared to 34 percent of men. Bhutan’s data shows that girls’ quality education can have downstream implications for the economy. Modern education began in Bhutan only in 1961 and in 1970, only 2 girls were enrolled in primary school for every 100 boys. Half a century later, while Bhutan’s gender ranking for primary school as well as secondary school enrollment is 1st out of 156 countries, according to the latest Global Gender Gap Report 2021 by the World Economic Forum, Bhutan’s gender ranking for economic participation is a dismal 130th. It is also notable that Bhutan’s gender ranking for tertiary education is 117th, and women make up only 18.5 percent of senior executives or managers in the economy. Such data indicate that there may be a link between the educational attainment of girls and young women and their positions later in the economic pyramid, although the promise of gender parity in primary and secondary school enrollment is yet to be reflected in the economic sector.

It is important to take a more systemic and gender-transformative view of education that not only empowers girls as individuals—allowing them to develop needed skills and move up the economic pyramid—but also transforms the larger context of gender equality within a country that then promotes structural change in the economy. In other words, we must move toward a female-friendly economy and female-friendly entrepreneurial ecosystem.

Education for girls and women should go beyond access to school

Much of the conversation around MSMEs over the years has centered on increasing the number of female entrepreneurs. It is imperative now that we focus more on helping them grow their businesses and reach the upper levels of the pyramid, instead of being stuck at the base. Increasing access to education for girls and women has not been sufficient to reach this end. Rather, it is fundamental to focus on what we call the “gender intersection of education and economy streets” to address systemic barriers such as gender norms and stereotypes, as well as the specific needs of girls and women.