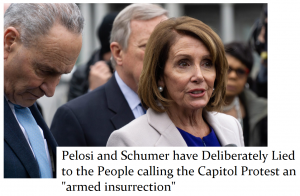 Abortionists stormed the Wisconsin state capitol building. They interrupted an ongoing special session and demanded that lawmakers overturn their rulings, interrupting a democratic process with screams and chants. There will be no news of this in the mainstream media. There will not be a January 6 manhunt for anyone who “stormed” the capitol.

Anyone who entered or even attended the January 6 protest has been tracked down and arrested. They claimed that the protestors on January 6 were violent, which could not be farther from the truth. This group backed by Planned Parenthood has a violent past. One supporter already tried to kill a Supreme Court justice, while others have burned down churches and businesses that do not support their beliefs. Will the lawmakers at the capitol cry on television like AOC and Pelosi and claim they feared for their lives? No. Did anyone care when a man with zip ties, a knife, and a gun attempted to enter the home of Justice Kavanaugh? No.

The left is permitted to commit crimes and terrorize the country with zero repercussions.

The post A Pink Insurrection first appeared on Armstrong Economics.