Realizing the New Urban Agenda in Africa: The centrality of local politics 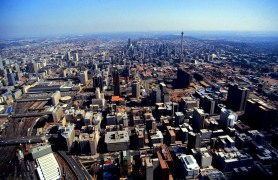 Twenty years ago, UN-Habitat convened the first World Urban Forum in Nairobi, Kenya, to address the challenges of managing rapid urbanization and harnessing its potential. On June 27, 2022, the biennial event will launch in Katowice, Poland with a focus on addressing the range of concerns confronting cities today, from rising food prices to the effects of the COVID-19 pandemic on local finances to the threats from climate change on infrastructure and housing. These and other crises are viewed as potential barriers to achieving holistic urban transformation, as conceived in the UN’s New Urban Agenda and epitomized by Sustainable Development Goal 11’s aspiration to “make cities and human settlements inclusive, safe, resilient, and sustainable.”

Nowhere are the challenges of urbanization more pronounced than in sub-Saharan Africa, which  currently has the fastest urban population growth rate in the world and is projected to contain 13 of the world’s 20 largest urban areas by the end of the century. The Africities Summit held in Kisumu, Kenya last month emphasized that this growth is no longer concentrated in capital cities. Intermediate cities, defined as those with populations between 50,000 to 1 million people, are also facing sizeable pressures.

Stimulating urban transformation in African cities requires just as much attention to multi-level governance and mechanisms of accountability to urban residents as it does to investing in productive jobs, transport, housing, and other services. Within Africa, at least three debates frequently emerge regarding how governance at the local level should be structured to meet these multiple objectives. These revolve around the mode of selecting mayors, whether local government representatives should compete on a party ticket, and whether it is justifiable for central governments to remove democratically elected local leaders for the sake of improving service delivery.

Power to the people?

One area of debate revolves around how mayors should be selected. Direct elections allow all the constituents in a city to choose their mayor, while indirect elections require voters to elect candidates to represent their neighborhood, and those candidates in turn decide who should be mayor. By contrast, in an appointment system, which represents the most limited form of political decentralization, the central government select mayors. Although most Latin American countries have directly elected mayors with executive powers, and many cities in Europe, North America, and the Pacific shifted to direct election of mayors since the 1990s and early 2000s, most African mayors have relatively restricted political autonomy. Direct mayoral elections occur in only a few countries in the region, such as Madagascar, Senegal, and Zambia. Most others have indirect elections while a few, such as Angola and Ghana, rely on presidential appointments.

There are potential benefits and disadvantages to direct versus indirect elections, though the benefits seem to outweigh the drawbacks. On the one hand, because direct elections tend to lead to more independent candidates, they can undermine party institutionalization and allow personality politics to take precedence. For instance, in 2018, Mozambique moved from direct to indirect elections after several independent candidates began winning mayorships of large cities formerly held by the two main parties, Frelimo and Renamo. On the other hand, direct elections can enhance accountability to voters and clarify lines of authority for service provision. Moreover, directly elected mayors are believed to be accountable to the entire city rather than simply just their own neighborhood constituency, and often are less vulnerable to recall due to intra- and inter-party tensions. The latter can be especially disruptive to service provision in cities run by party coalitions, as is increasingly the case in South Africa, due to frictions over budget allocations among coalition partners.

Recent developments suggest that direct elections are favored by the public in several countries. For instance, leading civil society organizations condemned an ultimately failed attempt in 2020 by the former Zambian President Edgar Lungu to reverse the 2016 constitutional provision allowing direct mayoral elections. In Malawi, the option for citizens to directly elect their mayors, a long-standing demand of local civil society, finally has been proposed as part of the amendment of that country’s Local Government Act. And almost 70 percent of Ghanaians would prefer the opportunity to directly elect their own mayors rather than continue with the current system of presidential appointments.

A second area of ongoing debate is whether local governments should consist of independent or partisan council members. While some fear that partisan competition hurts service provision, non-partisan elections can sometimes favor incumbents because, without party cues, voters can only rely on name recognition. In addition, nonpartisan elections sometimes depress turnout because voters lack sufficient information to assess the quality of candidates. Although Ghana’s local voter turnout is notoriously low, district assembly members who support the appointed mayor must be independent. In December 2019, President Akufo-Addo canceled a planned referendum that would have allowed Ghanaians to choose whether they wanted to allow district assembly candidates to compete on a party ticket. He cited concerns from the opposition party and traditional leaders that partisan competition at the local level would detract from service provision.

The same justification was offered in Sierra Leone where the ruling Sierra Leone People’s Party wanted to shift to nonpartisan elections for mayors as part of the amendment of the country’s 2020 Decentralization Policy. Concerned that this would weaken the ability of opposition parties to build national recognition through urban strongholds, all of the main opposition parties have been lobbying against the move.

A third area of contention is whether central governments are justified in rescinding local government functions—or even removing elected mayors—for the sake of improving service provision. A well-known case occurred in 2009 when President Museveni took away powers from the executive mayor of Uganda’s capital city, Kampala, and created the Kampala Capital City Authority with an appointed manager. More recently, President Kenyatta cited poor provision of services as the reason for revoking in mid-2020 a majority of functions of the Nairobi City County that the 2010 Kenya Constitution had previously devolved to the county’s governor. Through the creation of the Nairobi Metropolitan Services (NMS), the military essentially became responsible for several key functions and a majority of the city’s budget. Whether and how management of the capital city will revert to the county governor after the August 2022 presidential and gubernatorial elections remains an open question.

Opposition-led city councils are particularly prone to central government interference, as is clearly demonstrated in Zimbabwe. Since 2008, when the opposition Movement for Multiparty Democracy (MDC) began winning control of urban councils, the ruling ZANU-PF repeatedly has suspended or dismissed mayors in Harare and other big cities, thereby worsening service provision. Indeed, this period has coincided with mountains of uncollected garbage, burst sewage pipes, and a lack of clean water. By-elections held in March 2022 to elect new councilors resulted in the opposition Citizens Coalition for Change (CCC)—successor to the MDC—winning a majority of council seats. However, the minister of local government recently removed the CCC’s selected mayor and reinstated a new one, despite a high court ruling claiming the suspension was not legal. Consequently, management of Harare continues to be paralyzed because both councilors claim they are the mayor.

Stimulating urban transformation in African cities requires just as much attention to multi-level governance and mechanisms of accountability to urban residents as it does to investing in productive jobs, transport, housing, and other services.

In the report submitted by the UN Secretary-General in March 2022 to assess progress toward implementing the New Urban Agenda, minimal attention was given to the importance of accountability from urban leaders to the residents they serve. Yet, as the foregoing discussion highlights, debates about how to best demand and structure that accountability are clearly contentious in Africa. Even though many cities are grappling with similar challenges, the way leaders are selected to tackle them—let alone the legal mandates to implement reforms and the resources to finance them—are vastly different, with important consequences for meeting Sustainable Development Goal 11. Greater attention to comparative urban governance structures and multilevel politics is therefore critical to identify meaningful entry points for achieving truly inclusive cities in Africa.

PRIVATE BLOG – The Plan to Rig the ’22 Mid-Terms