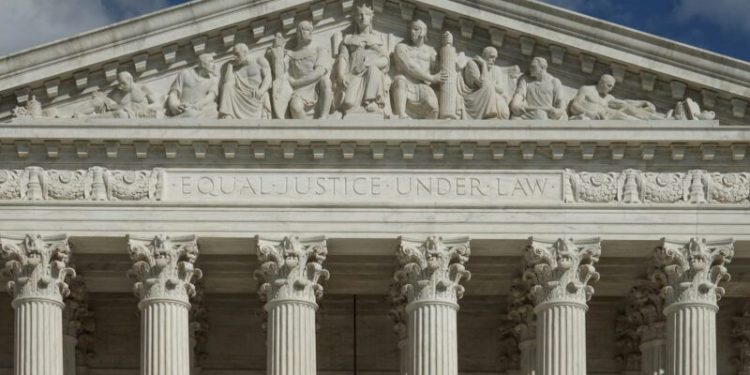 To what extent can a selective educational institution advantage certain racial groups in admissions decisions without discriminating against other groups simultaneously? How can said institutions balance external demands for fairness and group representation with their core mission to educate students sufficiently? How much influence should an institution itself wield, compared with other stakeholders (including the American public), in determining the desirability of a diverse student body? Answers to these thorny questions should be made clearer later this year with an anticipated Supreme Court ruling in the racial discrimination cases against Harvard University and the University of North Carolina (UNC).

On May 9, 2022, my group filed an amicus brief with the U.S. Supreme Court to support the plaintiff, Students for Fair Admissions (SFFA). This is the third friend-of-the-court filing we have submitted to urge our nation’s highest judicial body to revisit its previous rulings and clarify the legal parameters surrounding race-consciousness in college admissions. Brilliantly crafted by our partner organization, the American Civil Rights Project (ACR Project), this latest document makes two arguments against the current paradigm of race-preferential admissions. Both positions are also applicable when one scrutinizes race-conscious decision-making in general.

1) Universities Should Not Be Both Actor and Director

What has emerged from previous Supreme Court decisions is a widely accepted judicial doctrine known as “strict scrutiny.” This doctrine contains two components: namely, “compelling interest” and “narrow tailoring.” A compelling public interest in the use of race in policymaking must involve protecting national security, remedying sufficiently documented historical discrimination by the government, or advancing the educational benefits of a diverse student body. Narrow tailoring, meanwhile, means that an institution must prove that it has tried all workable race-neutral alternatives and that a race-preferential paradigm is absolutely necessary to accomplish one or more of the three compelling interests.

In reality, the paradigm of strict scrutiny has translated into an incoherent and illogical set of conflicting standards, chiefly because Supreme Court rulings in affirmative action cases (Grutter v. Bollinger, Fisher I, and Fisher II) have consistently given universities the authority to justify racial discrimination. In other words, courts have deferred to universities and colleges to make academic judgments on whether race-based affirmative action is warranted. How can a discriminator be both judge and jury, actor and director when it comes to an admissions paradigm that requires clearly delineated exceptions to our constitutional principle of equal protection under the law?

In practice, allowing the discriminating party to declare its own innocence renders strict scrutiny a legal excuse for unconstitutional racial preferences, a problem that can be resolved only by the Supreme Court. More importantly, strict scrutiny’s circular feedback loop with no independent oversight has given rise to a larger societal ill far beyond Harvard and UNC: the mushrooming of a diversity ecosystem predicated on the faulty premise that racial diversity is an unchallengeable educational commodity. Nowadays, one can hardly find a U.S.-based higher education entity that does not pride itself on core values of diversity, equity, and inclusion (DEI) in all aspects of operations. For instance, the California Community Colleges, our country’s largest system of higher education, is entertaining a regulatory proposal to mandate minimum DEI standards for employee evaluation and tenure-review. Northern Arizona University now requires its students to fulfill two “diversity requirements” for graduation. Many similar developments have occurred elsewhere and transcend the realm of student admissions.

2) How About Deferring to the American People?

My colleague, law professor Gail Heriot, has commented on the urgent need for the Supreme Court to turn back from deferring to universities and instead to consider public opinion. “If the Court was going to defer to anyone,” Heriot has stated, “it should have been the American people, who have made it clear over and over again that they do not support race-preferential admissions.”

Professor Heriot is absolutely right about “a stable, broad-based, national consensus” for equal protection and against racial preferences, as our amicus brief explains in great detail. This consensus is best evidenced by the parallel tracks of public opinion polls and statewide voting histories. Specifically, as indicated by almost every major public opinion survey on the topic, a growing supermajority of Americans across the political aisle and of all races don’t support racial preferences. Additionally, voters in two of America’s leading progressive states, Washington and California, have resoundingly rejected ballot measures that would have repealed bans on racial preferences. Public support for equal protection was most pronounced in deep-blue California, where over 9.65 million people (57.2 percent of the electorate) voted to keep racial discrimination illegal in 2020.

On the other hand, time and again, those who consistently endorse race-consciousness are a small, self-interested consortium. This group consists of like-minded academic peers, government agencies, and associations invested in the diversity status quo.

Let’s play devil’s advocate here. Tocqueville warned about the “despotism of public opinion” and the “tyranny of the majority” as potential hinderances for a liberal democracy. Supreme Court justices are expected to make decisions that are grounded in principle rather than conforming to sociopolitical consensuses. However, our amicus brief draws a distinction between public opinion for racial discrimination and opinion against it. We argue that, in the latter instance, social consensus is not a fashion of the moment that must be guarded against in judiciary judgments. Rather, it is in harmony with the letter and spirit of the 14th Amendment to the Constitution and should be heeded by the Supreme Court.

The insatiable desire for racial diversity does not guarantee the intended results.Clearly, supporters of enforced racial diversity represent a factional passion in direct conflict with the rule of law. Instead of satisfying a compelling public interest, their version of diversity has legitimized a multi-billion-dollar, largely unregulated industry. Collectively, industry players channel both public funds and private money towards university bureaucrats, market consultants, non-profit associations, and accreditation agencies to perpetuate the inaccurate presumption that racial proportionality is a public good with key educational benefits. Ironically, just like the prolonged failings of race-based affirmative action, the insatiable desire for racial diversity does not guarantee intended results.

According to a recent survey commissioned by the University of Wisconsin-Madison, “marginalized student groups” still report not feeling “welcome, safe and respected,” even though the campus has expended millions of dollars on diversity initiatives. Indeed, the most fundamental problem with DEI is substantive: The pleasant-sounding concept often signals shallow, cosmetic diversity, illiberal equal outcomes, and exclusion of (even penalty against) dissent.

Given the principle of equality and the prevailing demands from the American people, the Supreme Court should end its experimental departure from equal protection under the law.

The challenging future of long-term care for older adults

Something Smells About the Raid of Trump

TechTank Podcast Episode 40: A conversation with Jessica Brandt and Emerson Brooking on the information wars in the Russian invasion of Ukraine