Of Patriots and Freedom 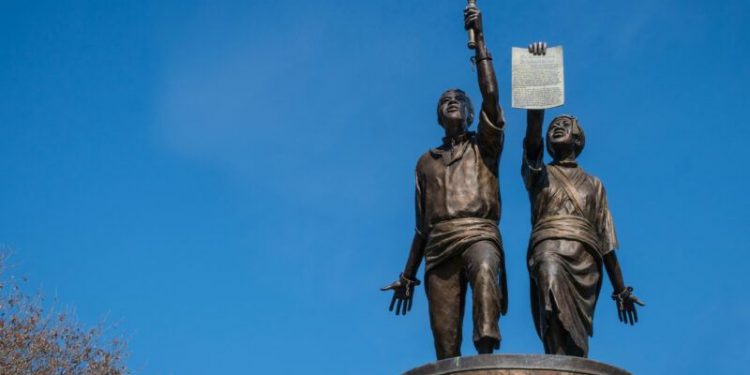 We celebrate a number of holidays every year in the United States, and while each has its partisans, there aren’t many that get to the heart of who we are as a people. Indeed, few could. We manage to find the worst in each other in just about every aspect of public life, and we show little interest in finding our best. We are at our hurtful best every Columbus Day, Halloween, Martin Luther King Day, and even Presidents Day. There is almost no such thing as a day of celebration that won’t bring with it legions doing their best to exercise the heckler’s veto.

Frankly, it makes most of us tired. But the fear of finding themselves at the end of the nearest pitchfork keeps most people of good will quiet.

Of all of the American holidays, only the 4th of July has been given anything resembling a free pass. It’s hard to find the racist root of Independence Day, a day commemorating when a bunch of white guys told another group of white guys to go pound sand. It’s not like no one’s trying, though. And we have been acclimated to offer nothing but silence in the face of even the kookiest of racial claims.

And that’s as good as it gets. Coming in a distant second is Thanksgiving, and it’s a distant second in no small part because every candid person will admit that the native people who shared a meal with the earliest settlers paid a dear price in the years that followed. Still, it seems we can have a national day of Thanksgiving even so, and that maybe the fuller story is worthy of celebrating as much as a remembrance as a holiday.

After Thanksgiving, there isn’t much that we celebrate that allows us time to reflect on what unites us as friends, neighbors, and countrymen. But it is exactly this gap in our public celebrations that recommends two holidays that can draw us together. And they can draw us together because the best of us want to celebrate our shared lives.

The first of these, Patriots’ Day, was born of an 1894 Massachusetts compromise. The towns of Lexington and Concord each wanted a holiday in their own name, putting Governor Frederic T. Greenhalge in a bit of a bind. Greenhalge used the moment to recognize what the people of Massachusetts had known for well over 100 years: The battles of Lexington and Concord were pivotal to the cause of American Independence. The biggest battle on April 19, though, was the Battle of Menotomy.

Pointing to all three battles, he offered the compromise of Patriots’ Day. And while Independence Day has always celebrated the machinations of America’s colonial ruling class, in this instance a well-deserved celebration, Patriots’ Day was a nod to the reality that everyone knows: Without patriots to fight for the cause, Independence would never have happened.

Which brings us to the second. Juneteenth commemorates the emancipation of the last slaves in the United States on June 19, 1865, when Union Army General Gordon Granger proclaimed freedom for enslaved people in Galveston, Texas. There were other dates recommending themselves. Lincoln’s Emancipation Proclamation of January 1, 1863 was the most obvious of these. But the Emancipation Proclamation, given that it was directed at slaves in the Confederacy, never freed anyone. Also obvious was the 13th Amendment, which rendered slavery constitutionally inadmissable on December 6, 1865. But that was simply some wording after the fact. And while that wording was without question important, it was not as viscerally important as an announcement of freedom to people who had no idea they were no longer slaves.

And what could have brought the American Experiment into closer focus than a celebration of what countless unknown people sacrificed for a cause much bigger than themselves?

Juneteenth, too, is a celebration for all of us. Because what is a better thing to celebrate than the liberty all Americans know to be their birthright? This is not a partisan victory, nor is it one of one time or another. It’s a universal victory, because the cause of freedom is the cause of everyone.

April 19 and June 19 show us how ordinary people did extraordinary things. It’s a debt that we can never repay but by paying it forward. Would the rank and file Massachusetts men who fought the first battles of the Revolutionary War want much else from us? Would the freed slaves?

The World at War